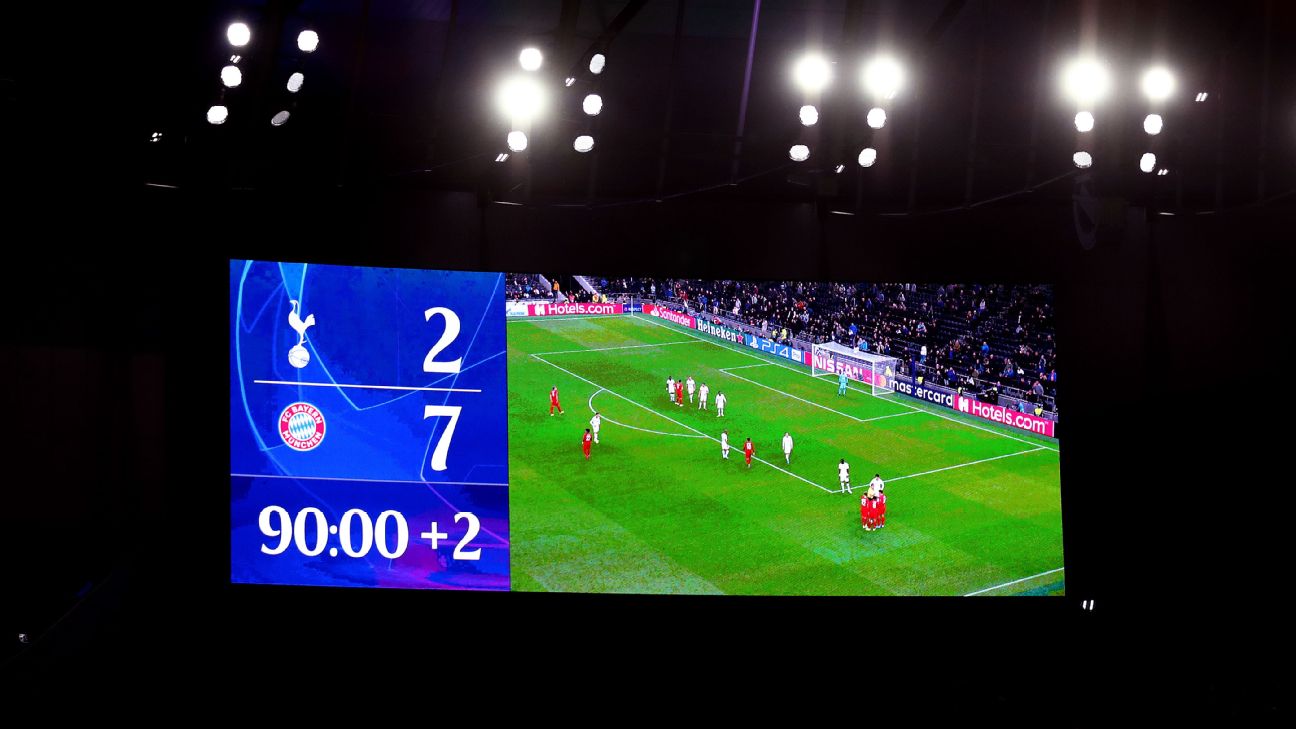 Bayern Munich’s ruthless 7-2 devastation of Tottenham in the Champions League group stage on Tuesday night is certainly right up there in the UEFA annals — Arsenal fans, don’t get too cocky about it as your team didn’t do much better – but it’s not the biggest single-match win in tournament history.

No, barring the preliminary rounds of the competition, the biggest margin of victory ever amassed in the Champions League is 8-0, while the most goals scored in one match is 12 — Borussia Dortmund 8-4 Legia Warsaw in 2016.

Real Madrid were the first to administer an octo-drubbing when they netted eight unanswered goals against Sevilla at the Bernabeu in the 1957-58 European Cup quarterfinals, but seeing as modern football has the Champions League starting in 1992-93, here are the top scoring games to date from the competition in its new format.

And here’s a list of the other seven goal margins:

If you score four goals, you expect to be given a perfect 10 for your performance but it doesn’t come that easily for French paper L’Equipe.

The publication is notoriously stingy for giving 10/10 in its player ratings and has only done so 11 times previously in history — twice to Lionel Messi.

However, after Serge Gnabry’s four goals for Bayern in the 7-2 win over Tottenham, you can make that 12.

Gnabry, a former Arsenal player, was delighted with the win over his former club’s rivals and used an old favourite to refer to the “red” of Bayern taking over London.

Arsenal were looking for a winger in the summer … just saying.

Club Brugge striker Emmanuel Dennis was so certain that he wouldn’t be able to breach Real Madrid’s defence that he went all out and promised to get a tattoo if he scored at the Bernabeu on Tuesday night.

“This is a dream. A lot of people didn’t even think they would come here to play. If I score then I will get a tattoo on my skin,” he said during a video posted on Brugge’s Youtube channel before kick-off.

It took the Nigerian forward precisely nine minutes to break the deadlock, bumbling a shot past Thibaut Courtois to propel Brugge into a shock early lead.

Dennis then added a second goal shortly before the break, which he marked by mimicking Cristiano Ronaldo‘s trademark “Si!” celebration.

All Glory To GOD +one point
What a dream in Bernabéu
⚫️🔵❤️❤️🙏🏽 pic.twitter.com/vBE81VfCPh

Real eventually restored parity to salvage a 2-2 draw, but that won’t prevent Dennis from sticking to his word and keeping up his end of the bargain.

“I guess I will now have to get two tattoos,” he told Belgian broadcasters RTL after the game.

It’s taken the best part of 15 years, but somebody has finally succeeded where Thierry Henry and Robert Pires failed all those years ago.

Indeed, Shakhtar Donetsk’s Under-19 side avoided the embarrassment suffered by the two aforementioned Arsenal legends by successfully dispatching a two-man penalty routine.

Henry and Pires made a horrible mess of the same Cruyff-inspired manoeuvre during a game against Manchester City back in 2005.

Nice to see that it’s still exactly as awful as we remember it being.