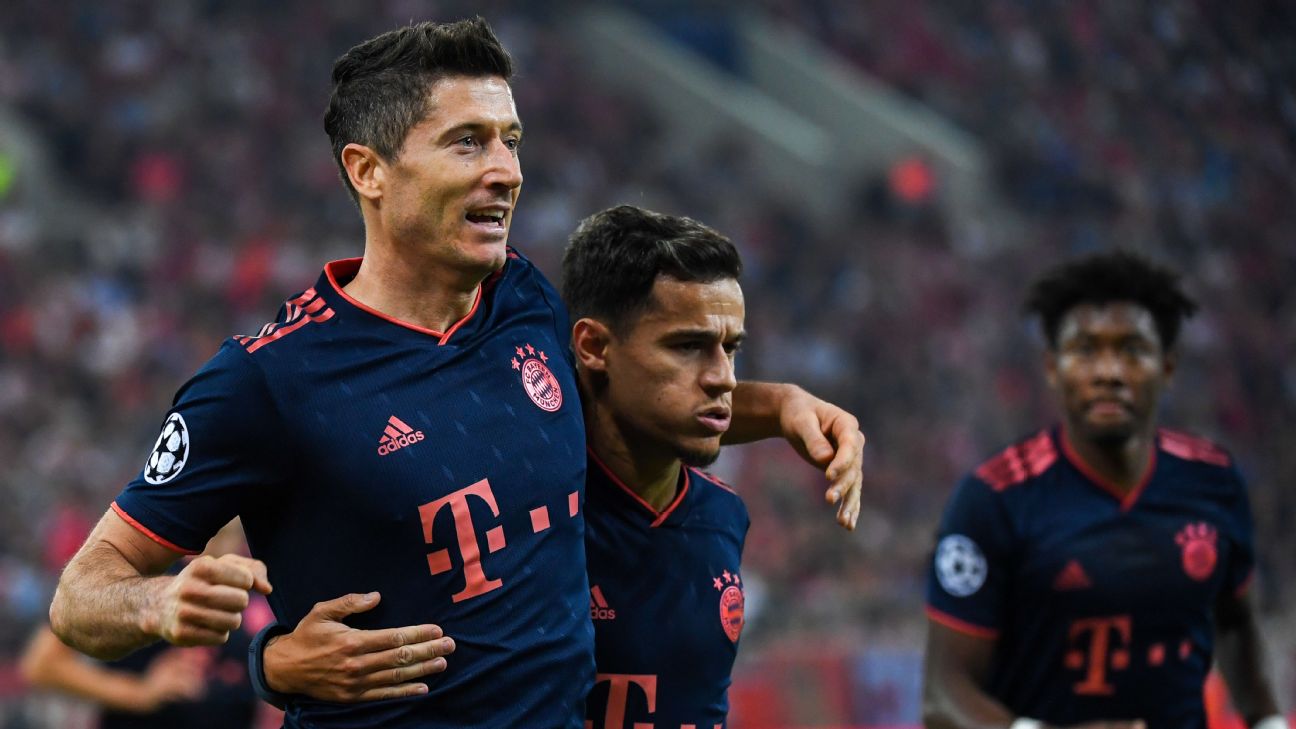 Lewandowski scored twice in Bayern’s 3-2 away win at Olympiakos on Tuesday to take his remarkable goal-scoring tally in 2019-20 to 18 goals in 13 appearances in all competitions, and while such form has seen him nominated for the Ballon D’Or, it has also attracted the interest of Zinedine Zidane, who is keen to add further firepower to his attack.

Madrid are just one point behind La Liga leaders Barcelona but their form in Europe, until Tuesday’s 1-0 win at Galatasaray, has been patchy.

Zidane is hoping to secure the Pole as his marquee signing with the Paul Pogba move now seemingly dead in the water.

Lewandowski is 31 so represents a short-term solution for Los Blancos, and because he’s contracted until 2023 it could cost more than €70 million to prise him away from the reigning Bundesliga champions.

Zidane is also keen on freeing up some money with the sale of players such as Brahim Diaz to get the Christian Eriksen deal over the line too.

Mandzukic cuts salary demands in half to force United switch

Okay, so you probably think you’ve heard enough about Manchester United’s quest to sign Mario Mandzukic in January. The deal looks almost certain to be made once the transfer window reopens, and the Sun are reporting that the Croatian has agreed to lower his salary demands in an effort to ensure the move goes ahead.

United are desperate for a new striker and Mandzukic needs a move away from Juventus as he searches for regular football as a result of his game time being severely limited so far this season.

The move had been on the cards in the summer but fell through as a result of Mandzukic’s £300k-a-week wages, which he has now agreed to slash so that the deal can go ahead.

The paper reports that the striker will look to include a number of goal and match-related bonuses into his contract instead.

Mandzukic still has other offers, believed to be from China, though he is said to favour a move to England.

Hearts full-back Aaron Hickey is a wanted man and while the Sun says that up to seven English clubs are queueing up for his signature, they suggest that Manchester City lead the way.

Hickey, just 17, would appear to be the next box office full-back to appear from north of the border since Kieran Tierney‘s performances saw him move to Arsenal from Celtic in the summer.

The Ibrox directors box was full at the weekend for Hearts’ visit to Rangers with scouts from clubs including Arsenal, Newcastle United, Liverpool and Southampton all keeping tabs on the youngster.

Pep Guardiola is in the market for full-back cover which means Hickey could be in line for a big-money move.

Hickey has started seven times this season — 15 appearances in total — scoring one goal. Last season he became the youngest ever player to feature in a Scottish Cup final when he lined up against Celtic at Hampden Park.

– Dietmar Hamann believes Liverpool are keen to sign Jadon Sancho from Borussia Dortmund, according to the Mirror. The former Germany international has links at both Liverpool and Sancho’s old club Manchester City, and he has been told by a Liverpool insider that Jurgen Klopp is planning to move for the talented English winger next summer.