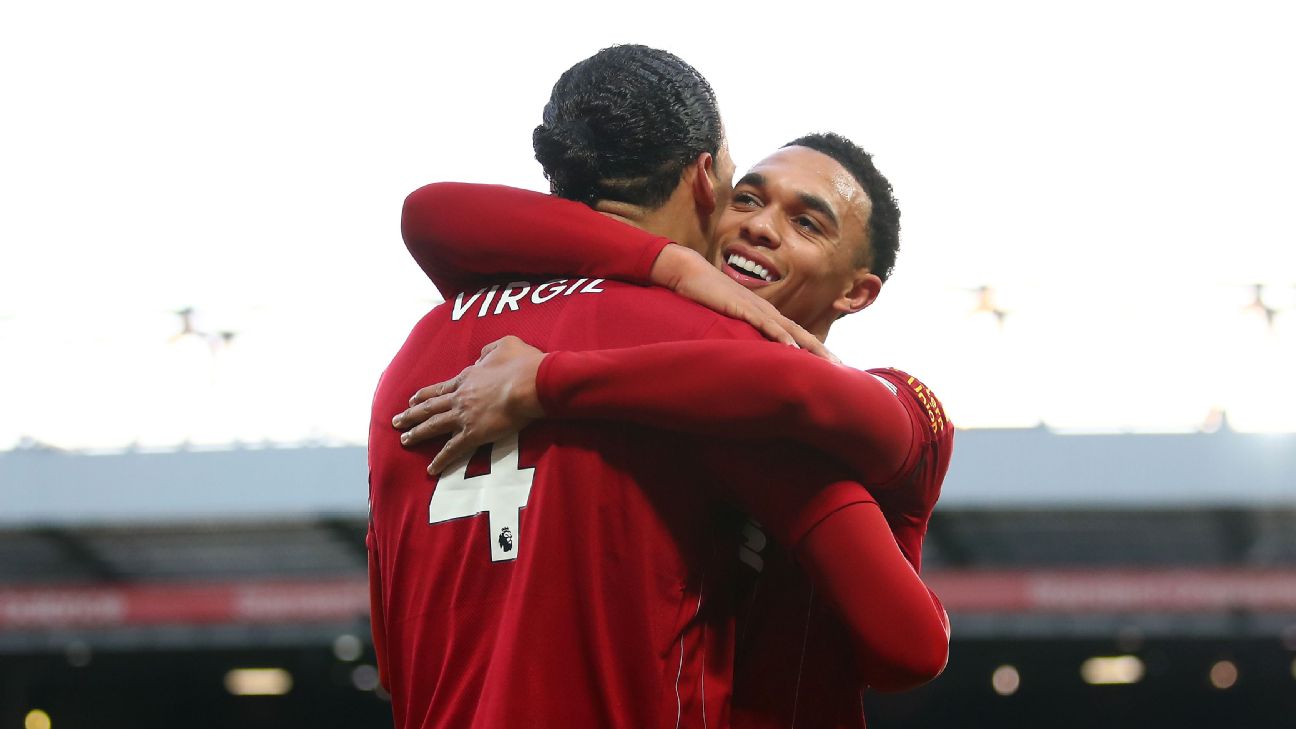 Liverpool moved 11 points clear at the top of the Premier League table with a 2-1 win over Brighton at Anfield. The Reds seemed to be coasting to victory courtesy of two goals that were created by Trent Alexander-Arnold and finished by Virgil van Dijk.

But the home faithful were forced to endure another grandstand finish following Alisson’s dismissal for a baffling handball. Lewis Dunk took advantage to tuck home the free kick with Liverpool switched off. From then on it was a nervy finale, but the hosts held on.

Liverpool made it 13 wins in 14 league games and extended their unbeaten run to 31 matches in the process. Vian Dijk, in particular, had a sensational individual performance, steering home two excellent headers to propel Liverpool to their best ever start to a Premier League season.

The hosts were caught napping from Dunk’s free kick and have now failed to keep a clean sheet in 12 league games and are yet to shut out the opposition at Anfield this season. This one came at an even bigger price, with Alisson’s baffling handball ruling the Liverpool keeper out of next week’s Merseyside derby.

6 — Jurgen Klopp dropped Alex Oxlade-Chamberlain into midfield in the absence of the injured Fabinho, and he had a positive impact on the game, producing an energetic display and winning the free kick that allowed Alexander-Arnold to craft the opener.

GK Alisson, 5 – Competently beat away a decent Davy Propper strike with both hands, but will have been relieved to see his clean sheet still in-tact moments later after Dunk’s shinned strike had the Brazilian scrambling. Shown a straight red in the 76th minute after a moment of madness which led to the Brighton goal.

DF Trent Alexander-Arnold, 8 – A brilliant attacking display. The young full-back produced some inch-perfect set-piece deliveries and grabbed his fourth and fifth assists of the season as a result, with the excellent Van Dijk twice the delighted recipient.

DF Dejan Lovren, 7 – Used his experience to get his body in the way of the troublesome Aaron Connolly and win a free kick for his side as the Irishman looked to make a nuisance of himself. Slightly fortunate to see Dunk’s glancing header drop wide of the post, but it was a decent display from the Croatian.

DF Virgil van Dijk, 9 – The big Dutchman was a rock at the back again and sprayed the ball around like Kevin De Bruyne. He grabbed his second goal of the season with a placed, looping header into the far corner and helped himself to another with a bullet-header from another Alexander-Arnold delivery in an immense display.

DF Andrew Robertson, 6 – Fired over from a tricky half-volley on the edge of the box as Liverpool started brightly. Found his attacking freedom limited in the first half as the Seagulls fought their way back into the game, but provided more attacking support after the break with some dangerous crosses into the box.

MF Jordan Henderson, 6 – It seemed like the Liverpool skipper had one of his quieter afternoons, but that may be a little harsh on the midfielder who gets through so much work off the ball. Ran his socks off for the cause when his side were really up against it late on.

MF Georginio Wijnaldum, 6 – Bravely threw his body in the way of Propper’s dangerous strike away to deflect the ball away just before the break. Looked to turn the screws with a surging run at the other end, but the Netherlands midfielder slightly overhit his pass as he looked to slip in Robertson.

MF Alex Oxlade-Chamberlain, 8 – Saw his early shot blocked blocked following a darting run into the penalty area. Continued to stretch the visitors’ defence and drew the foul that led to the opening goal. Stung the palms of Mathew Ryan following some remarkable work by Sadio Mane down the left.

FW Mohamed Salah, 6 – Involved in some nice link-up play with Roberto Firmino in the first half, but could only fire into the side-netting after taking a heavy touch. It was evident the Egyptian is still short of match-fitness, although he almost claimed an assist when he set up Oxlade-Chamberlain, who tested Ryan again with a powerful strike.

FW Roberto Firmino, 7 – A positive performance, but should have bagged himself a goal. The Brazil forward drew an excellent, instinctive save from the right-hand of Ryan with a venomous strike from the edge of the box. Was thwarted by the latter again, this time from close range after being picked out by Mane at the back post.

FW Sadio Mane, 8 – Showed unbelievable balance and energy to drive forward down the left and find Firmino, despite receiving a clip to the ankles. Should have got on the scoresheet when Oxlade-Chamberlain’s deflected strike fell perfectly at the feet of the unmarked Senegal man, but Ryan saved superbly.

MF Adam Lallana, 6 — Replaced Salah in the 69th minute.The midfielder found it tough to secure a foothold in the game. Showed nerves of steel to calmly nod back to his goalkeeper under huge pressure.

GK Adrian, NR — Replaced Oxlade-Chamberlain in the 78th minute as a result of Alisson’s dismissal for a bizarre handball. Left reeling after Dunk converted the resulting free kick while the Spaniard was still organising his wall.

FW Divock Origi, NR — Replaced Firmino in the 76th minute as the Reds looked to put the icing on the cake, but he struggled to have an impact as Brighton ended the game strongly.