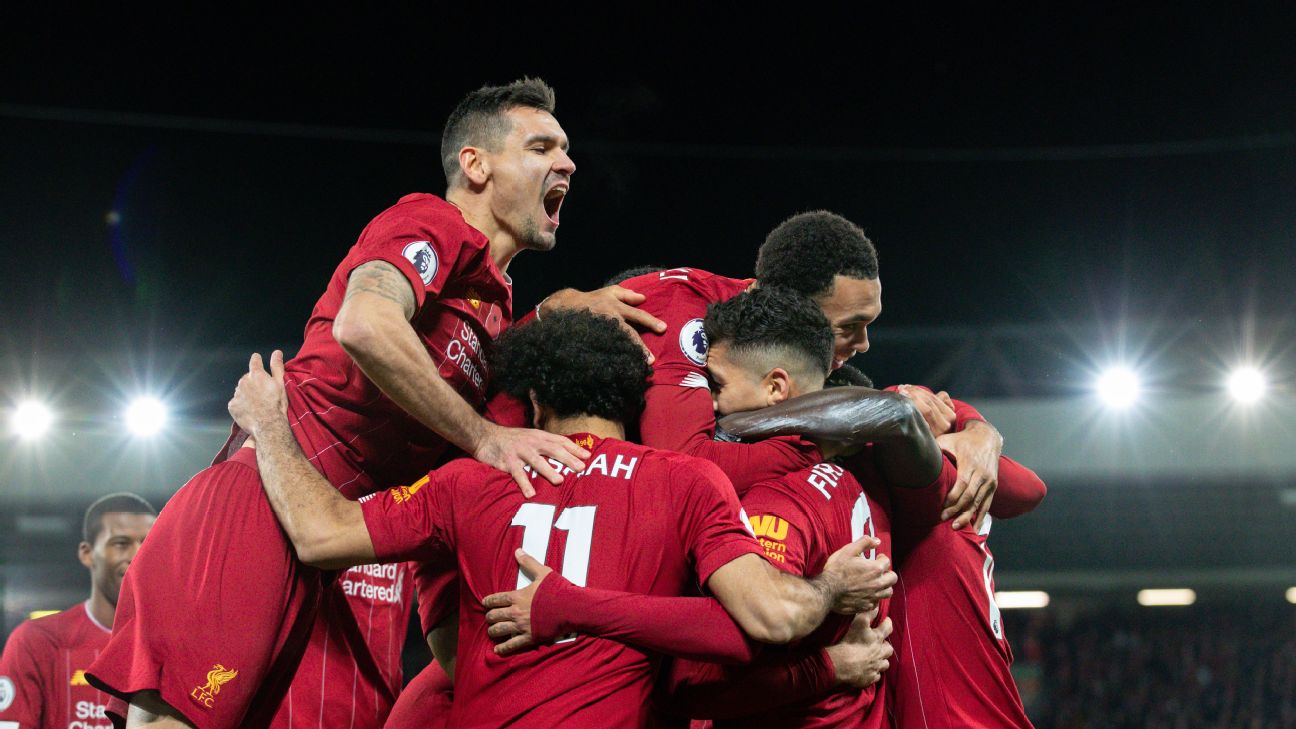 LIVERPOOL, England — Pep Guardiola concluded his long praise of Liverpool following Manchester City’s 3-1 defeat at Anfield by tagging them as “the best team, right now, in the world.” Meanwhile, City midfielder Bernardo Silva, wrestled with the reality that “you can play better than them and still be 2-0, 3-0 behind” in the aftermath of the loss, which left the defending champions fourth and nine points adrift of Jurgen Klopp’s league leaders.

The most accurate appraisal of this Liverpool group came from a man who used to thrive on being the ultimate Anfield bandit, Jose Mourinho. He stole a handful of wins there as a manager and also spent much of his career locked in an exacting battle with Pep Guardiola. In his role as Sky Sports pundit extraordinaire, Mourinho described Klopp’s men as “the complete puzzle” and those words help explain just how Liverpool got the better of Man City on Sunday.

Liverpool won the midfield battle — Fabinho, Georginio Wijnaldum and Jordan Henderson served as destroyers, creators and in the case of the Brazilian, a goalscorer. The trio were physical, disciplined, press-resistant and accomplished in and out of possession. While City were brilliant on the ball, they were a distinct second best without it.

Then there were Liverpool’s full-backs, who continue to show why they are the standouts in their positions this season. Trent Alexander-Arnold’s diagonal pass to Andy Robertson, delivered with precision and the air of a pedigreed midfielder with his weaker left foot, saw the left-back then supply a teasing cross to the far post for Mohamed Salah to head in the second goal.

“I don’t think I ever saw a goal like this. Probably not,” Klopp said postmatch. “A right full-back with a 60-yard pass to the left full-back; two more touches and a cross over 40 yards, 50, and a header. That’s pretty special. It was a good moment to score a goal like this.” The pair played two key passes each on Sunday, with Alexander-Arnold having the most touches and making the most passes for Liverpool. Between them, they had three interceptions, five clearances, two tackles and seven possession gains.

In an exclusive with ESPN in May, Alexander-Arnold revealed how important his role has become. “Just as Ashley Cole did when I was growing up, I want to change the way full-backs are thought of along with Robbo,” he said. “We want to show that full-backs often influence a game a lot more than positions that are traditionally thought of as the most prestigious. It’s a valuable role as Klopp and Guardiola have both said and it’s certainly one of the most demanding.” The pair achieved that on Sunday and Alexander-Arnold dealt with Raheem Sterling, City’s best player at Anfield, superbly.

In fact, the Reds’ defence in general was excellent bar leaving Bernardo Silva unmarked to pull a goal back for the visitors, even though that 78th minute effort was their first shot on target in the second half. Meanwhile Klopp’s forwards — Sadio Mane, Mo Salah and Roberto Firmino — defended from the front, contributing six tackles, eight possession gains and one clearance between them.

When Guardiola was asked why Liverpool are so hard to play against, he referenced all of the above. “They are incredibly strong in the set-pieces,” he said. “When you sit back and defend in the box, they open you up with Alexander-Arnold and Robertson and start to make crosses.

“When they arrive with not just Mane, Salah, Firmino, but Henderson coming with the right tempo, Wijnaldum and the second balls, it’s almost impossible to live with that situation. When you are able to get back from that position, they have an incredible back four. And when you are attacking, like we tried, every mistake you can do — the transitions are the biggest quality of Jurgen from all of his career — like the situation with the second goal.”

There was another facet to Liverpool’s game that will have impressed Mourinho in particular. The Reds were shrewd, slowing the game down to prevent City from taking quick throw-ins or free kicks, which quite clearly frustrated them. They also reacted to big moments better: when the ball struck Alexander-Arnold’s arm five minutes into the game, Sergio Aguero stopped playing in order to appeal for a penalty to Michael Oliver, with Kevin De Bruyne and Bernardo Silva following suit. The ball was still there to be won, with Sterling free on the far side and screaming for it to be fed to him. Instead, Liverpool shuffled it quickly to Mane and within 22 seconds, Fabinho had fired a thunderous shot in from distance to give them the lead.

For all the understandable frustrations about VAR — the PGMOL’s explanation of the handball, discounting the fact it deflected off Silva’s arm first which is a factor in the new law, was unhelpful — City ultimately lost because they were deficient in both boxes. Liverpool managed the encounter better, starting with arguably the game’s turning point, when City stopped to appeal instead of playing to the whistle.