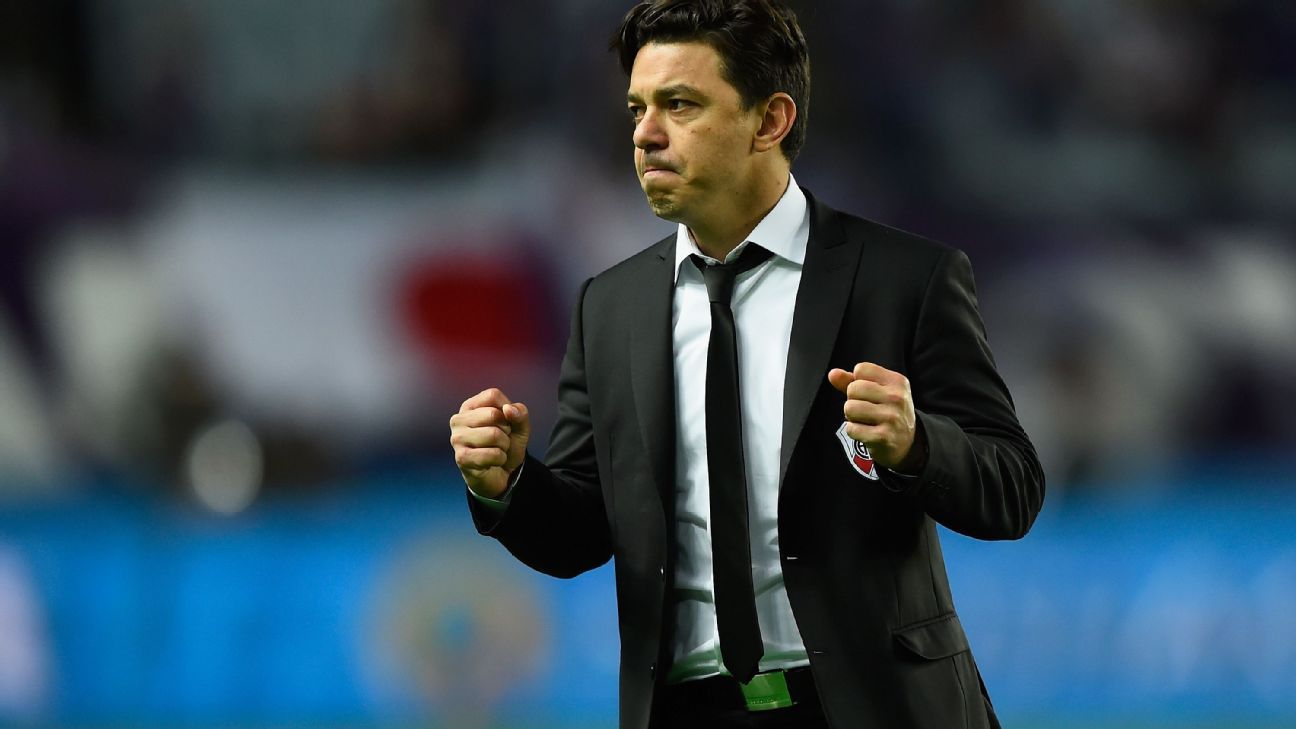 Pep Guardiola is a big fan of River Plate coach Marcelo Gallardo and it’s looking increasingly likely the Manchester City coach will be able to see his work more closely in the coming year.

“What Gallardo has done with River is incredible,” Guardiola told an Argentine TV station. “Some things are inexplicable. Every year three coaches are named as the best in the world, and he’s never among them. I can’t understand it. It’s as if there’s nothing else in the world apart from Europe.”

– FIFA Club World Cup: All you need to know

Before long, though, Gallardo will probably have crossed the Atlantic. After over five years in charge of River Plate, he is surely running out of road. He has won the Copa Libertadores twice, and his team appear well set for another final appearance after their 2-0 win over historic rivals Boca Juniors in the first leg of this year’s semifinal.

How much more can he possibly achieve in his current position? So far, it seems, he has not been tempted by the Argentina national team — and recent speculation is linking him to Barcelona, as a possible successor to Ernesto Valverde. It is certainly possible to imagine Gallardo receiving the blessing of Lionel Messi. With a combination of youth, experience, a commitment to attacking football and an impressive CV as a player, Gallardo ticks most of the boxes.

He was a top-class attacking midfielder in his playing days, subtle and skillful, with over 40 caps and two World Cups to his credit. His playing career is mostly associated with River Plate, but he had some good times in France (more with Monaco, less with PSG) and spells in the United States and Uruguay, where he ended his playing days and promptly started coaching with Nacional, taking them to the league title.

But it is his time with River that has put him on the map. He is now well into his sixth year in charge — a rare enough feat in European football, and all but unthinkable in South America, where demands change so quickly. It is very difficult to maintain consistency in an environment where the best players are continually being sold. But as Guardiola pointed out, at River Plate “every year the players leave, but the work continues.”

Coping with this has given Gallardo a depth of experience beyond his 43 years and certainly beyond the baby-faced appearance that has left him dubbed “The Doll.”

The most impressive part of his work is how he has grown over the course of his reign at River. Initially, it appeared that he was happiest playing a 4-4-2 formation, featuring the old-fashioned Argentine diamond — a holder in front of the centre-backs, two mixed midfielders either side and the traditional No. 10, the type of player Gallardo had been to direct operations. Over time, though, he has become proficient at reading the opposition, studying his own resources and tweaking the tactical plan, always, it would, seem, without over complicating and confusing his players.

On occasions — the first leg of last year’s Libertadores final against Boca the most notable, but there have been others — he has caused a surprise by going with a back three. Ten days ago against Boca, he had obviously prepared his team to use width to get around and outside a tight defensive line. It will be fascinating indeed to see what he comes up with later this month for the second leg. At home, in their intimidating stadium, Boca are obliged to chase the game. Gallardo is unlikely to think only of defence. An away goal could clinch things in his side’s favour, and the coach will doubtless be thinking of how to get it.

A one-off decider against either of the Brazilian semifinalists, Flamengo or Gremio, would be a test. River rode their luck to get past Gremio in last year’s semifinal, and under Portuguese coach Jorge Jesus, Flamengo have become a hugely attractive and efficient attacking threat.

Get past that and there is another crack at the FIFA Club World Cup — the one place where Gallardo has been found wanting. In 2015, his side did little of note in a 1-0 semifinal win over Sanfrecce Hiroshima of Japan, and then caved in timidly to a 3-0 defeat in the final against Barcelona. And last year River did not even make the final, falling on penalties to Al Ain of the Arab Emirates.

It is surely Gallardo’s failure in these competitions that has stopped him getting on the podium in the world coach of the year awards. He has not yet shown that he can do it outside South America, but he may not have much longer to wait.