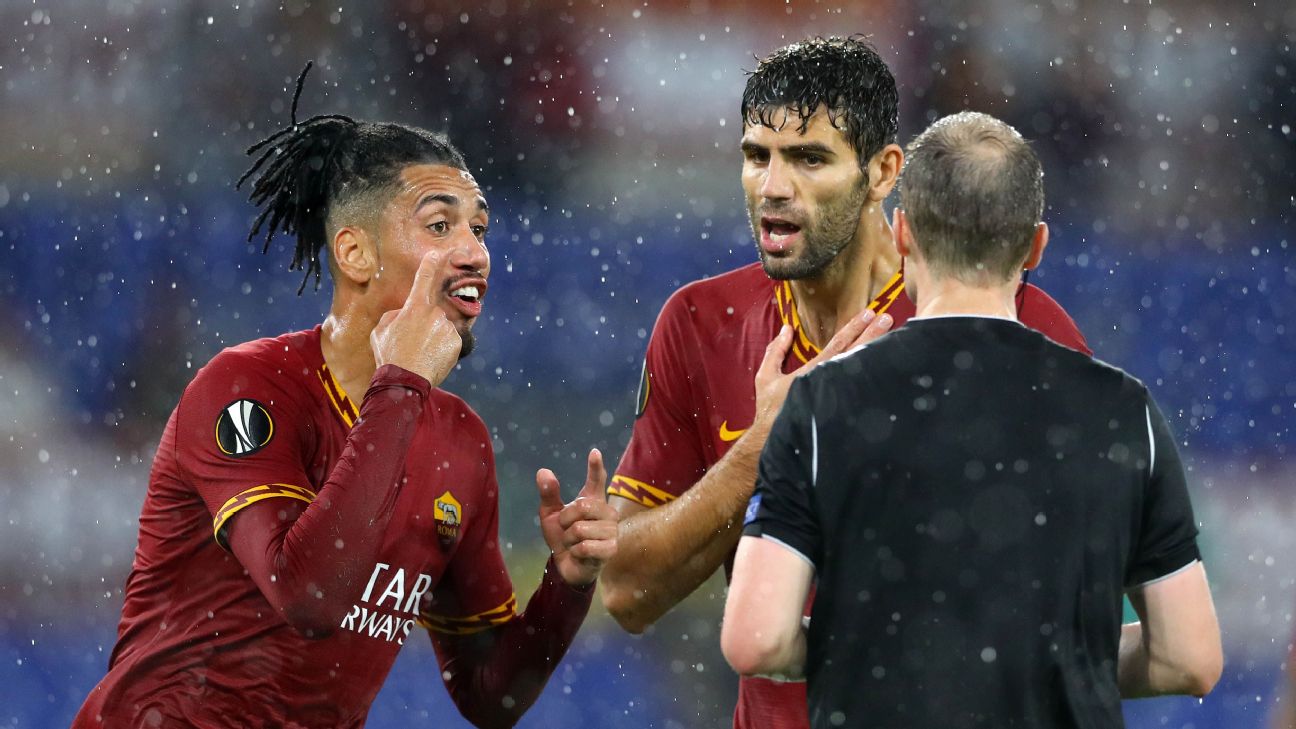 As they say in Italy, it always rains on the wet. Right now, Roma and Milan, who play Sunday (1:00 PM ET on ESPN+), are down on their luck, caught in a downpour. And just when the weather looks about to turn, a ray of sunshine breaking through a crack in the clouds, the thunder rolls and another storm blows in. When will it end?

Roma were seconds away from beating the Bundesliga leaders Borussia Monchengladbach on Thursday in the Europa League only for referee Willie Collum to award a nonexistent penalty against Chris Smalling. A deserved victory in adversity suddenly metamorphosed into a controversial draw. Smalling tweeted his “disbelief” and Gladbach’s sense of humour hardly eased the pain.

“The players are devastated,” Roma manager Paulo Fonseca said, opening a door to a disconsolate and angry dressing room. While the club appreciated the honesty of the match officials who fronted up to their game-changing mistake afterwards it came as scant consolation.

Sunday’s opponents Milan know better than most what Roma are going through at the moment. They too are getting over conceding a stoppage-time equaliser to Lecce last weekend although, in that case, they only had themselves to blame. A night that looked like being a happy birthday for new coach Stefano Pioli ended without celebration.

Andrea Conti gave a penalty away (already the fourth Milan has conceded this season) and allowed the Salentini back into the game. Milan overcame that setback, reclaiming the lead only to let it slip through their hands once more. Lucas Biglia and Ante Rebic both had opportunities to clear the ball. Suso didn’t sense the danger and Lecce full-back Marco Calderoni, who once scored a goal that kept Pioli’s Piacenza up, caused the mood to plunge at San Siro with a 30-yard screamer that crept inside Gianluigi Donnarumma‘s far post.

Returning to the Champions League is essential for Roma and Milan. At present, Cagliari are closer to the top four. “We’re a bit behind,” Roma’s technical director Morgan De Sanctis said before the Gladbach game, echoing the sentiments of his opposite numbers, Paolo Maldini and Zvonimir Boban at Milan.

While that may be true, there has still been less talk of a crisis in the capital than under the glinting glare of the Madonnina. That’s because Roma have lost only one game in all competitions under Fonseca. The team has, at times, played scintillating attacking football and the Portuguese continues to give the impression that if something isn’t working, he is able to adapt and come up with interesting solutions. The same could not be said, for instance, of the recently sacked Marco Giampaolo at Milan.

The rest is misfortune and injustice. For instance, Roma firmly believe Nikola Kalinic‘s goal should have stood in the 1-1 draw with Cagliari. If it had they would have been level on points with fourth-placed Napoli. Where a crisis can definitely be declared is in the 16 injuries Roma have suffered. Currently Jordan Veretout is the only natural midfielder still standing. Centre-back Gianluca Mancini had to play next to him against Gladbach, which is why sporting director Gianluca Petrachi is scouring free agency for cover. The agent of former Verona and Udinese midfielder Emil Halfredsson, 35, was at the Gladbach game and, quite incredibly, Jack Rodwell and Marcel Buchel underwent trials and medicals at Trigoria on Thursday.

As if the loss of the on-fire Lorenzo Pellegrini to a broken wasn’t hard enough to take, Bryan Cristante, now faces months out after tearing a tendon in his adductor. Kalinic won’t play again in 2019 either after breaking his fibula, forcing Edin Dzeko to rush back and play the second half against Samp last weekend only days after undergoing surgery on his cheekbone. Fonseca must be at his wit’s end. “Last year at Shakhtar we had four injuries all season,” he said. “I want to believe it’s just bad luck.”

Roma’s casualty list wasn’t much better under his predecessors though and fingers have been pointed at the pitches at the training ground which have been re-laid in an effort to solve the problem. As Fonseca says, it’s “impossible” to develop the team and improve when the personnel and system he settled on are constantly disrupted.

Pioli has more cards to play with on Sunday. While the result against Lecce fell in line with the disappointing start Milan have made to the season, the performance by contrast was a source of optimism.

Released from the ill-fitting straitjacket Giampaolo strapped them up in, there was an agility and fluidity about Milan that hasn’t been seen in a long, long time. They had six shots in the first 15 minutes and 12 in the first half; a notable departure from the Giampaolo days when the team tended to go 45 minutes or even a game without one on target.

Milan scored as many goals from open play (two) as in their previous seven outings and were a fun watch until they capitulated. Left-back Theo Hernandez bombed forward and had 102 touches. Hakan Calhanoglu and Lucas Paqueta played between the lines with the Turk putting in his best display in a Milan shirt (six shots, five chances created, a goal and an assist). Rafael Leao continued to cause problems for opponents, his pace allowing him to burst through the smallest of gaps. Even Krzysztof Piatek came on and managed to score his first goal from open play since May.

Positives were in no short supply. Donnarumma saved another penalty only for Khouma Babacar to sweep in the rebound. The question is: can Milan back it up against more formidable opposition? Giampaolo thought he’d turned a corner even in defeat after a good hour against Torino only to see his side blow up at home to Fiorentina in spectacular fashion. Pioli also has a decision to make about Suso, with the Spaniard increasingly replaced him as the trending topic on Milan twitter. Once considered the team’s best player, he has flattered to deceive for too long and patience is wearing thin. Rebic or Giacomo Bonaventura represent alternative options for Pioli on the right-hand side although both prefer to cut inside from the opposite flank.

Milan fly south three points behind Roma but nowhere near as banged up. Pioli has had all week to prepare his players for Sunday. An opportunity to regain ground on a rival for fourth is clear and obvious.

Roma are walking wounded and yet they fight on. Nicolo Zaniolo responded to criticism from Fabio Capello with a fine goal on Thursday night. Capello had cast aspersions on his attitude by saying he hopes Inter’s 17-year-old Champions League debutante Sebastiano Esposito “doesn’t go down the same path” as Zaniolo; a path that led him to win the Serie A Young Player of the Year… Meanwhile, Mancini and particularly Smalling have exceeded expectation since partnering up at the back.

All that said, neither team is where they want to be ahead of Sunday’s clash at the Stadio Olimpico. The rain continues to lash down on Roma and Milan. Who makes like Gene Kelly and finds a way to sing through it will be the one to see the sunshine first.