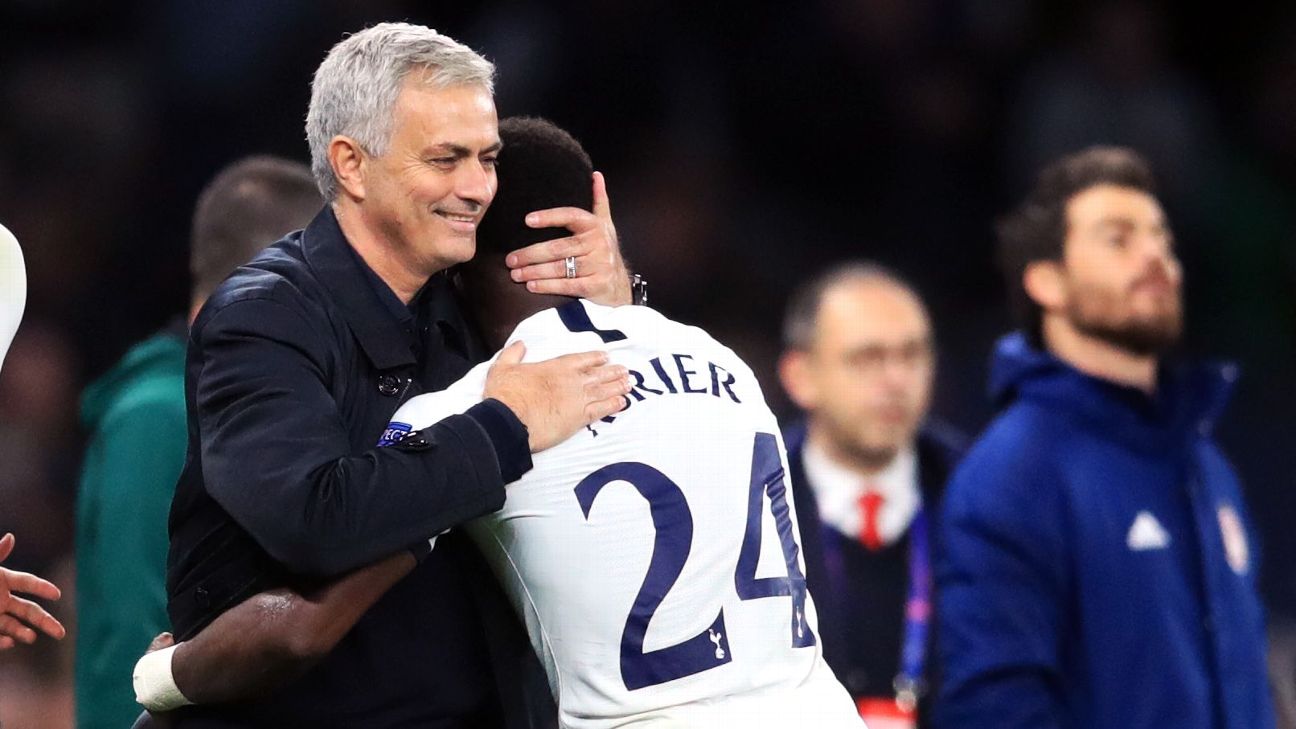 Riyad Mahrez and Serge Aurier are both coming towards the end of difficult years — for different reasons — but as we head towards the twilight of 2019, both served reminders of their enduring qualities during big wins this past weekend.

It was poignant that Aurier, who was a surprise inclusion in CAF’s 2018 African Team of the Year, enjoyed such a return to form on the same weekend that he was overlooked for the 30-man shortlist for the 2019 African Player of the Year award.

Jose Mourinho’s recent arrival at Tottenham Hotspur, as a replacement for Mauricio Pochettino, has prompted considerable discussion on which players will come into the club, and who will be deemed surplus to requirements.

Aurier, largely forgotten in the furore around the Portuguese coach’s arrival, and seemingly at a crossroads in his career, represents a tantalising prospect for Mourinho.

He’s struggled to impress in London since moving from Paris Saint-Germain in a £23 million deal in August 2017, finding himself in and out of the Spurs starting XI — even since the departure of Kieran Trippier — and often undermining his performances with poor decision-making, theatrics, or rash challenges.

Former Tottenham midfielder Jermaine Jenas described the former Toulouse man as a ‘liability’ and a ‘manager’s nightmare’ while speaking to BT Sport after the Londoners’ Champions League defeat by Bayern Munich, and his mentality — both on and off the pitch — has regularly been questioned.

Injury has also affected Aurier’s progress, and it’s easy to anticipate Mourinho finding the Ivorian’s baggage too excessive to justify his talent.

However, the 26-year-old’s quality — going forward at least — remains undiminished, and Aurier demonstrated his enduring class with a superb display as West Ham United were defeated 3-2 in Mourinho’s opener.

This was one of the wideman’s finest Spurs performances, keeping the Hammers at bay with a series of strong tackles during the first 45 minutes, before a magnificent cross picked out Harry Kane for Spurs’ third in the 49th minute. He was also the game’s most prolific dribbler, executing five successful dribbles across the contest.

Of course, some of Aurier’s defensive deficiencies were evident — with his positional sense occasionally exposed by the hosts — but his athleticism, tenacity and dynamism with the ball at his feet suggest that a renaissance could be on the horizon under the Special One.

Remarkably, only Aaron Cresswell had more touches during Saturday’s game than Aurier (85), which demonstrates the influence Mourinho afforded him, and the consistency with which the visitors’ play flowed down his right channel.

Mahrez, like Aurier, is coming to the end of a tricky year, even if he’s won considerably more silverware than the West African.

However, amidst the honours haul, there’s a sense that Manchester City have rarely seen the best of the wideman, who’s been given relatively little opportunity to justify the record price tag that took him to the Etihad Stadium.

After making 14 starts in the league last term, Mahrez had started just five league matches this season before stepping into Pep Guardiola’s team as a replacement for the suspended Bernardo Silva for the visit of Chelsea on Saturday.

With Liverpool winning earlier in the day, it was imperative that the Sky Blues took all three points, and they duly secured a 2-1 victory, with the Algeria international netting a delicious 37th-minute winner after he slalomed past two defenders and then curled the ball beyond Kepa.

“I was 50-50,” Mahrez told City’s official website on Tuesday, assessing his own performance against Chelsea. “[For the] first 20 minutes, I lost one or two balls I don’t usually lose, but slowly I came back into the game, scored the goal and I played good in the second half.”

While the Algerian — an Africa Cup of Nations winner earlier this year — has been included in CAF’s 30-man shortlist for the APOTY award, he’s unlikely to clinch the prize itself. However, Saturday’s showing against the in-form Blues was a reminder of his exquisite qualities, which could yet make him one of Guardiola’s star men.

Elsewhere in the Premier League, Lys Mousset continued his fine run of form with a strike in Sheffield United’s 3-3 draw with Manchester United, while Sadio Mane and Wilfried Zaha both found the net as league leaders Liverpool defeated Crystal Palace 2-1 away.

German-Congolese attacker Streli Mamba was the star African performer in the Bundesliga this weekend, netting a brace as Paderborn held Borussia Dortmund 3-3 away from home.

The double was a Bundesliga first for the 25-year-old, who was born in the same town as Germany great Jurgen Klinsmann, with the attacker delighting the visiting supporters with his trademark ‘mamba’ celebration after each strike.

Cameroon midfielder Pierre Kunde had never scored in the Bundesliga this weekend, but also struck twice during a thoroughly excellent showing for 10-man Mainz as they thumped Hoffenheim 5-1 away to move out of the bottom three.

Nigeria striker Anthony Ujah opened the scoring for Union Berlin as they secured a shock 2-0 victory over table-topping Borussia Monchengladbach, Amine Harit extended his fine start to the season with the opener as Schalke 04 defeated Werder Bremen 2-1, and Moussa Diaby equalised for Bayer Leverkusen as they drew 1-1 at home with Freiburg.

By contrast, Democratic Republic of Congo centre-back Marcel Tisserand endured a weekend to forget, although his 45th-minute dismissal didn’t prevent Wolfsburg from downing Eintracht Frankfurt 2-0 away.

In Spain, both Samuel Chukwueze and Youssef En-Nesyri were among the goals, although neither the Villarreal wonderkid nor the Leganes striker were able to prevent defeat against Celta Vigo or Barcelona respectively.

The Yellow Submarine’s loss against Celta leaves them in 12th, without a victory in four, although Chukwueze continued his momentum from the international break — when he scored in Nigeria’s 4-2 victory over Lesotho — to end his six-game goalless run in La Liga.

En-Nesyri’s delicious curled effort against Barca means he’s now scored in three consecutive top-flight matches for the second time in his career, although Leganes remain rooted to the foot of the table, eight points from safety.

In Italy, Atalanta’s Musa Barrow delivered an encouraging display against reigning champions Juventus – contributing an assist and hitting the woodwork in a 3-1 defeat which leaves the Old Lady one point clear at the top of the table.

The Gambian attacker was making his first league start of the season with Duvan Zapata, Josip Ilicic and Luis Muriel all injured or unfit, although he failed to add to his tally of one Serie A goal since netting three in four in the spring of 2018.

Ligue 1’s African stars were again among the division’s top performers this weekend, with Ludovic Ajorque, Mounir Chouiar and Kalifa Coulibaly among the goals.

However, it wasn’t a blemish-free weekend, with Aurelien Chedjou and Steven Moreira among six players sent off during an ill-tempered weekend.

AS Monaco’s Islam Slimani experienced the full gamut of emotions; opening the scoring for Les Monegasques against Bordeaux, but then seeing red with 23 minutes on the clock. Nicolas de Preville struck the winner after Pablo had earlier cancelled out the Algerian’s opener.