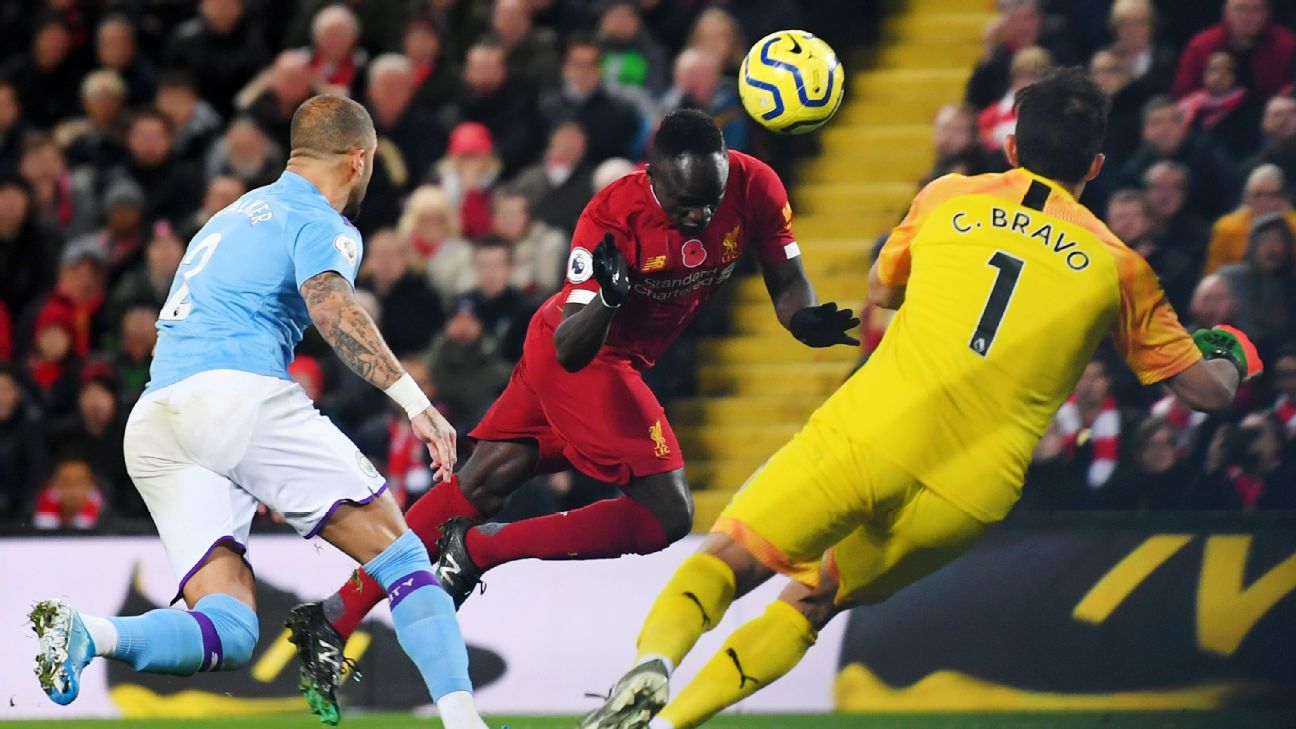 Lebo Mothiba ended his five-and-a-half-month wait for a goal by scoring twice in Strasbourg’s Ligue 1 victory over Nimes last weekend, while both Mohamed Salah and Sadio Mane starred as Liverpool defeated Manchester City in a potentially decisive clash at the top of the English Premier League.

South Africa’s Mothiba hadn’t scored since May when he took to the field at La Meinau on Saturday, enduring a goalless stint with South Africa at the Africa Cup of Nations before a sluggish start to the season in which his fitness has been queried.

The attacker reminded Racing fans of his quality, however, netting twice as the strugglers dispatched Nimes 4-1.

The hitman’s return to form could be coming at the ideal time for Bafana Bafana ahead of this week’s Afcon qualifiers against Ghana and Sudan, while his performance also showcased the qualities with which he can hurt opposition defenders.

Mothiba posted his first goal — a fine right-footed volley — to give the hosts a 2-0 lead at the end of the first half, before adding a left-footed tap-in to round off the scoring in the 85th minute.

“This is what we’ve been hoping for for a little while,” Strasbourg coach Thierry Laurey said in his post-match press conference.

“We knew, unfortunately, that his [Mothiba’s] participation in the Nations Cup would compromise his start to the season, because when he returned we were already in the midst of competition and it was difficult for him to reach the right level physically.

“He struggled a bit at the start of the season, and now he’s beginning to rediscover his freshness, even though he’s had a few little injury problems which have affected him these last few weeks.

“However, we’ve succeeded in managing them, and this evening, that allowed him to score twice, which are truly the goals of an attacker.”

Elsewhere in France, few African stars have been in better form this term than Nigeria’s Victor Osimhen, at least at home, where he’d demonstrated a relentless goalscoring streak for LOSC Lille heading towards the end of October.

The Nigeria international has struggled away from home — not scoring in any of Lille’s six away games in Ligue 1 — although he’d posted seven in six home matches heading into last weekend’s showdown against Metz, with his failure to net in the 3-0 victory at home against Bordeaux his only blemish at the Stade Pierre Mauroy in Ligue 1 games.

Osimhen again drew a blank on Saturday, however, as the Dogues, who are beginning to lose momentum, were held 0-0, with Zambia defender and Africa Cup of Nations 2012 winner Stoppila Sunzu marshalling the youngster effectively.

Excluding his consolation goal for Lille in their midweek 4-1 defeat by Valencia in the UEFA Champions League — the only goal the Nigerian has scored away from home this season — Osimhen has now failed to score in six of his past seven matches for club and country, and his sensational early season form has deserted him.

The 20-year-old deserves immense credit for adapting seamlessly to the French top flight after moving from VfL Wolfsburg, netting nine times in 12 games for Lille and Nigeria, and duly winning the Ligue 1 Player of the Month award for September.

He must now wait to return to goalscoring ways in Ligue 1, having been suspended for the clash with Idrissa Gueye‘s Paris Saint-Germain on Nov. 22, and  will likely be eyeing the Super Eagles’ Africa Cup of Nations qualifiers against Benin and Lesotho as an ideal opportunity to get back among the goals.

While Osimhen failed to score last weekend, Denis Bouanga continued his fine form for Saint-Etienne with a double to help them come from behind — twice — in a 3-2 victory at Nantes.

The Gabon wideman now has four goals and two assists in his past six matches in all competitions, having struck up a fine partnership with Algeria international Ryad Boudebouz.

In the English Premier League, Salah and Mane have had no trouble getting among the goals this term, and Liverpool’s star performers were again at the forefront of another magnificent Reds performance as they dispatched Manchester City 3-1 to move eight points clear in the EPL title race.

The Merseysiders have arguably never been better placed to end their 30-decade wait for a domestic crown, and both Salah and Mane — who took their league goal tallies for the season to six and seven respectively — were influential yet again.

Mane continues to demonstrate why he’s a player for the big occasion with a decisive contribution for Liverpool’s opener — scored by Fabinho after six minutes following a handball incident in the hosts’ penalty box 22 seconds earlier.

The Senegal international’s cross wasn’t cleared efficiently by Ilkay Gundogan, with Fabinho pouncing on the ball, advancing momentarily, before sending a delicious opener past Claudio Bravo.

Certainly, City will be sick of the sight of the Egyptian, who has now scored three in four home appearances against them since joining Liverpool. After Sunday’s showing, he’s now been directly involved in 69 goals in 60 Anfield outings for Jurgen Klopp’s team.

Mane, around whose tendencies to go to ground much of the pre-match ‘discussion’ between the two coaches had focused, took Liverpool to the brink of all three points in the 51st minute with a powerful header beyond Bravo after meeting another excellent cross, this time from Jordan Henderson.

The Senegal forward’s own impact at Anfield, while not as profound as Salah’s, remains staggering. His goal for Liverpool on Sunday was his 22nd at Anfield since August 2018, more than any other player has managed at a single venue during that time, according to Opta.

Salah and Mane will again be in contention for the highest individual awards in the sport when this year, and this season, are reviewed, and performances such as these ought to convince voters that they deserve to be considered right at the pinnacle of talent in the game today.

Also in the Premier League, Egypt’s Trezeguet made it two goals in two matches with a 92nd-minute effort at Wolverhampton Wanderers, but it was too little, too late as Aston Villa fell to a 2-1 derby defeat.

In Italy, Ismael Bennacer was one of AC Milan’s better performers as they were beaten 1-0 by leaders Juventus, who moved to 32 points after 12 matches.

Injured Kwadwo Asamoah missed Internazionale’s 2-1 come-from-behind victory over Hellas Verona that saw them remain one point behind the leaders.

In pain, Asamoah’s Ghana teammate Thomas Partey signed off for the international break with a commanding performance — and a booking — as Atletico Madrid beat Espanyol 3-1 to move third in La Liga, one point off Barcelona after the Catalan said had defeated Joseph Aidoo‘s Celta Vigo 4-1 at the Nou Camp.

Ivorian Lago Junior maintained his goalscoring run with the opener in Mallorca’s 3-1 victory over Samuel Chukwueze‘s Villarreal, while Real Madrid crushed Pape Diop‘s Eibar 4-0 away to keep pace with the leaders at the summit of the Spanish top flight.

Finally, to the Bundesliga, where Achraf Hakimi‘s excellent run of form was halted in its tracks as Borussia Dortmund were thumped 4-0 at Bayern Munich.

Having showcased his attacking qualities so emphatically in midweek, when he scored his third and fourth goals of the UEFA Champions League campaign against Inter, Hakimi was exposed by left winger Kinglsey Coman, who was one of the hosts’ star performers.

While Hakimi saw a lot of the ball — no Dortmund player managed more touches than his 74 — he made just one tackle, failed to get forward as he typically does so effectively, and was also guilty of some sloppy touches.

The result leaves Dortmund six points behind league leaders Borussia Monchengladbach, having been leapfrogged by Bayern.

There were mixed fortunes for another North African, Algeria’s Ramy Bensebaini, as he scored and was sent off for a second yellow card as the league leaders defeated Werder Bremen 3-1 at home.