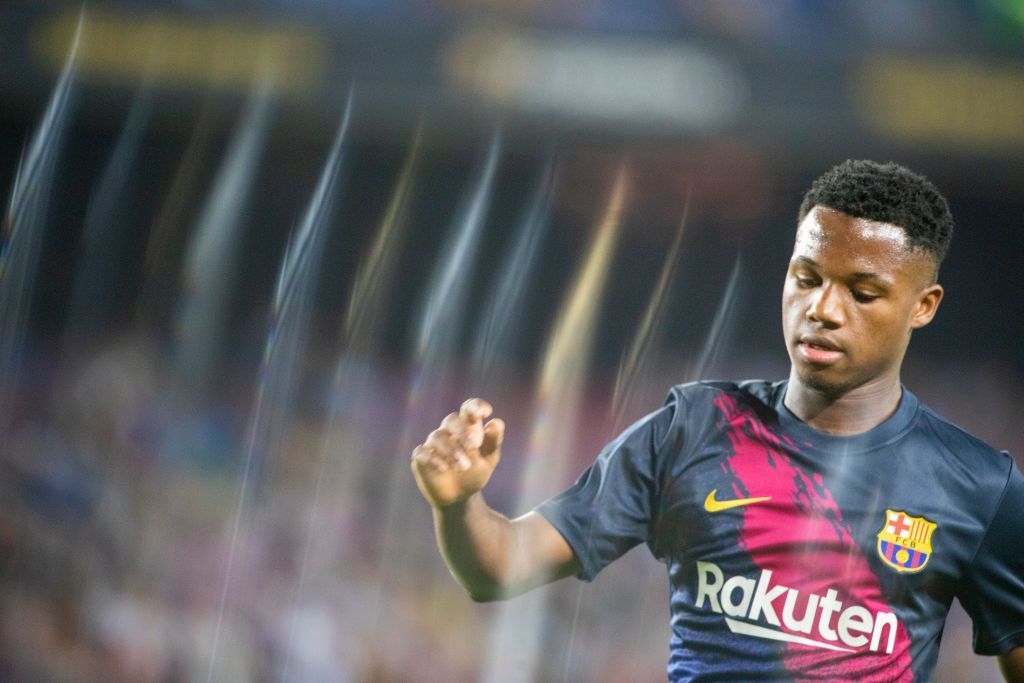 Barcelona wonderkid Ansu Fati is the name on everyone’s lips after the 16-year-old continued to write history in La Liga this weekend, following a start to the season that no one saw coming.

The Bissau-born youngster has already broken records this season after stepping into an unexpectedly prominent role at Barca.

He became the club’s second youngest debutant when he took to the field against Real Betis at 16 years, 298 days, and then became Barcelona’s youngest ever scorer when he came off the bench to net against Osasuna ahead of the international break, six days later.

Only two players younger than Fati had ever found the net in the Spanish top flight, and the teenager has appeared undaunted by the challenges set in front of him.

This weekend, only one minute and 51 seconds into his Nou Camp debut, against Valencia, he scored again. It may only have been 20 days since he first inserted himself into the season’s narrative, but already, a star has been born.

Minutes after his opener, a drilled effort after being picked out by Frenkie de Jong, Fati took off past Ezequiel Garay, leaving the Argentine defender for dead, and then played the ball in to the Netherlands international to make it 2-0 to the hosts as they marched towards a 5-2 victory.

Naturally, following his remarkable three-week introduction, Fati is already being heralded as the future of Barcelona, not to mention the future of Spain. After all, no player younger than the starlet has both scored and assisted in a La Liga game this century.

He’s enjoyed, although just whisper it, a better start to his Barcelona career than Lionel Messi, who needed 13 games to hit two goals for Barca – a tally Fati has managed in just three matches.

Having been born in Guinea-Bissau, the forward has the potential to become the next great superstar of the African game, although the Royal Spanish Football Federation have confirmed to ESPN FC that they are pursuing the necessary paperwork to recruit the attacker.

In the Premier League this weekend, Sadio Mane and Pierre-Emerick Aubameyang took their goal tallies for the season up to four and five respectively, after netting two goals each, even though their clubs endured mixed fortunes.

Arsenal again ended the weekend as the butt of the social media jokes, as Twitter’s cruel humour turned its ire towards another miserable defensive display in their 2-2 draw at Watford.

Aubameyang had fired the Gunners two goals to the good after 32 minutes with typical poise, spinning past a defender to fire beyond Ben Foster in the 21st minute, before adding a second shortly afterwards – a tap in – after being picked out by Ainsley Maitland-Niles.

However, Auba and £72 million man Nicolas Pepe – who endured a frustrating afternoon – could only watch on as failings in Arsenal’s midfield and defence allowed the hosts in to salvage a point later on.

At Anfield, in Saturday’s early kick-off, Liverpool ultimately made light work of Newcastle United despite falling behind to Jetro Willems’ seventh-minute opener after fine work by Christian Atsu. The scare didn’t last long.

Mane equalised 21 minutes later with an accurate finish into the top left corner, before giving Liverpool the advantage before half time, after a misjudgement from visiting goalkeeper Martin Dubravka.

Mohamed Salah took the contest beyond the Magpies with the Reds’ third in the 72nd minute, as Jurgen Klopp’s side extend their 100 percent record this season.

Elsewhere, Anglo-Nigerian duo Fikayo Tomori and Tammy Abraham were responsible for five of the goals in Chelsea’s 5-2 victory at Wolverhampton Wanderers, with the former opening the scoring with a delicious long-range effort before the latter — maintaining his recent excellent form — struck a 21-minute hat-trick to give the Blues a commanding lead.

There was still time for Abraham to score an own goal, but that could take none of the gloss away from a complete centre-forward performance.

Moussa Djenepo of Southampton and Tottenham Hotspur’s Serge Aurier were the other African standout performers of the weekend, the Mali wideman netting the only goal of the game as Saints won at Sheffield United, while the Cote d’Ivoire full-back contributed two assists in Spurs’ 4-0 rout of Crystal Palace.

In Serie A, Kwadwo Asamoah played 90 minutes for Internazionale in their 1-0 victory over Udinese, as Antonio Conte’s side maintain their perfect start to the league campaign.

Behind them, reigning champions Juventus dropped their first points of the season as they were held 0-0 at Fiorentina, for whom Asamoah’s former Ghana teammate Kevin-Prince Boateng came off the bench for a 21-minute cameo.

In Naples, Kalidou Koulibaly excelled for Napoli in their comfortable 2-0 triumph over Sampdoria, as the hosts bounced back from their defeat at Juve on August 31.

Over in France, Paris Saint-Germain finally downed Strasbourg in the 91st minute and had want away Neymar – enduring a negative reaction from the home supporters throughout – to thank for his late winner.

The Brazil superstar started in tandem with Eric Maxim Choupo-Moting, but the latter was withdrawn for new boy Mauro Icardi in the 63rd minute – potentially signalling the end of the Cameroon skipper’s brief prominence at the Parc des Princes.

One of Choupo-Moting’s compatriots, Adrien Tameze, scored Nice’s only goal in their 2-1 defeat at Montpellier, while another Indomitable Lion, Stephane Bahoken, was on the scoresheet in a losing effort for Angers at LOSC Lille.

This contest belonged to Nigeria wonderkid Victor Osimhen, who continued his magnificent start to the season with a 39th-minute opener.

The 20-year-old’s goal means he becomes the first player since Mario Balotelli in 2016 to score five or more goals in his first five outings in the French top flight.

On Sunday, Keita Balde netted a consolation goal in Monaco’s miserable 4-3 capitulation at home at the hands of Marseille, while Romain Hamouma scored twice in Saint-Etienne’s 2-2 come-from-behind draw against Toulouse.

The African interest in the Bundesliga this weekend centred in Paderborn, where Salif Sane scored one and Amine Harit netted twice as Schalke 04 thumped the hosts 5-1.

Sane equalised in the 33rd minute following Cauly Oliveira Souza’s opener, but Harit was the star of the second half, scoring in the 71st and 85th minutes to inflict a miserable defeat on Paderborn.

After a miserable 2018-19 season in which he regressed following a series of off-field problems, Harit needed just 14 minutes to double his entire goal haul for the last campaign.

Expect more exciting things to come from the Morocco starlet as he rediscovers his top form in Gelsenkirchen.