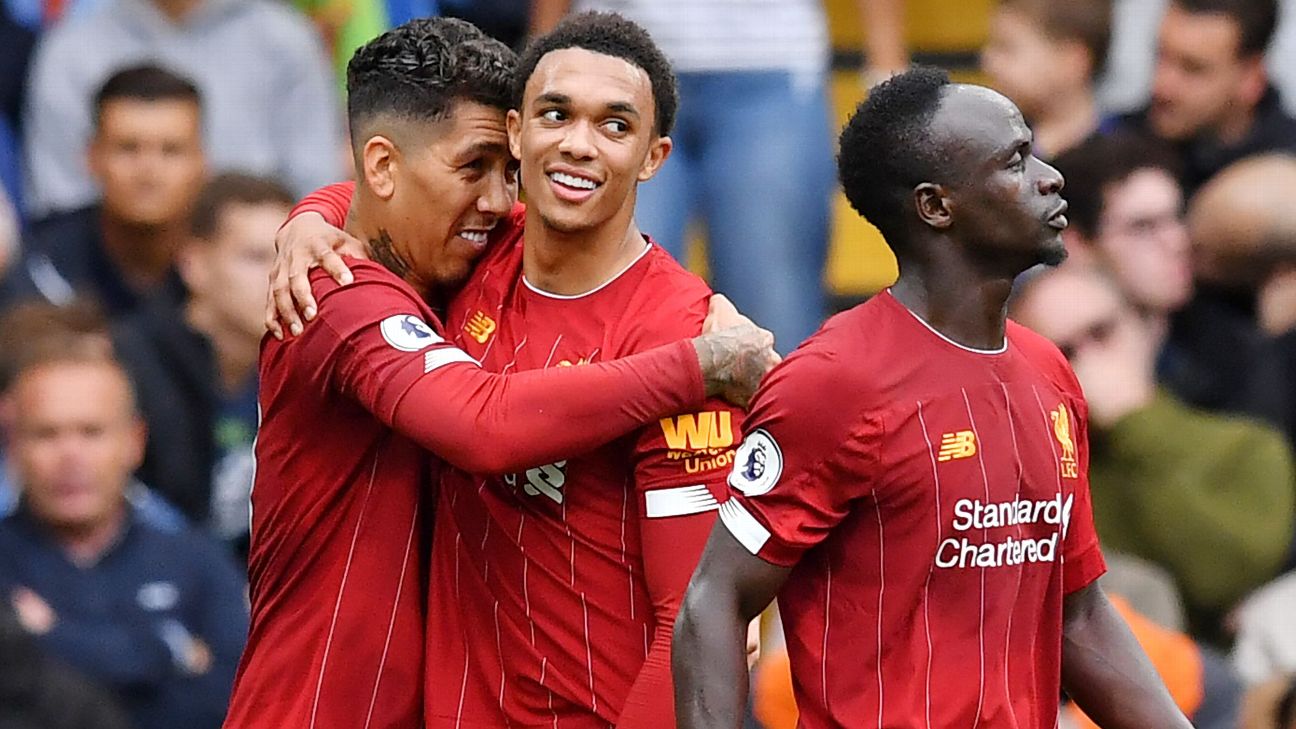 VAR controversy struck again as Liverpool went five points clear at the top of the Premier League with a 2-0 win over Chelsea at Stamford Bridge. Cesar Azpilicueta thought he’d levelled the scores after some penalty area pinball, but the goal was chalked off with Mason Mount‘s left foot adjudged to have been inches offside in the build-up play.

That came after Trent Alexander-Arnold had crashed home the game’s opening goal following a stunning free-kick, before Adrian produced a smart save with his legs to superbly deny Tammy Abraham from close range. And with the Blues still reeling, Roberto Firmino made it 2-0 with a powerful header from Andy Robertson‘s cross, before N’Golo Kante pulled one back in the second half with a superb finish of his own.

Liverpool’s attacking play was nothing short of superb in the first half and the visitors had two excellent goals to show for it. Firminho caused endless problems, while Alexander-Arnold and Andy Robertson again showcased their brilliance down the flanks.

Adrian will also take confidence from an inspired display between the sticks as he continues to deputise in Alisson’s absence. Most importantly, Liverpool moved five points clear at the top of the table with their first win at Stamford Bridge in three attempts.

For all their attacking quality, there were moments when Liverpool struggled to cope with the pace and directness of the Chelsea attack. Both Mount and Abraham looked to be particularly troublesome for the hosts, while Marcos Alonso‘s overlapping runs created a real dilemma for Alexander-Arnold.

The Reds always looked fragile at the back as Chelsea hurled the kitchen sink and everything in it at their opponents, and Kante was given far too much room to fire a fine effort into the top corner.

6 –  Despite the excellent form of Mount and Abraham, the Reds boss Jurgen Klopp opted for a positive approach and was rewarded for his optimism as his side earned a hard-fought win. With that said, that same mentality left his side a little exposed to a barrage of Chelsea attacks, but the German used his substitutions wisely as he looked to tighten things up at the back.

GK Adrian, 7 — Ice-cool to lift the calmest pass you’ll ever see over the head of Abraham before thwarting the latter moments later with an excellent save from close-range. Later denied Alonso with a stunning save but the Chelsea man had drifted offside anyway.

DF Trent Alexander-Arnold, 7 — Hammered an emphatic strike into the top corner after a delightful Mohammed Salah lay-off from a well-worked free-kick. Caused Chelsea endless problems down the right in another tireless performance, but there were moments when he still looked vulnerable around his own penalty area.

DF Joel Matip, 5 — Had to endure some mightily tough spells as Chelsea looked to bombard the Liverpool box on the break. Never really look comfortable and was lucky to see Mount miss the target from close range after leaving him completely unmarked.

DF Virgil van Dijk, 6 — One of the busier afternoons the towering Dutchman will have this season. Given a torrid time along with his centre-back partner and he’ll be happy to escape with with three points.

DF Andrew Robertson, 7 — Did superbly to flick Mount’s enticing ball away from danger with Willian waiting to pounce. Whipped in a superb delivery for Firmino to double Liverpool’s lead and produced a brilliant run late on to relieve the pressure and drag his side over the line.

MF Georginio Wijnaldum, 5 — A quiet first-half display but more involved after the break. Sent a wild effort high and wide from just outside the box as Liverpool looked to kill the game off.

MF Fabinho, 5 — Showed excellent feet and acceleration to tee up Sadio Mané on the edge of the box in the move that led to the game’s opener, but guilty of giving Kante an abundance of space to fire home a Chelsea lifeline.

MF Jordan Henderson, 5 — A typically industrious display from the Liverpool skipper but struggled to give his side a foothold in the second-half. Replaced by Adam Lallana in the 84th minute.

FW Mohammed Salah, 7 — Produced some exquisite build-up play in the games early stages and teed up Alexander-Arnold with a perfectly-weighted back-heel. Had a sloppier second-half and was replaced by Joe Gomez in stoppage time.

FW Roberto Firmino, 8 — Another excellent performance. Doubled Liverpool’s lead with a brilliant header and was only denied a second by the brilliance of Kepa.

FW Sadio Mane, 5 — Never seems to stop working. Drew the foul that led to Alexander-Arnold’s stunner but had a quiet second half and was replaced by James Milner in the 71st minute.

DF Joe Gomes, NR — Replaced Salah in the 92nd minute. No time to make an impact.

MF James Milner, NR — Replaced Mane in the 71st minute. Hustled and bustled down the left as Liverpool looked to regain some authority.

MF Adam Lallana, NR — Replaced Henderson in the 84th minute as Liverpool looked to tighten things up. Minimal time to make an impact but helped his side over the line.