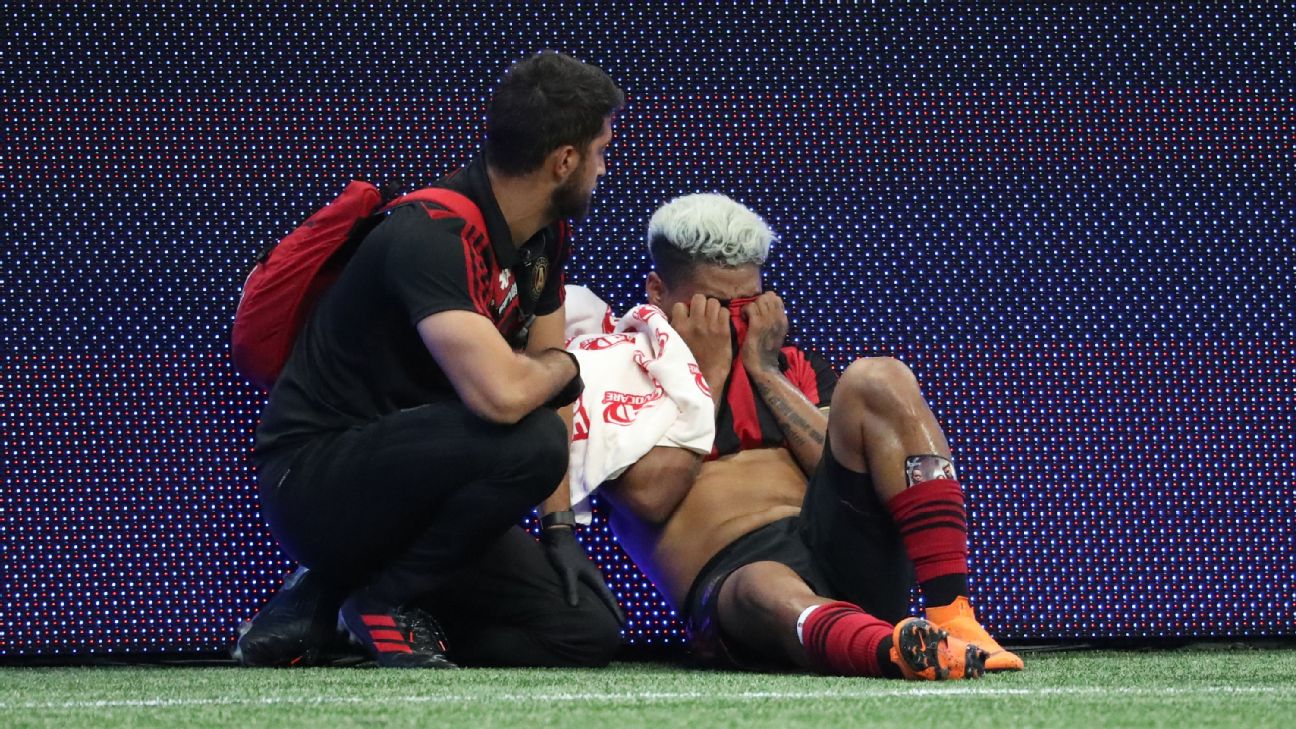 Atlanta United manager Frank de Boer says it’s up to striker Josef Martinez whether he returns from a right leg injury on the final day of the regular season Sunday against the New England Revolution (stream live at 4 p.m. ET on Sunday on ESPN+).

Martinez resumed training with the team Wednesday, the first time he has taken the field with his teammates since his Sept. 21 injury.

It originally was feared the injury could keep Martinez out through the MLS playoffs after he sustained both knee and ankle issues when his leg folded underneath him following a collision with a teammate.

Atlanta United is trying to secure second place in the Eastern Conference and a home game in the playoffs heading into the key Decision Day matchup at home (follow all the Decision Day action on the ESPN+ live whiparound show starting at 4 p.m. ET on Sunday).

The defending MLS Cup champions have played the last two matches without injured leading scorer Martinez and it has showed, totaling two goals while taking one point from road matches versus New York City FC and Montreal.

“It’s great to see [Martinez] out there,” midfielder Emerson Hyndman said. “Obviously he’s a big loss to the team with the amount of goals he’s scored for us and just the impact that he brings to our team. It’s great to see him back out.”

Martinez has 26 goals this season, third in MLS behind LAFC’s Carlos Vela (31) and the LA Galaxy’s Zlatan Ibrahimovic (29). Martinez, the reigning league MVP, led MLS in goals last season when he scored a record 31, a mark since matched by Vela.

Meanwhile, New England (11-10-12) will enter the playoffs as either the No. 6 or No. 7 seed in the East, having successfully overcome a dreadful 2-8-2 start following the arrival of Bruce Arena.

The Revolution, who could face Atlanta again in the first round of the playoffs pending Sunday’s results, need to win and have Toronto FC lose to Columbus to claim the sixth spot, but their current form offers optimism they do not need a specific matchup to make a postseason run.

They improved to 9-2-10 in their last 21 matches and are unbeaten in the last four (1-0-3) after defeating East-leading NYCFC 2-0 last Sunday to clinch a playoff spot. Teal Bunbury and Gustavo Bou scored second-half goals for New England while Matt Turner made six saves for his second consecutive shutout.

“I think it [was] a good way to sum things up at home,” Revs defender Jalil Anibaba told the club’s official website. “I think it does show the fruits of our efforts and hard work, but it’s only put us in a position to do what we want to do, so we’re obviously aware of what’s at stake moving forward.

“That’s going to be more important than anything we’ve done in the past so far.”

New England’s turnaround picked up steam when Bou was signed before the close of the summer transfer window, with the Argentine striker totaling nine goals and two assists in 13 matches. He formed a quick partnership with fellow Designated Player Carles Gil, one of just four MLS players this season to reach double figures in goals (10) and assists (14).

Atlanta has never lost to New England since entering MLS in 2017, winning three matches and drawing the other two. The Revs have been outscored 9-1 in their two losses at Mercedes-Benz Stadium and dropped the reverse encounter this season 2-0 on April 13 as Ezequiel Barco had a brace on either side of half-time.

Information from Reuters and the Associated Press was used in this story.