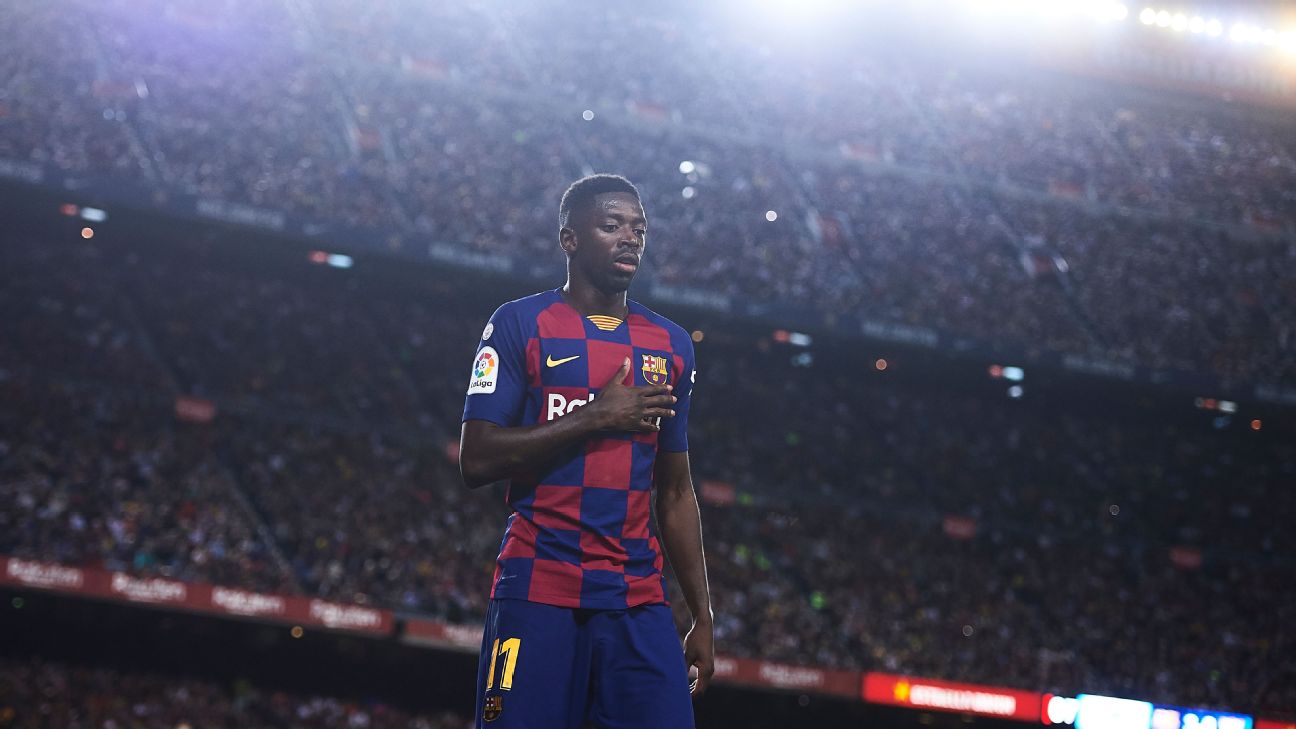 Ousmane Dembele is poised to miss the Clasico after being sent off for telling referee Mateu Lahoz he was “very bad” in Barcelona’s 4-0 win over Sevilla.

The France forward scored the third goal as Barca moved second in La Liga behind Real Madrid, with Luis Suarez, Arturo Vidal and Lionel Messi also on target at Camp Nou on Sunday.

But Dembele’s night ended in disappointment when he was expelled in the final minute for protesting a red card that had been shown to teammate Ronald Araujo, who was making his Barca debut.

Dembele had already been shown a yellow card when Lahoz branded a straight red to leave him facing a ban of at least two games.

“The player Ousmane Dembele was sent off for saying: ‘Very bad. You are very bad,’ to me while gesticulating with his arms from a close distance,” Lahoz wrote in his report.

Insulting a match official carries a suspension of at least two games. Atletico Madrid striker Diego Costa was banned for eight matches last season after he was sent off for abusive comments about referee Jesus Gil Manzano’s mother.

The Spanish champions travel to Eibar after the international break and then host league leaders Real Madrid on Oct. 26. Barcelona will have the option to appeal any ban handed to Dembele.

Barca coach Ernesto Valverde said he didn’t know what Dembele had said but joked that his level of Spanish meant it couldn’t have been anything too serious.

“I haven’t spoken with Dembele yet,” Valverde said. “It is a mystery. I don’t know what he could have said, but it can’t have been a long phrase. But I don’t know, more than anything because even I find it difficult to talk to him [in Spanish].”

Dembele was criticising Lahoz’s call to send off debutant Araujo for a last-man challenge on Mexican striker Javier Hernandez.

“It’s up to the referee to apply the criteria when it comes to assessing those kinds of fouls,” Valverde said when it was suggested the centre-back’s red card was not deserved.

“It didn’t seem like a foul to me at the time and it looks very harsh on the television.”

Barca’s win over Sevilla was their fourth on the bounce in all competitions since defeat to Granada two weeks ago. They are now just two points behind Madrid at the top of the table.

Sevilla, meanwhile, were made to lament a string of missed chances early on, with Dutch forward Luuk de Jong wasting three opportunities to open the scoring before Suarez struck at the other end.

“We started the game very well but once we went behind it was very difficult for us,” Sevilla midfielder Fernando told reporters.

“We had so many chances to score, but if you switch off for one second at the Camp Nou you get punished.”