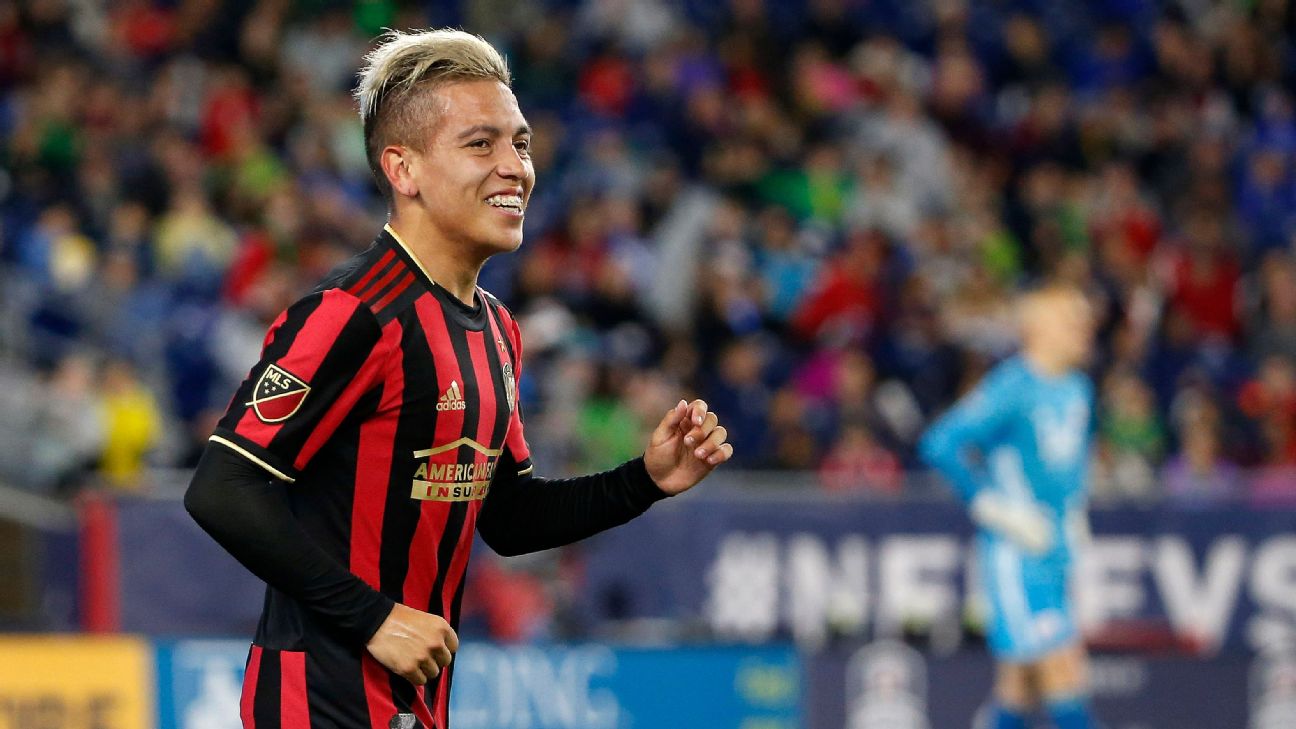 In some ways, 2019 hasn’t gone quite like Ezequiel Barco had hoped. The Atlanta United attacker has seen his time limited through a combination of international commitments and injuries. The 917 minutes he’s played in 14 appearances so far this season are just over half of what he logged in 2018, a campaign in which he was viewed as having underachieved.

Yet as Atlanta heads into the postseason — closing out the regular season with Sunday’s Decision Day tilt against the New England Revolution (4:00 p.m. ET, stream live on ESPN+) — there is a certain optimism surrounding Barco. His 27-minute stint last weekend against Montreal was his first since coming back from a muscle injury, and as manager Frank de Boer put it, the Argentine was “lively.” While Barco’s decision-making in the open field showed some signs of rust, he hit the bar with an audacious chip and forced a monster save from Impact goalkeeper Clement Diop on a free kick.

Granted, Atlanta’s form throughout the course of 2019 has been uneven, despite the fact that it is tied for second place in the Eastern Conference. A recent 4-1 hammering at the hands of New York City FC stands in contrast to the U.S. Open Cup title last month. The health of striker Josef Martinez remains a concern, even as he returned to training this week. Coaxing more out Pity Martinez is a priority. Yet there is a sense that if Atlanta is to even come close to repeating as MLS Cup champion, the play of Barco might prove to be the difference.

“Every team needs weapons,” said De Boer via telephone. “We have Josef [Martinez] of course as a weapon. He’s deadly around the box with his finishing. But one-v-one, duels, it creates an overload on the pitch because Barco is passing one man with his dribble. That’s crucial. That’s the quality of Barco: He can be lively even when he’s in tight spaces.”

But it’s not so much Barco’s legs, or even his heart, that are the reason for the positive outlook. Rather, it’s his head.

In 2018, Barco arrived with huge expectations after his $15 million move from Independiente, but the transition proved difficult. Later, Barco ran afoul of then-manager Tata Martino after an incident in which he reportedly made romantic overtures to a teammate’s girlfriend. Martino called it “an act of indiscipline,” and Barco was suspended for multiple games. In a sign of how far Barco had fallen down Martino’s depth chart, he made five postseason appearances during the Five Stripes’ run to MLS Cup but the longest was a mere six minutes.

This season there is no doubt that, if healthy, Barco will be on the field. And to those who have been around him, the midfielder has grown in all manner of ways.

“I think the difference for him was personal,” said Atlanta defender and fellow Argentine player Leandro Gonzalez Pirez. “I think he grew up here, he grew up as a person. He’s now more mature. He’s better on the field and better away from the field too.”

Gonzalez Pirez would know. He recalled how in 2018 he sat down with Barco “every single day” in a bid to help his compatriot adapt. Now the need isn’t as great.

“My job is easier now,” he said about mentoring Barco. “I try to be with him and make a good time together. Now, it’s less than last year.”

Barco acknowledges that the adaptation process took a while. The differences between MLS and what he experienced in Argentina with Independiente were stark. The culture and passion around the sport runs much deeper in his home country, and the language barrier also proved difficult.

“In Argentina, the people experience football in a completely different way,” he said with the help of an interpreter. “Here, it’s also in a good way, it’s just different. There’s some differences wherever you’re playing. You just have to adapt to it.

“The language, it’s very difficult. I think the harder part is the day-to-day, away from soccer. On the field, there’s basic ideas that I understand for the most part.”

The lack of playing time towards the end of 2018 humbled Barco as well. He was determined not to let that happen again, and set about impressing the new coaching staff from the beginning of training camp.

“Barco’s work ethic from the beginning was really high, and sometimes he wants to do too much. I think he’s right now choosing better moments to dribble and play simple,” De Boer said. “He’s one year older and so I think … he’s feeling more confident.”

Barco has been aided by the fact that now he has a more robust off-field support system in place. Although family members came to visit him periodically in 2018, they’ve been a more consistent presence this season. Barco related how his father, Omar, who was the first coach he ever had, spent six months in Atlanta earlier this year. Lately, his mother, Ester, has been with him.

“I think it’s very important for me to have my family close to me, just to be in their company,” he said. “I think having them around has served me well, both on and off the field. They were around last year for different lengths of time, but they’ve been around more this year.”

On those occasions when Barco has taken the field, the difference from 2018 has been noticeable. He scored four times for Atlanta before leaving to join Argentina at the U20 World Cup in May. He dazzled in that tournament but has been bitten by the injury bug twice since then.

Now that Barco is returning to health, De Boer is ready to lean more on the 20-year-old. The Atlanta manager told ESPN that he expects Barco to start in the regular-season finale against the New England Revolution and play about 60 minutes. The two-week international break that follows should allow Barco to gain even more sharpness.

“Barco’s very important for us,” Gonzalez Pirez said. “He can create a lot of chances for himself and other players too. We play different when he’s out there. I think with him on the field we have more of a chance to win MLS Cup.”

Perhaps 2019 will be a season to remember for Barco after all.