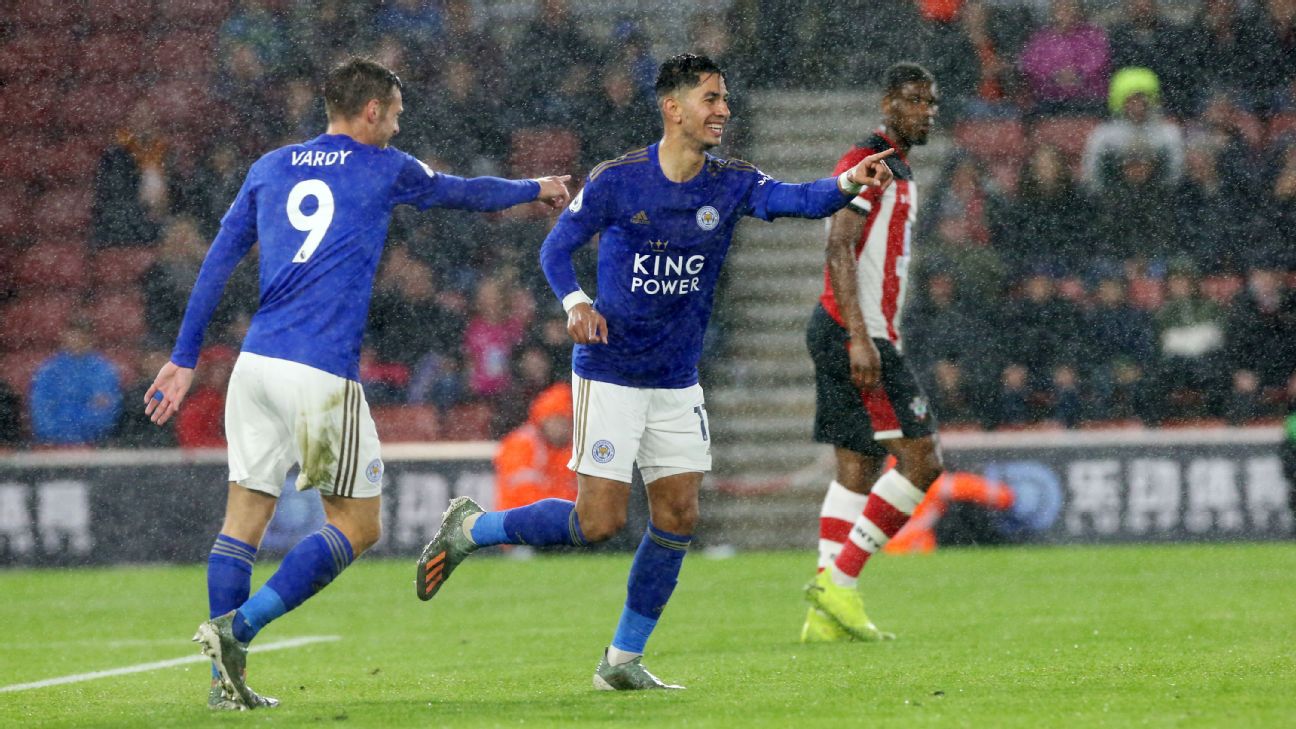 A wild weekend of football, and there’s a fantastic bunch of numbers to sift through. ESPN brings you the best of the lot.

Liverpool maintained their imperious form with a come-from-behind win against Tottenham, Manchester United finally remembered what it is like to win away from home in the league, Arsenal were held by high-flying Crystal Palace at home but the match of the weekend saw Leicester City driving a train through Southampton at St. Mary’s.

Can we start this with any other stat? With their 9-0 dismantling of Southampton, Leicester City have recorded the biggest-ever victory by an away side in an English top-flight league match in the 131-year history of the Football League.

This is also the joint biggest-ever win in league history, alongside Manchester United’s 9-0 win over Ipswich at Old Trafford in March 1995

In the process, Leicester became only the second side in Premier League history to have two players score a hat-trick in the same game (Pérez and Vardy); after Arsenal in May 2003 – also against Southampton (Pennant and Pires).

Liverpool’s unbeaten streak at home in the Premier League (35-0-10 W-L-T) is quite something. It is Liverpool’s second-longest in top-flight history (they have a streak of 63, which ended in Dec. 1980), the longest current run in the top 5 European leagues and the 2nd longest in PL history behind only Chelsea (86, 2004-08).

Scott McTominay’s opening goal in their 3-1 win at Norwich was Manchester United’s 2000th in the PL, with the Red Devils being the first team in competition history to reach this tally.

Marcus Rashford and Anthony Martial are the first pair of teammates to have both scored a goal and missed a penalty each in the same PL game. All’s well that ends well, eh?

Pulisic is the 4th player at 21 or younger to score a perfect hat trick (left foot, right foot, header) in the PL. He joins Romelu Lukaku, Robbie Fowler (x2) and Chris Sutton.

Since returning to the Premier League in 2013-14, Crystal Palace have both won (48) and scored (39) more penalties than any other side in the Premier League. A big reason for that is the man who won them the penalty that led to their first goal against Arsenal – Wilfried Zaha.

Zaha has now won more penalties (12) in the PL since the start of the 2016/17 season than any other player.

A not-so-good stat, this one. Only Everton (57) have had more different players shown a PL red card than Newcastle, with Sean Longstaff becoming the club’s 53rd player to be sent off in the competition

It’s still tight as ever at the top of the German league with Borussia Monchengladbach, Bayern Munich, Freiburg, and Hoffenheim all winning.

The last time league leaders Monchengladbach had as many points after 9 matches (19), was 32 years ago.

For the 11th time in Bundesliga history, the Revierderby between Borussia Dortmund and Schalke 04 has ended in a 0-0-draw – no other fixture has ended goalless as often in the history of the competition. Much hype about nothing?

PSG are running away with the French league again. Of course, they are.

Kylian Mbappé became the 1st player ever to score in 4 consecutive “classiques” (PSG v Marseille) in Ligue 1. He scored 2 in a comfortable 4-0 win for the Parisians.

More Mbappé Madness. He has been involved in 30 goals in Ligue 1 in 2019 (24 goals, 6 assists), more than any other player among the Top 5 European leagues this year. We really should start an “Mbappe Watch” soon.

A rare occasion — neither played this weekend. Ronaldo was rested for Juventus’ disappointing 1-1 draw at Lecce, while ‘El Clasico’ (Barcelona v Real Madrid) was postponed due to unrest in Catalonia.