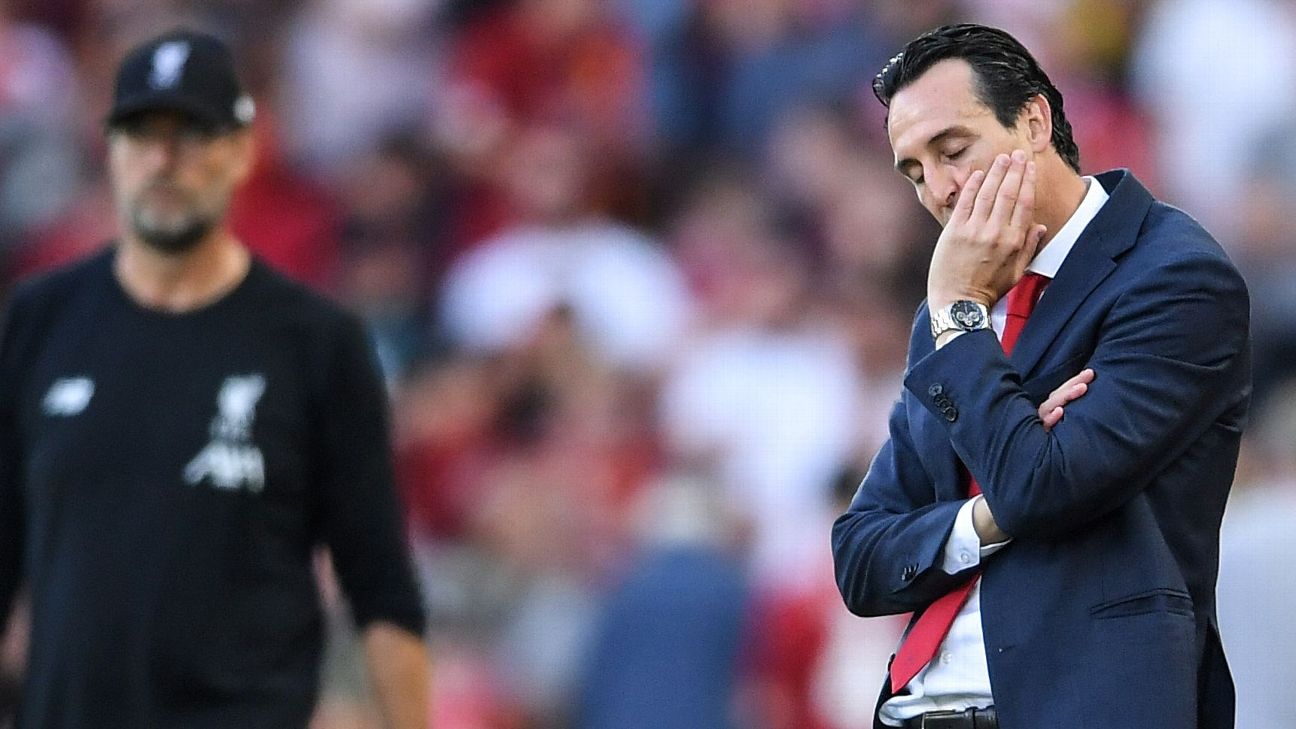 The race for the 2019-20 Carabao Cup is intensifying with eight matches on Tuesday and Wednesday, all live on ESPN+, to determine who reaches the quarterfinals. It’s been a fun tournament so far, with several high-profile shocks and an average of over three goals per game. But it’s not just the big clubs like Arsenal, Liverpool, Chelsea, Manchester City and Manchester United taking part: three League One teams and two from League Two are still alive.

ESPN’s Rob Dawson runs the rule over the competition with the viewing guide you’ll need to plan out your midweek afternoons.

Who wants to win the Carabao Cup most?

Both Chelsea and Manchester United (live on ESPN+, Wednesday, 4.05 p.m. ET) have bigger concerns this season than the Carabao Cup but two managers in their first full campaigns — Frank Lampard and Ole Gunnar Solskjaer — will also know the value of an early trophy. Lampard and Solskjaer made plenty of changes for their respective third-round ties, and there will be more rotation at Stamford Bridge on Wednesday, but neither manager will be in the mood to throw the game away.

United have suddenly rediscovered how to win away from home and should head to west London with renewed confidence after beating Partizan Belgrade and Norwich. Solskjaer is likely to rest one or two key players ahead of another away day against Bournemouth on Saturday, but he picked Aaron Wan-Bissaka and Paul Pogba (who is now out until December) against League One side Rochdale in the last round and not everyone will get the night off. Still, it’s likely youngsters Brandon Williams, James Garner and Mason Greenwood will feature.

After a mixed start to the season for Lampard, it was the 7-1 thumping of Grimsby in the third round that triggered their seven-match winning run. Christian Pulisic was a substitute when United battered Chelsea 4-0 on the opening weekend, but the manager would be a brave man to drop the American for this one after his hat trick against Burnley.

Liverpool and Arsenal (live on ESPN+, Wednesday, 3.30 p.m. ET) had differing weekends. Liverpool engineered a stirring comeback to beat Tottenham; Arsenal threw away a two-goal lead to draw with Crystal Palace and heap more pressure on manager Unai Emery. Oh, and fans at the Emirates booed captain Granit Xhaka when he was substituted, which he did not react well to.

Emery and Arsenal officials are planning to talk to Xhaka before the Liverpool game and the key question is whether the midfielder will captain the side again. Though it may be that he is taken out of the firing line altogether.

Emery’s position is becoming more precarious and defeat to a young Liverpool team — weakened team or not — won’t help the situation. After Liverpool, Arsenal have got games against Wolves, Vitoria (in the Europa League) and Leicester before the November international break and the Spaniard cannot afford to give the board any more reasons to pull the trigger before the January transfer window.

How many will Manchester City get against Southampton?

Another manager who had a weekend to forget was Ralph Hasenhuttl. He watched his Southampton team concede nine goals against Leicester on Friday night in what was the largest top-flight home defeat in the 131-year history of the Football League. And now there’s even more reason to panic as up next are two trips to Manchester City (live on ESPN+, Tuesday, 3.45 p.m. ET), who have scored 10 times in their last three fixtures.

– Dawson: Best yet to come from Sterling

Southampton are backing Hasenhuttl for now but two heavy defeats at the Etihad Stadium would ramp up the pressure further. He shouldn’t expect any favours from his opposite number Pep Guardiola, either. City were drawn against Championship side Preston in the last round but Guardiola still felt it necessary to start with Joao Cancelo, Ilkay Gundogan, Bernardo Silva, David Silva and Raheem Sterling. And Southampton’s last visit to City saw them lose 6-1.

Can Wolves keep stretching themselves?

Aston Villa and Wolves (live on ESPN+, Wednesday, 3.45 p.m. ET), are both likely to make changes but there should still be plenty of needle for this Midlands derby at Villa Park.

Nuno Espirito Santo is already having to juggle his Wolves squad as he balances the demands of the Premier League with what could become a gruelling campaign in the Europa League. Dean Smith, meanwhile, is focused only on top-flight survival, but he won’t want to let a good result at Brighton in the last round go to waste by falling at the next hurdle.

Jack Grealish, a scorer in the 3-1 win at the Amex Stadium, is likely to be missing after suffering a calf injury in the 3-0 defeat at Manchester City on Saturday.

What’s the best of the rest?

While there are certain to be heavyweight casualties at Stamford Bridge and Anfield, there will definitely be lower league representation in the draw for the next round with a host of matches live on ESPN+ on Tuesday at 3.45 p.m. ET.

League Two rivals Crawley Town and Colchester United go head-to-head, while there is also a League One battles between Oxford United and Sunderland.

The Premier League’s bottom club Watford travel to Goodison Park to play Everton, while Leicester, fresh from their record-breaking demolition of Southampton, face a trip to League One Burton Albion. The last time the two teams met in the competition in August 2012, Burton — who reached the semifinals last season — ran out 4-2 winners.