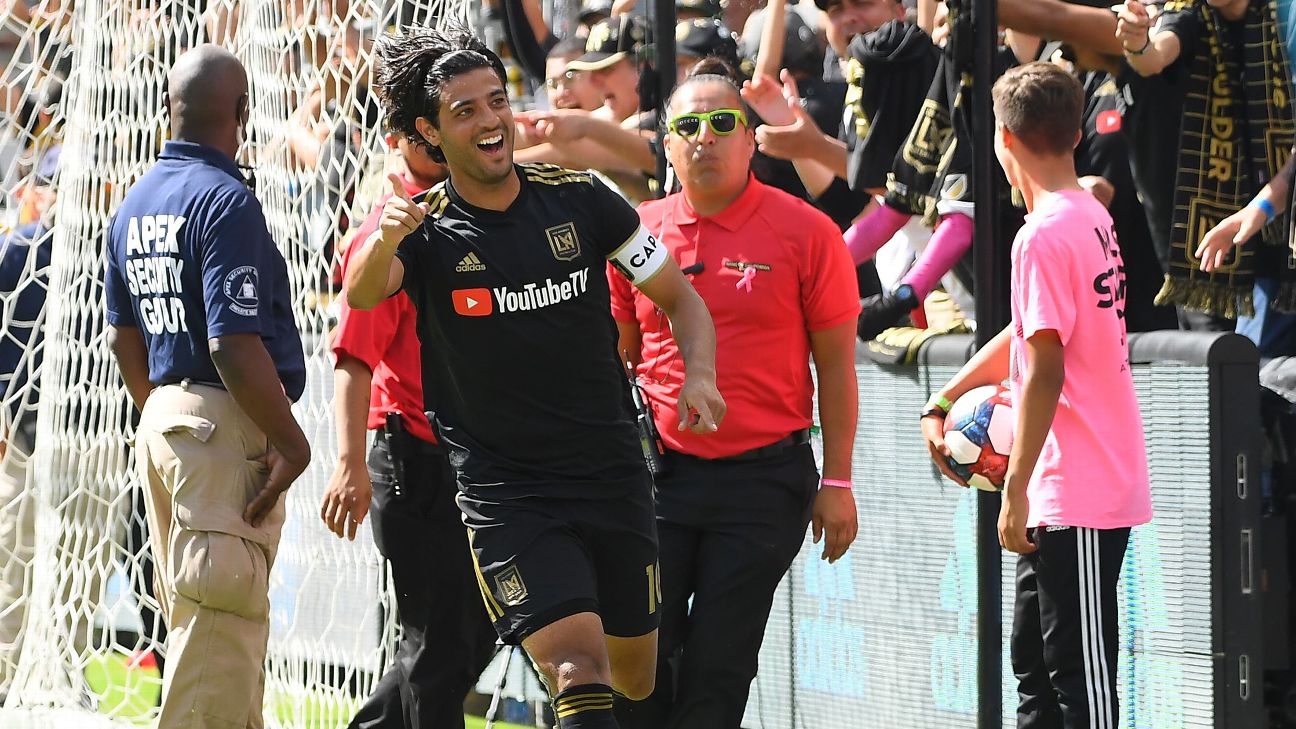 Carlos Vela‘s name will be the subject of headlines far outside the United States after his hat trick in the 3-1 LAFC victory over the Colorado Rapids — in U.S. legend Tim Howard‘s final game — saw him break the Major League Soccer record for most goals in a single season. It’s a feat that sees the Mexican place himself firmly among the greatest to ever play in the league and as one of Mexico’s all-time best players, even if that might sound controversial given how much hype he endured early in his career.

Four days before Vela made history, a video from FIFA of the goals from Mexico’s 2005 Under-17 World Cup final win over Brazil went viral on social networks in Mexico, on the 14th anniversary of the game.

It brought back memories of what was a seminal moment in Mexican football. El Tri had never accomplished anything near as important on the world stage. TV crews set up inside the living rooms of the players’ extended families back home to record reactions, and people poured out onto the streets after the game ended; even 14 years on, Mexican soccer fans still remember where they watched it.

It was heralded, too hastily in retrospect, as a watershed moment for Mexican soccer.

At the forefront of it all was Vela, the scorer of the opening goal against Brazil and the tournament’s Gold Boot winner. The smiley — hence his “hyena” nickname — 16-year-old from the Caribbean town of Cancun was thrust into the Mexican public’s consciousness. The hopes of a football-crazed nation were pinned onto the group, only three members of which — Vela, Giovani dos Santos and Hector Moreno — would go on to have any regularity with the full national team.

For Vela, a move to Arsene Wenger’s Arsenal swiftly followed before even a debut with Chivas in Mexico’s first division. Loans to Spain and attempts to integrate into the Arsenal squad failed, before the stability of Real Sociedad and now LAFC. In between there’s been a fractious relationship with El Tri, with Vela opting to make himself unavailable for the 2014 World Cup and being equally evasive post-Russia 2018.

His reputation in Mexico is that he’s not in love with the game he plays, with quotes from 2014 stating football has never been his passion still pervading. The critics when he moved Stateside said the transfer would allow him to be able to follow the sport he loves, basketball, more closely than he could from Europe.

The perception in Vela’s country, even today, is regularly slanted toward what he could’ve been, rather than what he is. But that looks unfair given Vela’s 2019. The player has stepped up in every regard.

Former Mexico coach Juan Carlos Osorio challenged players leaving Europe for MLS to be among the best players in the league, which is what Vela has done. And Bob Bradley threw down the gauntlet to Vela and asked him to get as close to the level of Lionel Messi as possible. The LAFC coach took his share of criticism for making the comment, which was part of the We Are LAFC documentary (stream on ESPN+).

Obviously, no player can match Messi’s superhuman output, but Vela has become to LAFC what Messi is to Barcelona and is the embodiment of the Designated Player tag.

Across his 31 appearances this season, Vela is top of the MLS chart in expected assists (10.2), expected goals (25.94), has taken more shots (159) than anyone else and has contributed directly to more goals (49) than Real Salt Lake, D.C. United, Montreal Impact, Orlando City, Vancouver Whitecaps, FC Cincinnati and Columbus Crew have scored all season. No one in the league’s 24-year history has scored more goals in a season than his 34.

MLS defenses clearly don’t stack up to those in La Liga, but if Bradley was asking Vela to be that difference maker for his team then the Messi challenge was just: Vela has contributed an average of 1.62 goals plus assists per 90 minutes for LAFC in MLS in 2019, compared to Messi’s 1.46 per 90 for Barcelona in La Liga.

Bradley has got out of Vela what other coaches couldn’t, coaxing him through one of the best individual seasons MLS has ever seen. And as for the lack of passion, the strop Vela threw when he was taken off in August’s El Trafico against LA Galaxy highlighted that he cares much more than is generally perceived, while the rivalry with Zlatan Ibrahimovic — stoked primarily by the Swede — has surely been spurring Vela on that little bit more.

Just like last winter when Barcelona came in for Vela, LAFC will likely be fielding inquiries from foreign clubs this time around, although the Black and Gold don’t see any benefit from letting him leave on loan.

And while Vela, at 31, is condemned from a Mexico national team point of view never to live up to the expectations generated by those heady days in Peru back in 2005, he’s almost more popular with LAFC fans because of it. Vela is a misunderstood genius who belongs to LAFC, embodies the club and has stamped his authority all over it. He’s found a home in Los Angeles.

The kid from Cancun was never cut out to seek out the type of fame and adulation that some players crave, but he’s found success on his own terms. And that should be enjoyed.