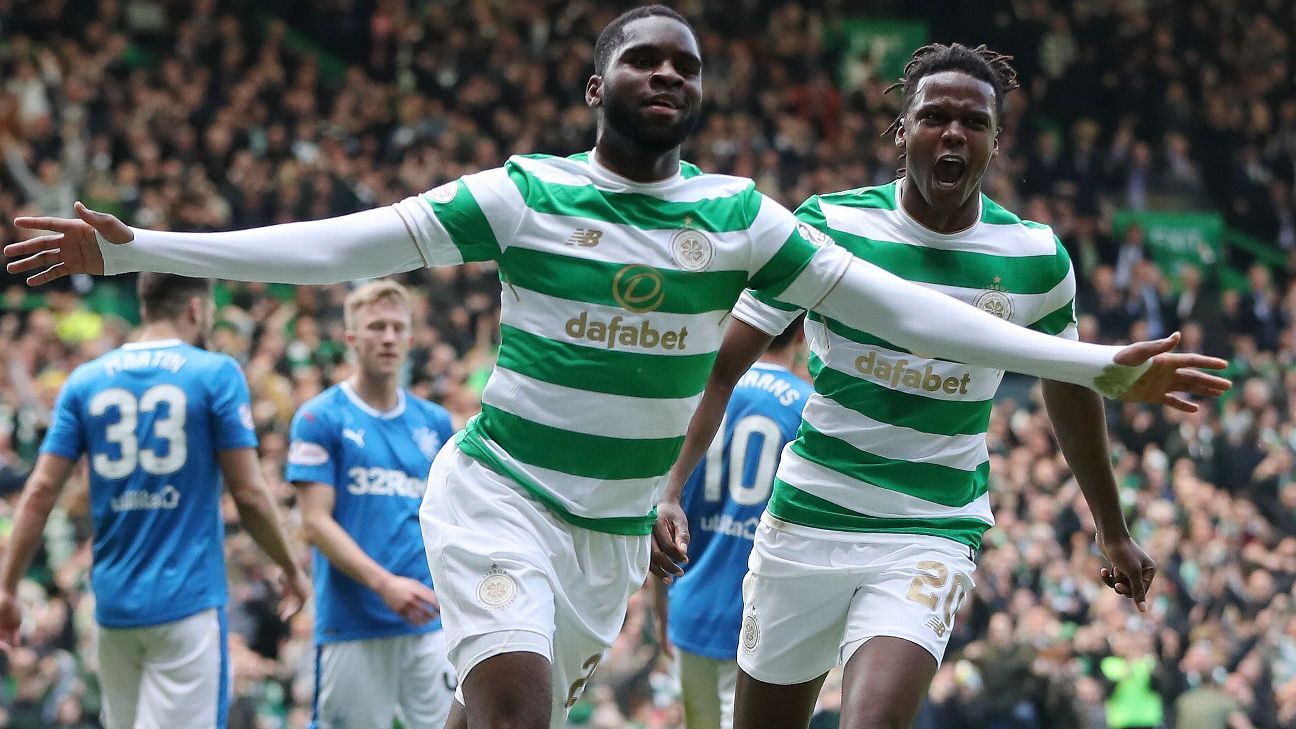 Celtic kept their 100% record and took the Scottish Premier League title initiative with a 2-0 win at Steven Gerrard’s Rangers in the Old Firm derby on Sunday.

Rangers had the first chance as Jermain Defoe almost sneaked through the defensive line, but Hatem Elhamed slid in to clear before the striker could get his shot away just ahead of goalkeeper Fraser Forster.

Niko Katic headed wide from the resulting corner and Defoe had another opening on 30 minutes but was flagged offside.

Rangers were made to pay as defender Connor Goldson gave the ball away cheaply on halfway and Michael Johnston ran at the defence before slotting a pass through to Odsonne Edouard. The striker kept his composure to strike a shot past goalkeeper Allan McGregor for his fifth goal in seven Old Firm games.

Rangers midfielder Ryan Jack was lucky to escape a red card for a poor tackle on Boli Bolingoli-Mbombo and, incrdibly, didn’t even get a yellow.

The home side continued to push for an equaliser before half-time and James Tavernier did well down the right to get past his man, but couldn’t find a teammate with his cross.

Gerrard made a change at the break, with winger Sheyi Ojo on in place of central midfielder Glen Kamara. And the Liverpool loanee tested Forster with a shot at his near post that was easily saved.

Alfredo Morelos also arrived off the bench shortly after and he was put through almost instantly, but took a poor decision and a wild shot from a tight angle rather than squaring the ball for his teammate.

On 68 minutes, Joe Aribo had a shot from distance that was partly blocked and easily gathered by Forster, but it was his last impact as Jordan Jones came on in his place.

Celtic were still dangerous on the break and Edouard fired over from outside the box when he should have tested McGregor. Then Olivier Ntcham had an effort which also few well over the bar.

Rangers then had McGregor to thank for a fine double stop to keep the score at 1-0. The goalkeeper got down low to save from Elhamed and then Ntcham with his feet.

As the last 10 minutes arrived, Tavernier had another shot from distance but did not trouble Forster. Scott Brown then had to be alert to come across and clear following a quick free kick that nearly caught the Celtic defence out.

Ntcham forced McGregor into another fine stop, this time with his hands. Scott Arfield then picked up the game’s first yellow card for trying to rip the shorts off Ntcham and tempers flared as the match came to a close.

Jonathan Hayes put the flames out though as he raced through to score in injury time. McGregor did well to save his initial effort, but Hayes poked home the rebound to give Celtic all three points before Jones was sent off for a late tackle.