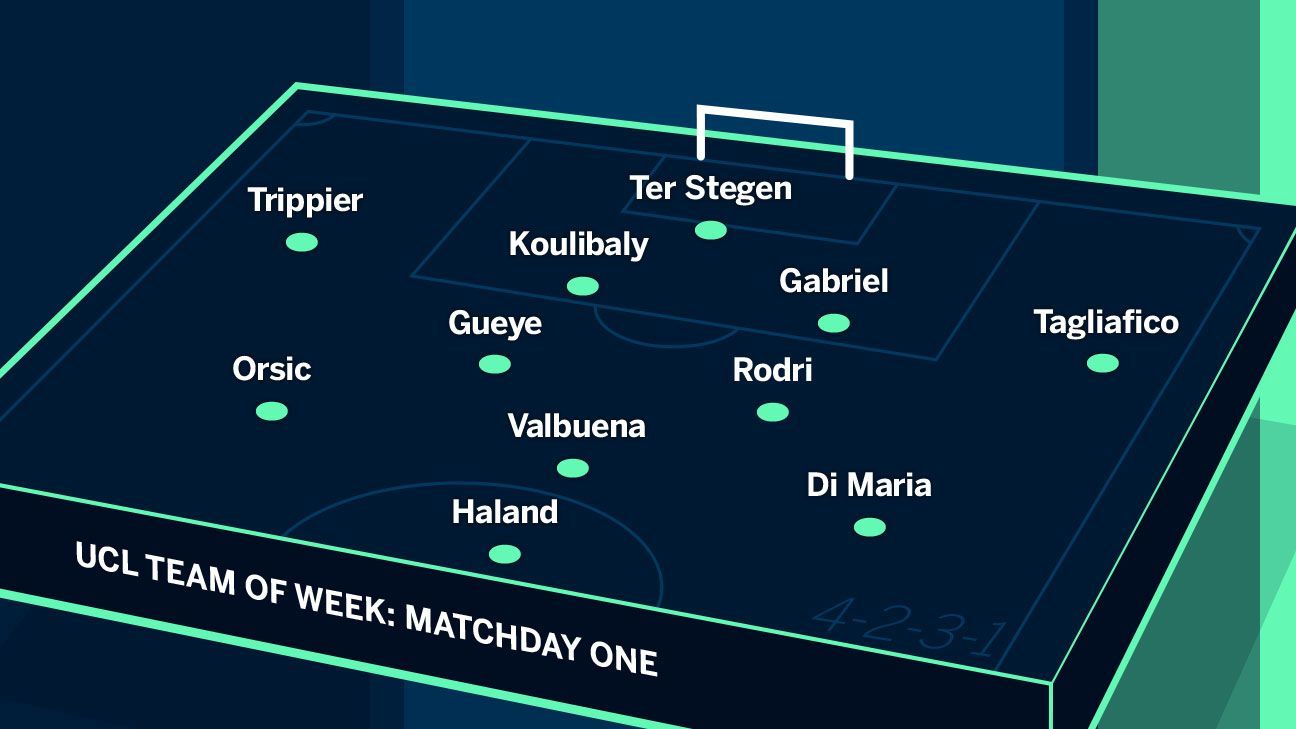 The Champions League group stage is back, but who were the stars this week? Here’s the best XI from the first games.

Barcelona were well under par in their 0-0 draw against Borussia Dortmund so it was fortunate they had a goalkeeper in such fine form. Ter Stegen brilliantly saved Marco Reus‘ second-half penalty, recovering smartly to gather the ball before anyone could gobble up the rebound, and also saved twice more from his countryman at close quarters. On his return to Germany, he saved Barca a vital point.

Atletico stormed back to secure a late 2-2 draw with Juventus and it was Trippier, with one of numerous searching right-footed deliveries, who put in the corner from which Hector Herrera powered in their dramatic late equaliser. Trippier was a threat all night and the signs are that Tottenham may regret losing a player who looks perfectly capable of influencing tight matches at this level.

If Napoli vs. Liverpool was the battle of Europe’s two hottest centre-backs, Koulibaly edged Virgil van Dijk this time around. He had a superb game against Liverpool’s front line in Napoli’s 2-0 win, supplying some crunching tackles and putting his body on the line throughout an entertaining, open game. He believes he is back to his best after arriving late to preseason training due to AFCON; he and new signing Kostas Manolas already look a formidable partnership.

The Brazilian defender was hardly a success at Arsenal but anchored the troubled Valencia back line superbly in their win at Stamford Bridge. Gabriel had Tammy Abraham, who has been in such excellent form in the Premier League, well under control for the majority of the evening and restricted Chelsea to a dearth of chances before Ross Barkley‘s late penalty miss.

Last season’s surprise package, Ajax, began comfortably with a 3-0 win over Lille and were spurred on by their excellent Argentine left-back. Tagliafico swung over the delicious cross from which Quincy Promes opened the scoring and then rose high to bullet home a header to score their third goal in the second half. His incursions up the left flank were a threat throughout and helped ensure no hangover from May’s semifinal disappointment.

Many people believe an uncompromising, dynamic midfielder like Gueye was exactly the kind of signing Paris Saint-Germain needed and his brilliant display in the 3-0 destruction of Real Madrid suggested they are not wrong. It was his driving run and sharp interplay that teed up Angel Di Maria to double PSG’s lead, and his energy was key.

Statistics do not always give the whole picture but here is a good illustration of what the young Spaniard brings to City’s midfield: figures from Opta showed he completed every single one of his 82 passes at Shakhtar Donetsk, something nobody in the Champions League has done for two years. It is some achievement for a central midfielder to operate with such control, even against a tame Shakhtar side. The 23-year-old’s work was far from conservative either: he had a direct hand in Ilkay Gundogan‘s clinching second goal.

What a night it was for Dinamo Zagreb, who battered Atalanta 4-0 — and what a night too for Orsic, a forward who spent several years playing in South Korea and China. The first goal of his hat trick was a wonderfully controlled first-time finish from the edge of the area. He could hardly miss the second, nodded home from close in; while the third was slotted home expertly after some tidy control. Dinamo have a poor record at this level, but look perfectly at ease this year.

At 34, Valbuena remains a class act and the Frenchman creative wiles were instrumental to Olympiakos’ surprise comeback to draw 2-2 against Spurs. His perfectly-weighted return ball sprang Daniel Podence clear to put the Greek champions back in contention and then finished impeccably from the spot to beat Hugo Lloris and complete an unlikely turnaround in Piraeus.

No Neymar, Kylian Mbappe or Edinson Cavani? No problem. Di Maria was in sensational form against his old club. He opened the scoring with a smart near-post finish from Juan Bernat‘s centre, and then doubled his tally with a laser-like drive from 20 yards that beat Thibaut Courtois to his left after fine work from Gueye. Di Maria is now 31 but his speed and movement perplexed Real all night, giving right-back Dani Carvajal a particularly torrid evening.

FC Salzburg will never forget their Champions League debut and the name of their 19-year-old centre-forward will surely stick in the memory now, too. Haland, the son of former Manchester City and Leeds player Alf-Inge, has the lot — pace, strength, size, power and clinical finishing ability, the latter of which was on show in a clinical first-half hat trick in the 6-2 win over Genk. The signs are that there is plenty more to come from arguably the best young striker in Europe.