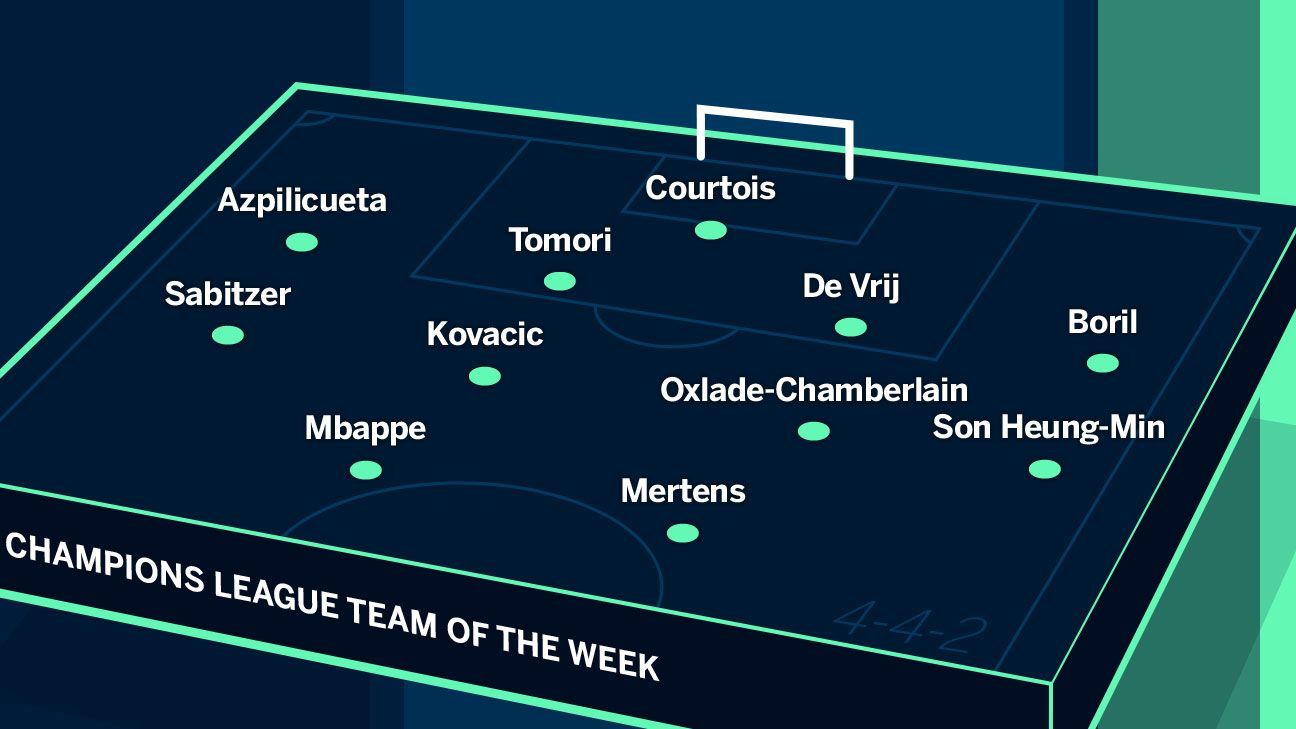 With the third set of Champions League group stage games finished, we look at who stood out from this week’s performances.

Courtois has not always found life comfortable under the relentless spotlight at Real Madrid but he answered some of his critics in the crucial win at Galatasaray. Fine early stops from Florin Andone and Younes Belhanda ensured they did not risk a shock defeat and also boosted the confidence of a keeper who, according to some reports, could be set to leave the Bernabeu if his fortunes do not improve.

The Chelsea captain’s fist-pumping delight at making a goal-saving tackle during the first half of their win at Ajax encapsulated everything good about his (and his club’s) work. Azpilicueta has taken a few brickbats in recent times but he kept Quincy Promes in check for most of the evening and set an example that the rest of an inexperienced team gleefully seized in securing arguably the best result of this matchday.

Who would have expected such a mature, gutsy performance from Frank Lampard’s young side? Their attitude was epitomised by the 21-year-old centre-back Tomori, who performed with the resilience and command of a grizzled veteran. Alongside Kurt Zouma he marshalled the back line outstandingly, ensuring the Dutch wizards rarely pulled Chelsea apart, and showed fine communication skills whenever things threatened to become frayed. In the absence of Antonio Rudiger, the England Under-21 international was Chelsea’s rock.

Inter’s 2-0 win over Borussia Dortmund was eyecatching and owed much to De Vrij, who was a rock at the back while also helping to decide the game at the other end. His perfect ball over the top to Lautaro Martinez outfoxed Dortmund’s defence and created a chance the Argentinian did not miss — setting Inter on their way to a victory that transforms their prospects of qualification.

Slavia might not have managed a famous result against Barcelona but Boril, their marauding left-back, will not forget his night. A line-breaking dart upfield four minutes into the second half finished with the 28-year-old bursting into the penalty area and, with his right foot, scoring like a striker. It was just a shame that Slavia’s unbridled joy lasted under 10 minutes before normal service was resumed.

The forward earns a place for his sumptuous winner against Zenit St Petersburg. Just before the hour he chested down a left-wing delivery, set himself and struck the sweetest of right-foot volleys, the ball seeming to be flying wide before curling just inside the far post and nestling in the top corner. It completed the Bundesliga side’s comeback from a goal down and will, along with Alex Oxlade-Chamberlain’s piece of genius for Liverpool, surely be among the most-watched goals in this season’s Champions League.

It is fair to say “The Ox” is back. He had already scored a well-taken, arrowed opener within two minutes of kick-off at Genk when he bettered it with an effort you could curl up and watch on repeat all day. His beautiful, outside-of-the-foot jab from just outside of the area doubled Liverpool’s lead in the 57th minute and, after such a frustrating spell on the sidelines following his cruciate ligament injury last season, he now looks primed to provide Jurgen Klopp with a fresh, dynamic option for the holders’ midfield.

The Croatia midfielder has not always been a favourite among Chelsea’s fanbase but he and Jorginho put in a tremendous shift at Ajax, seemingly covering every blade of grass in a game that was contested at a tremendous pace for the first hour. Perhaps the biggest accolade of all is that the injured N’Golo Kante was hardly missed in a performance of dynamism and authority that puts Chelsea in the driving seat to qualify for the knockout stage.

Spurs were back to their best against an admittedly sub-standard Red Star Belgrade and that owed plenty to a sparkling performance from Son. He tormented the Serbian champions throughout, scoring twice — his first a crashing half-volley at the far post — and linking up brilliantly with a similarly rejuvenated Harry Kane. There has been plenty of talk about which players Mauricio Pochettino might need to freeze out of his stuttering side, but the South Korean will undoubtedly remain one of his star turns.

With an hour of PSG’s assignment at Club Brugge played, the French side only had a Mauro Icardi strike to show for their night’s work. Then Mbappe, who had only entered the pitch in the 52nd minute, set about the Belgians thrillingly. A close-range header, a well-taken finish on the run and a clinical hat trick goal secured an overwhelming margin of victory — and he also had time to lay on a second goal for Icardi. PSG’s European campaign could not be going better at this point.

Mertens, once a sporadic scorer from wide, could hardly have dreamed of beating Diego Maradona’s goal return when he joined Napoli. But his work in the last three years has been astonishing and he showcased it again with two superbly-taken goals in the 3-2 win at FC Salzburg, overtaking the Argentinian’s haul of 115 and moving to within five of record-holder Marek Hamsik. Mertens achieved what few can in this season’s competition: outshining Erling Haaland, the brilliant young Salzburg striker, who bagged another two of his own.