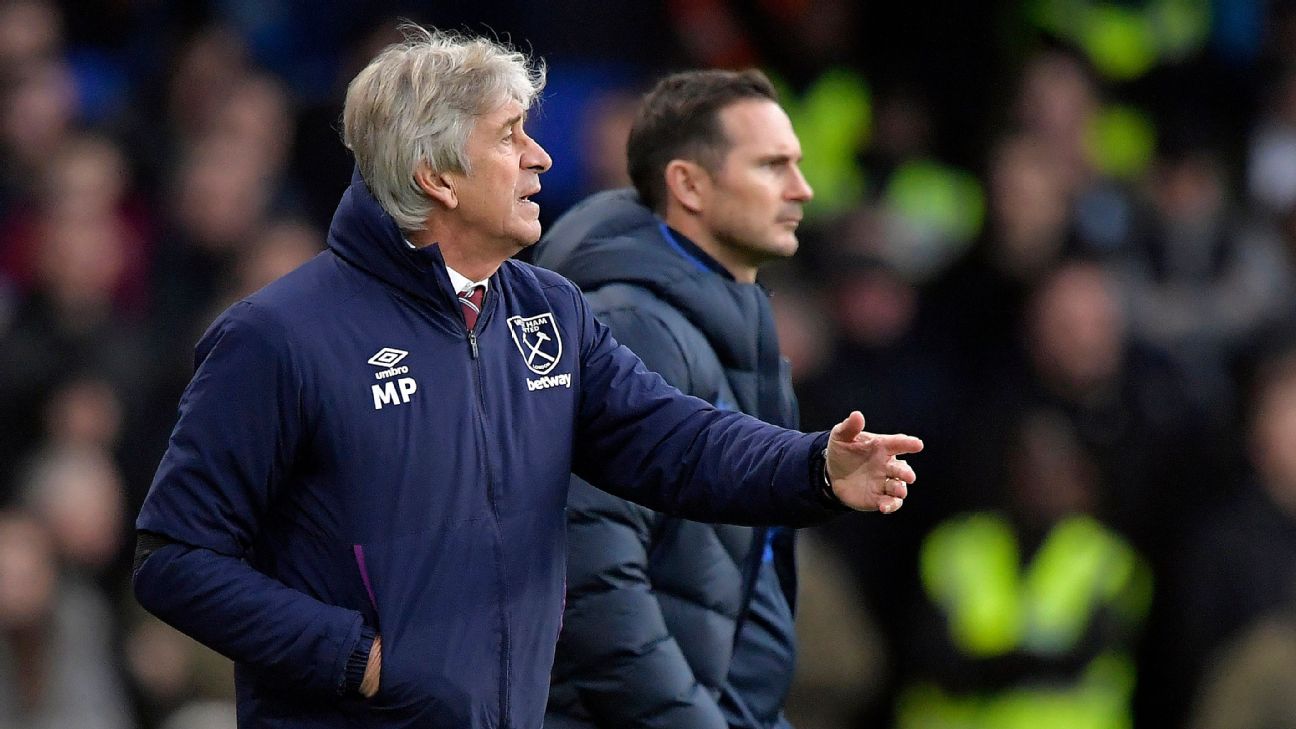 LONDON — Frank Lampard has had better days. The Chelsea manager is quite rightly being extolled as a breath of fresh air at Stamford Bridge and in the Premier League this season, but this was a day when two of his old bosses proved that there is more to management than youthful exuberance and being the next big thing.

Lampard has been on an upwards curve at Chelsea, exceeding expectations by putting his team in contention for Champions League qualification this season, and the recent sackings of Mauricio Pochettino at Tottenham and Unai Emery at Arsenal mean he is already the longest-serving manager (he has only been in the job since June) among London’s big three. But after being squeezed by Jose Mourinho and beaten 1-0 by Manuel Pellegrini’s West Ham, the 41-year-old was given a reminder that management at the top level comes with its ups and downs.

“Shocked isn’t the word, the Premier League is what it is,” Lampard said after the game. “No game is given to you. There were always going to be days like this.

“It’s one of those days and not a time for harsh reactions and judgments.”

After losing at Manchester City last week, and then this home loss to West Ham, Lampard has taken a knock, however.

When Mourinho, the man who guided him to three Premier League title medals at Chelsea, took charge at Tottenham less than two weeks ago, Spurs were 12 points and 11 places behind Lampard’s team in the league table. After beating Bournemouth on Saturday, at the same time as Chelsea were losing 1-0 at home to Pellegrini’s men, Spurs closed the gap on Chelsea to six points and one position, ensuring that they are once again firmly back in the race for a top-four finish.

Lampard will feel Mourinho’s breath on his neck now — the two men meet again when Spurs visit Stamford Bridge on Dec. 22 — but he will also watch the video of Saturday’s defeat to West Ham knowing that he was outdone by Pellegrini, his manager for a season at City, in a game that Chelsea always expect to win. Prior to this fixture, West Ham had not won at Stamford Bridge since September 2002, when Jermain Defoe and two goals from Paolo di Canio secured a 3-2 victory for the Hammers.

Had West Ham lost this game, Pellegrini would have been clinging onto his job at the London Stadium. Last Saturday’s 3-2 defeat at home to Spurs, in Mourinho’s first game in charge, was their fifth loss in six league games and they had only drawn the other.

So a run of one point from a possible 18 had placed Pellegrini in jeopardy. The Chilean’s position appeared even more vulnerable with the sacking of Emery on Friday because, with it coming less than two weeks after Pochettino’s exit at Tottenham, we are now clearly into sacking season. It was merely a question of who would go next? Would it be Pellegrini, Everton’s Marco Silva or Quique Sanchez Flores at Watford?

But by inspiring West Ham to victory at Chelsea, Pellegrini bought himself time, and also the earned the favour of the supporters, who will cherish this win more than most.

The former City, Real Madrid and Villarreal coach has earned a reputation for lacking passion and even enthusiasm over the years. There is little expression from the 66-year-old, on the touchline or when addressing the media, and his personality is cited as one factor why the West Ham fanbase has struggled to warm to him.

But even if his job wasn’t on the line, Pellegrini’s actions at Chelsea suggested that he felt something had to change. He was more visible on the touchline, more expressive in the technical area, than usual and his second-half spat with Felipe Anderson, when the two men argued in the dugout after the forward was substituted, showed that Pellegrini does have fire in his belly when required and his players responded by performing like a squad that retains faith in their manager.

Pellegrini made a big call by dropping goalkeeper Roberto, who had conceded nine goals in his past three games, in favour of handing a debut to third-choice David Martin, the son of former West Ham defender Alvin Martin. That change, one of four from last week’s defeat against Spurs, ignited the fans, who had chanted the keeper’s name throughout, and his presence in goal gave the West Ham defenders the reassurance they have lacked in the absence of injured first-choice Lukasz Fabianski.

Having been overrun by Spurs last week week, West Ham were organised and spirited and deserved to take the lead through Aaron Cresswell on 48 minutes. Michail Antonio made it 2-0 20 minutes later, only for VAR to rule the goal out for handball.

Cresswell’s goal was enough for the three points, but Pellegrini insisted that fear for his own job was not a factor in the victory.

“The most difficult thing this week was not worry about my job, but to convince the players not to change,” he said. “We had been making mistakes and they can lead to bad results, but we were consistent and solid all game.

“We didn’t come here to draw. We played as we should always play and the players did very well.”

Pellegrini might have played down his situation, but his reaction at the final whistle betrayed his true feelings when he congratulated every member of his backroom team with the kind of embraces and smiles that suggested relief was the greatest emotion.

It was a bad day for Lampard, but a great one for Pellegrini.