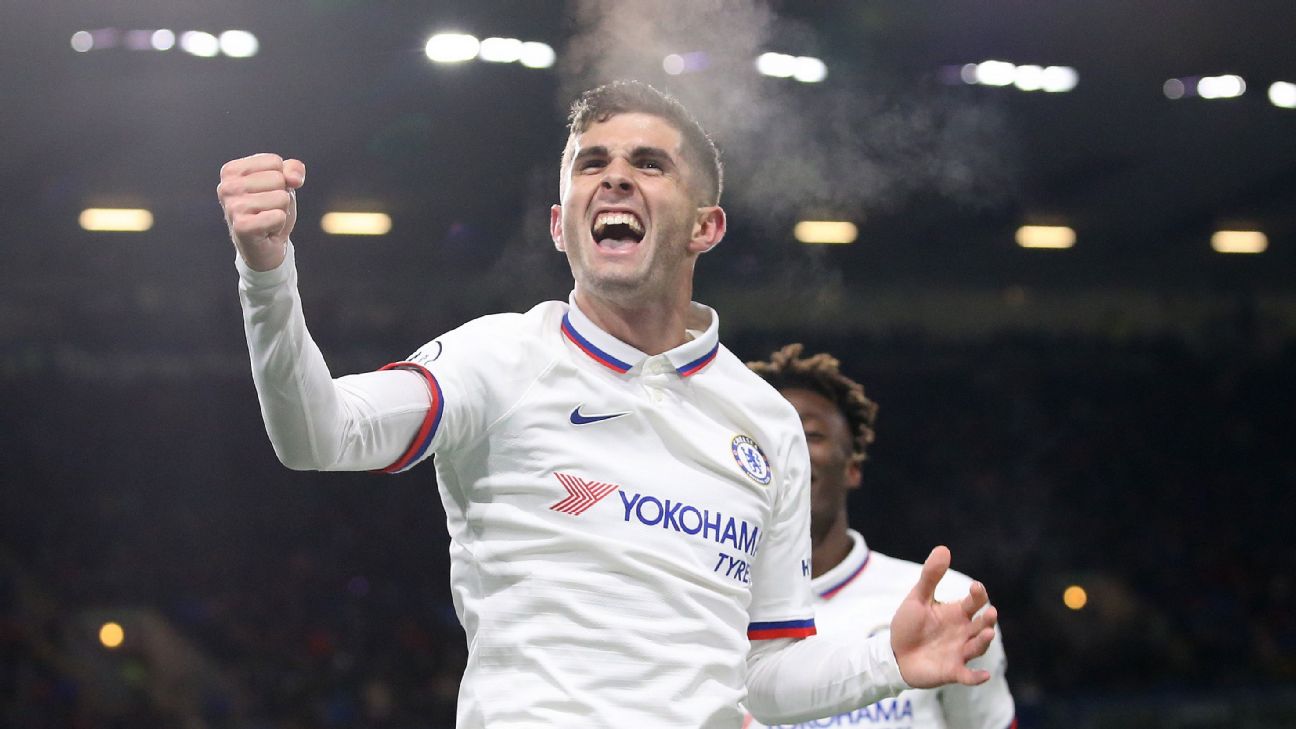 On the weekend that the clocks went back in England, it was timely that Christian Pulisic offered a glimpse towards a brighter future at Chelsea by scoring his first goals for the club with a hat trick in Saturday’s 4-2 victory at Burnley.

Until his trip to Turf Moor, the United States winger had endured a difficult start to life at Chelsea following his £58 million ($74.5m) summer arrival from Borussia Dortmund. Not only had the 21-year-old failed to score a goal for Frank Lampard‘s team during the opening two months of the season, he had begun to look like an expensive misfit, with his new manager displaying more faith in home-grown youngsters Mason Mount and Callum Hudson-Odoi.

Pulisic went public with his concerns over a lack of game time, claiming it was “very frustrating” to be repeatedly overlooked for a starting spot following the Stamford Bridge win against Brighton at the end of September. Lampard responded — diplomatically, but with a blunt edge — by making it clear that his only barometer for team selection was a player’s performance in games and on the training pitch and that Pulisic, like everyone else, would be measured to the same standard. The Chelsea manager was also quick to point out that, with Pulisic having a shortened summer break because of Gold Cup commitments with the U.S., the youngster would need time and space to adapt to his new surroundings at Stamford Bridge and in the Premier League.

But there was certainly no panic at Chelsea during the early weeks of the campaign, when Pulisic was struggling to make an impact. Eden Hazard made a similarly slow start to his Chelsea career when, as a 21-year-old, he arrived from Lille in the summer of 2012 with all the pressure on his shoulders that came with a big-money move. Hazard scored just two Premier League goals in his first two-and-a-half months at the club before scoring in a 5-4 League Cup victory against Manchester United on Oct. 31.

That goal sparked the Belgian into life at Stamford Bridge and the rest is history, so with United due to visit in the Carabao Cup again this week (stream live on ESPN+ in U.S. on Wednesday at 4:05 p.m.), has Pulisic arrived at a turning point at the same stage of his Chelsea career or should his Burnley hat trick be taken in isolation, with a healthy dose of realism thrown in?

Reality is never a bad thing when a player is over-hyped and Pulisic, by virtue of being the biggest star in U.S. soccer, is perhaps measured to an impossible standard back home. Succeeding in Europe is a huge challenge, but the Premier League is a step up from the Bundesliga and Pulisic is still finding his way in England. But it is nothing new for a highly-rated forward to struggle in the Premier League immediately after arriving from Germany.

Roberto Firmino, now regarded by many as one of the best forwards in the world, scored just once in the first half of his debut season at Liverpool after arriving from Hoffenheim for £29m in the summer of 2015 and his signing initially appeared to be a costly mistake. Leroy Sane was used sparingly by Pep Guardiola at Manchester City, and had to wait until December for his first goal, following his £37m switch from Schalke in August 2016, but the German eventually became a key cog in the team at the Etihad. And, across town at Manchester United, both Shinji Kagawa and Henrikh Mkhitaryan found the going too tough in England after arriving from Dortmund.

Kagawa’s struggle for consistency at Old Trafford prompted internal concerns about the move for Mkhitaryan in 2016 because of the belief at United that German football does not prepare players for the Premier League. One United source told ESPN FC that the more technical game in Germany led to a “game without tackling” that resulted in a culture shock for Kagawa and Mkhitaryan when they started out at Old Trafford.

Physically, Pulisic continues to show signs that he has some catching up to do before he can handle the weekly rough and tumble of the Premier League. But the workload is also much greater in England and that is another reason why he should be grateful for Lampard’s decision to gently introduce him into the team at Chelsea.

Last season, Dortmund played just 45 games in all competitions, with Pulisic appearing in 30 of those and starting just 17 of them. Already this season, Chelsea have played 15 games — a third of Dortmund’s fixtures last term — and the season is still just over two months old. Pulisic has appeared in 10 of those games. By the end of the campaign, Chelsea could contest well over 50 games and it would still seem a light workload compared to the 63 they played in all competitions last season.

Pulisic will get his opportunities, that is without doubt, but while the doom and gloom was not quite as bad as it may have seemed a month ago, it would also be foolish to suggest that he is now on a path to being a first-team regular under Lampard.

His treble at Turf Moor and impressive performance against Ajax as a substitute last week are positive signs, but as Firmino, Sane, Kagawa, Mkhitaryan and others have shown, it takes time and patience to succeed in the Premier League. Some get there, but many don’t.