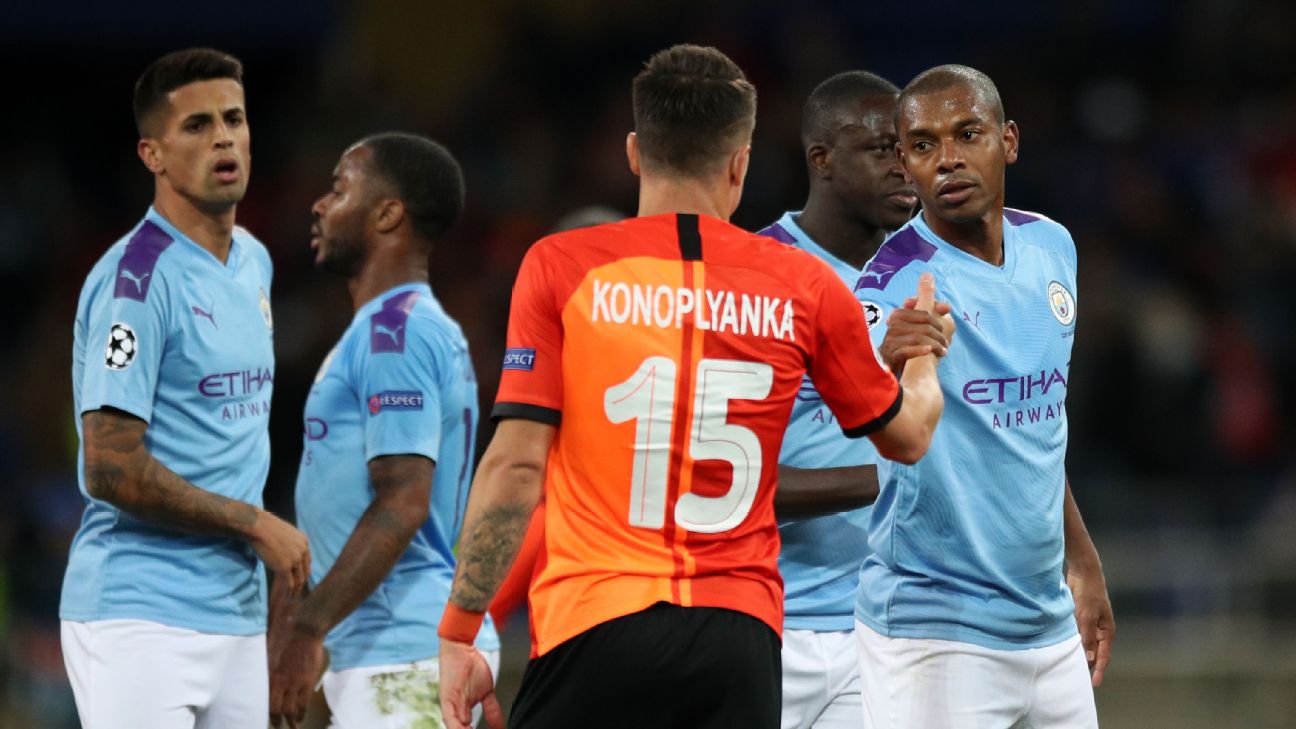 KHARKIV, Ukraine — Manchester City manager Pep Guardiola has suggested he will keep searching for a solution to his defensive crisis because Fernandinho and Nicolas Otamendi are too old to play every game.

Fernandinho slotted in for the 3-0 win over Shakhtar Donetsk after injuries to Aymeric Laporte and John Stones but Guardiola admitted afterwards he wants to try other options because the Brazilian and Otamendi have a combined age of 65.

“I didn’t have doubts [Fernandinho] could do it,” Guardiola told a news conference at Metalist Stadium. “Nico is 31, Fernandinho is 34 and next alternative is 18. For three or four months I don’t know what will happen.

“Both were incredible tonight. Nico showed incredible personality after what happened in the previous game. We need another solution — Rodri or Kyle Walker maybe — because they cannot play every game at their age.”

City were back to their ruthless best in Kharkiv with goals from Riyad Mahrez, Ilkay Gundogan and Gabriel Jesus ensuring their Champions League campaign began in style.

It was in stark contrast to 12 months ago when City kicked off with a 2-1 defeat to Lyon.

“I think already about Watford [on Saturday] as we don’t have much time but we started with a good result and I know we played really good,” said Guardiola. “In the first 10 or 15 minutes in the second half we created incredible chances to make the game over. So it stayed open. But all the guys were fantastic and it’s a good result to start — better than last season.”

As well as Fernandinho, Guardiola reserved special praise for Gundogan, who helped set up the first goal for Mahrez with a shot that came back off the post before scoring the second himself.

“He’s an exceptional player,” said Guardiola. “He knows how good he has to play as there are many others in that position. “We have problems centre-back but we have good players in other positions.

“I’m satisfied with his performance today and ever since we’ve been here together. People are starting to look at what he’s done.

“Without him last season when Fernandinho was out we couldn’t have won the Premier League in the way we did.

“He can play in two or three different positions and today he made an outstanding performance.”