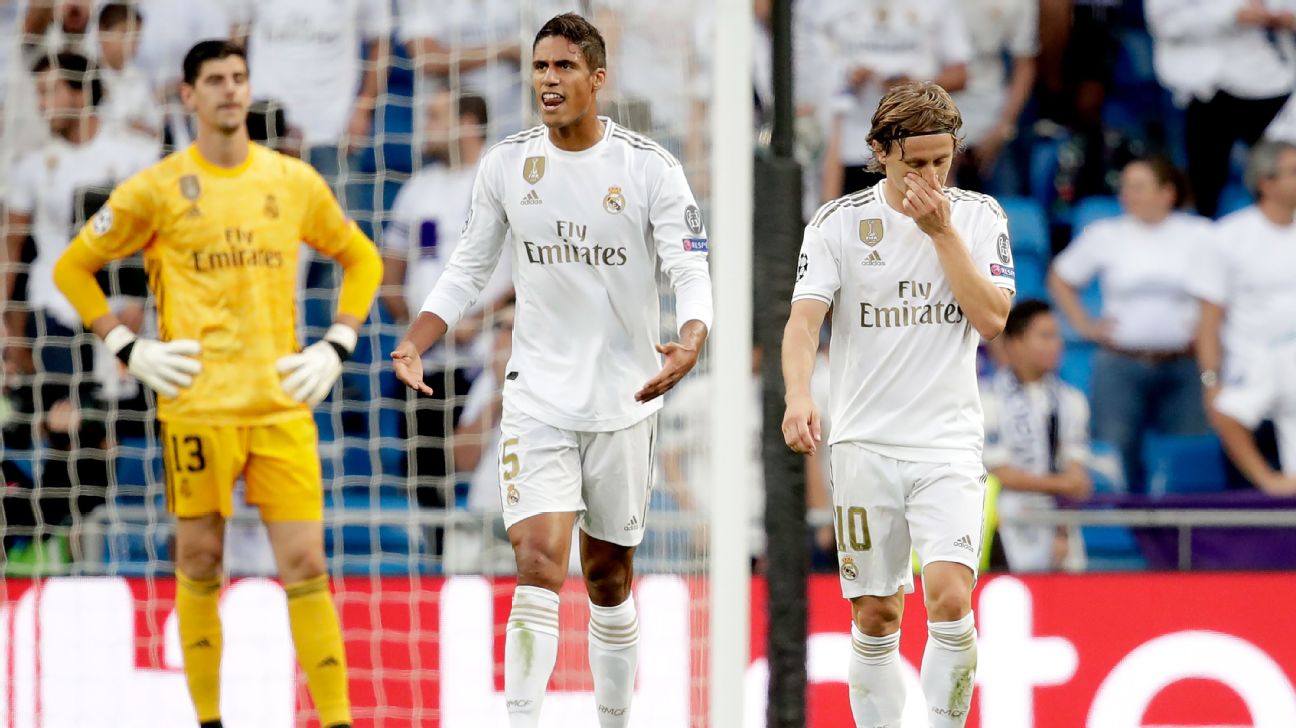 Real Madrid’s uneven start to the campaign continued as they were held to a 2-2 draw against Club Brugge at the Santiago Bernabeu. The Belgian side led 2-0 through an Emmanuel Dennis brace, but a revived Real were able to snatch a point in the second half courtesy of headers from Sergio Ramos and Casemiro.

There was a nice, quick passing movement through the middle and, at times, Real were able to carve the visitors open at will. When they were seemingly down and out at half-time, they summoned a real urgency in the second half which gave them a fighting chance.

— Hunter: Goalless Madrid derby had it all

— Marcotti: Why Atleti, Real were happy with derby draw

The hosts allowed Brugge to have far too much space and clearly didn’t respect the attacking prowess of their opponents until they were exploited. There was glaring miscommunication between senior players in certain passages of play, and they spent far too much time trying to walk the ball in instead of letting rip. Real Madrid were big favourites here and a draw is a real disappointment and puts Madrid in a tricky position in Group A.

5 — Zinedine Zidane began the game with a fairly static formation that didn’t allow his side to roam freely as we’re so used to seeing. For a long period of the first 45 minutes there was no Plan B, and while they paid off to an extent, his defensive-minded substitutions limited the attacking potential that was present on the bench.

GK Thibaut Courtois, 5 — Looked nervous throughout the first half and showed incredibly poor judgement on Brugge’s opener. Was substituted off at half-time due to an alleged shoulder injury.

DF Dani Carvajal, 6 — Created a nice opportunity in the 21st minute and seemed to gradually grow into the game from there. His final cross wasn’t always as consistent as Real desired.

DF Raphael Varane, 6 — Cleaned up with a few important tackles but the 26-year-old’s positioning is still questionable. Had a decent 28th-minute header saved well by Simon Mignolet.

DF Sergio Ramos, 6 — At fault for Brugge’s first goal and lost the ball on multiple occasions. Scored the header to get Real back into the game but was still disappointing overall.

DF Nacho, 5 — Wasn’t shy to come forward in the early stages but his fitness was called into question before and during the game. Was taken off at half-time.

MF Luka Modric, 5 — Started brightly but was indecisive throughout. Lost the ball which led directly to Brugge taking a 2-0 lead.

MF Casemiro, 6 — Came across as the sloppiest player on the pitch with some subpar vision and passing but redeemed himself courtesy of an 85th-minute header which proved the equaliser.

MF Toni Kroos, 6 — Allowed a few clear-cut opportunities to get away from him and wasn’t too willing to get after the ball. Curled in a nice assist for Casemiro’s header.

FW Lucas Vazquez, 5 — Too flashy with nowhere near enough substance. The Spaniard’s final ball needs a lot of work and he was rightfully substituted in the 67th minute.

FW Karim Benzema, 7 — Madrid’s No. 9 was easily their best player for the first hour or so of the game. Fought for every ball and carved out some strong openings even if he didn’t get on the scoresheet here.

FW Eden Hazard, 5 — Another disappointing evening for the Belgian who played far too deep and was often hesitant to pull the trigger. Showed nice movement, but still not good enough.

GK Alphonse Areola, 7 — Made a nice save in the 54th minute to keep it 2-0 that could wind up being a defining moment in Real’s season. Was fairly quiet apart from that.

DF Marcelo, 7 — Provided Real with the kind of fluid, attacking edge that they desired. Wasn’t the catalyst behind the comeback but certainly brought a creative spark.

FW Vinicius Junior, 6 — Lively at times but the Brazilian’s end product still needs improvement if he is going to be a force within this squad.