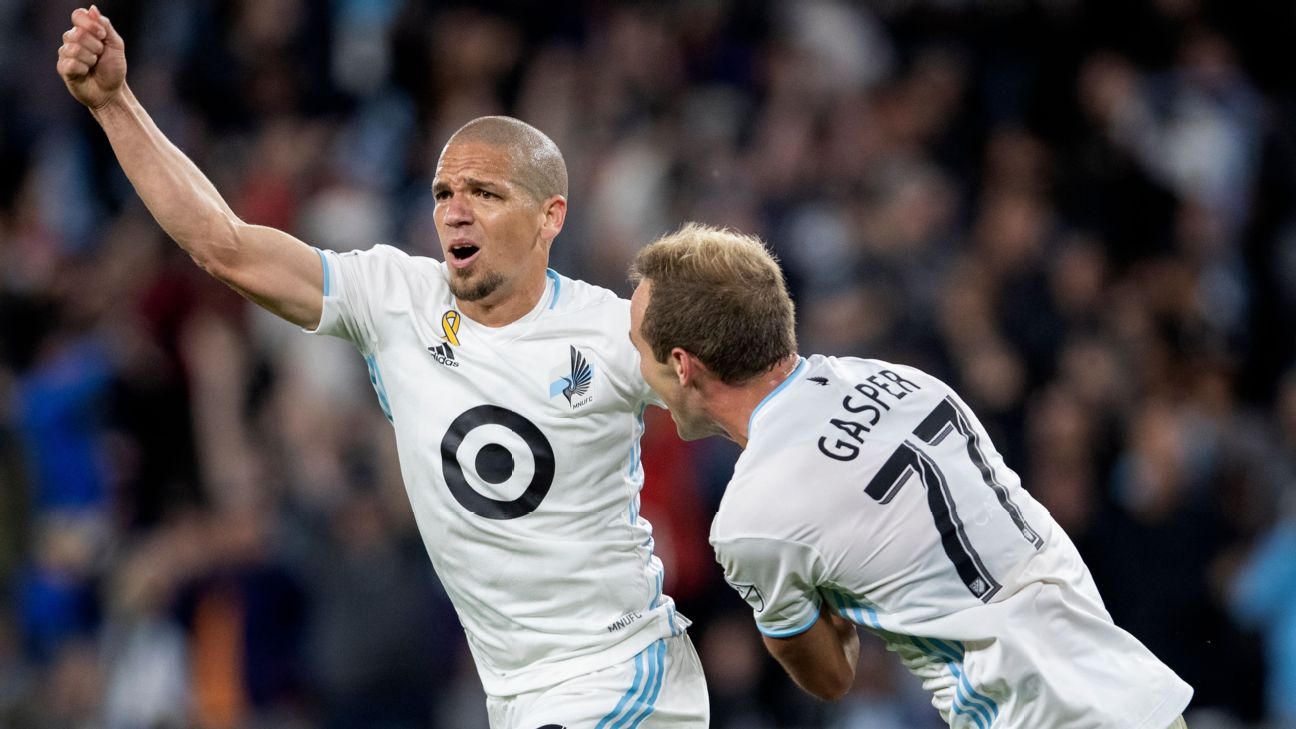 It’s hard to quantify leadership but you know it when you see it. Good teams have it, bad ones tend not to. And no one knows this better than Minnesota United.

Minnesota finished ninth in the Western Conference in each of its first two seasons in Major League Soccer, but with a newfound sense of leadership in 2019, the club finished fourth in the West and is primed to make some noise in the playoffs — especially as the Wonderwall welcomes the LA Galaxy to Allianz Field for the club’s first-ever postseason contest (Sunday at 8:30 p.m. ET, watch live on ESPN).

The Loons’ rise from doormat to 16/1 candidates to lift MLS Cup — the sixth-best odds in the 14-team playoff field — can be attributed to several factors. They’ve used MLS’ roster rules to their fullest, whether it was adding Designated Player Jan Gregus (tied for seventh in the league with 12 assists) from the international market, claiming Ozzie Alonso off waivers or selecting Rookie of the Year finalist Hassani Dotson in the SuperDraft.

The quality of the club’s leadership has mirrored this improvement.

In three seasons of MLS play, it’s already seen eight different players wear the captain’s armband. The revolving-door policy may remind those in the Land of 10,000 Lakes of the state’s last men’s expansion team, the NHL’s Wild, who sewed the “C” on a new player’s sweater every month.

The Wild’s was intentional, a conscious decision from then-coach Jacques Lemaire, to award his rag-tag group with the recognition and respect of the captaincy for those who showed the courage and gumption that demonstrated they deserved it. For United, it was done more out of necessity, and that was especially evident in the team’s debut season, when the Loons handed the armband to a pair of MLS debutants in Vadim Demidov and Francisco Calvo. The team accumulated 36 points and conceded a then-league-record 70 goals against in 34 matches.

“There were some games where honestly I did not know what to expect,” United center-back Michael Boxall told ESPN. “Whether it was going to be 11 guys fully committed and going to do their job for 90 minutes, or some people unsure of what they were doing that would lead to 45 minutes of flatness or confusion.”

Demidov was the club’s first ever captain in MLS, a then-30-year-old Norway international center-back with experience in La Liga and the Bundesliga. But three games into that inaugural campaign, after the Loons conceded 13 goals and his lack of pace was painfully exposed, he was exiled from the club and his contract was bought out a year later.

The club then turned to Calvo, then 25, Demidov’s center-back partner and a promising Costa Rica international. In his first match leading the Loons, they shipped another five goals in another loss. His time in the Twin Cities would be marked with inexplicable lapses in concentration and bizarre squabbles with media — and based on quotes after his eventual departure, even manager Adrian Heath.

“I think we had a lot of guys who were maybe looking around [for others to take the initiative],” said Ethan Finlay, who joined the club midway through the 2017 season, “and I don’t think we had enough [leadership] within our locker room.”

It didn’t take long for the front office to act. On March 31, after just four games, three losses and 18 goals conceded, United set about a convoluted trade and waiver pickup that brought Colorado Rapids holding midfielder Sam Cronin and left-back Marc Burch to the Twin Cities.

“There’s a ton of reasons why Sam was one of the players we identified … and a big part of that was his leadership,” Minnesota director of player personnel Amos Magee told ESPN. “We needed that sort of general in the middle of the park. We wanted his ability to cut off passing lanes, win battles and make tackles and distribute the ball, but we also wanted a leader and a warrior in that part of the field, too.”

Cronin immediately stepped into the breach.

“I did feel like there was a leadership void, and even a little deeper than that, I felt there was just a confidence and experience void, too,” Cronin said. “Just not a lot of proven MLS players on the roster.”

Cronin in particular had an instant impact: United won three of their next six following his arrival, keeping a pair of clean sheets. The club’s goals against per 90 minutes went from 4.0 down to 1.44 with him in the lineup.

Then, as the season entered its final weeks, he suffered a concussion, with Minnesota citing a head injury that kept him out the final nine matches of the 2017 season and all of 2018.

“I think [experience] was something … we were missing those first two years,” former Loons leading scorer Christian Ramirez told ESPN. “And you sort of had it with Burch and Cronin, and then they both went down with injuries and we were back to square one again.”

“Having seen the influence that Sam Cronin had on the group, we were like, we gotta go and get a similar type of guy [in 2019],” said Heath. “These people have been through it and done it, and that’s why they’re so invaluable.”

“Ozzie and I, we’ve seen it in this league, we know what to do, we know how to go about our business,” Opara said in an interview with ESPN. “I think stepping across the white lines, knowing they’ve got two guys who are always going to give it their all, put in the effort and show by example, I think that’s been big for us.”

Opara should know. He’s one of the frontrunners for this year’s Defender of the Year award, spearheading a significant improvement in Minnesota’s defense, epitomized by the club’s goals against going from 71 last year to 43 this — while scoring across the league is up, from 3.06 goals per game in 2018 to 3.19 in 2019.

With his acquisition pushing Calvo to left-back, and the emergence of rookie Chase Gasper, the Loons’ front office had sufficient cover to part with the talented Costa Rican. So in May, he was dealt to Chicago for $400,000 in allocation money, with that figure potentially rising to $525,000.

Multiple club sources told ESPN that Calvo struggled with the captain’s responsibilities, but an equal number said that could be explained by the circumstances of taking on a leadership role at a brand-new club in a new city at such a young age.

“I think Calvo has the personality and the characteristics of a leader, but I thought the captain’s armband was a lot of weight on a still-young kid and a new guy to the league,” former Minnesota outside-back Jerome Thiesson told ESPN. “If he could’ve just focused on being a good defender and being an important player, that would’ve helped him, because he tried to be a good captain while being a good new player in MLS while having very high expectations for himself.

“I think that would’ve been a lot for anyone to take on. Somebody had to take the job, and he did. He didn’t run away. I think if the club had had players like Cronin from the very beginning, who could’ve taken some of that weight off his shoulders, he could have been even better.”

With the club’s longest-serving captain now gone, and the likes of Alonso and Opara solidifying Minnesota into a dark-horse playoff contender, Heath had the ideal replacements in his midst.

“I called [Alonso] in and I said, ‘We’ve traded Francisco, we’re going to need a new captain,'” Heath said. “‘Is it something you’d be interested in?’ First thing he said: ‘Yes. Yes, I want to be captain.’ There was no hesitation.”

Those who spoke to ESPN went to great lengths to note the contributions of a host of new faces who joined the club alongside Alonso and Opara — Gregus, Dotson, Gasper, Vito Mannone, and Romain Metanire — as vital in the club’s improvement. But it’s clear that from the impact Cronin made on teammates during his short stay in Minnesota, and how glowingly all in the club speak of Alonso and Opara, the Loons now have leaders who know what it takes to win silverware, and won’t shy away from telling teammates what needs to be done in order to do so.

“There’s so many different ways of being a leader,” Heath said. “Sometimes it’s verbally; you get these certain characters who can get more out of other people, even when they’re playing badly themselves. That’s a tough thing to ask people to do. It’s dead easy when you’re playing well to have a go at somebody else; Ozzie don’t care whether he’s playing good, bad or indifferent, if somebody’s not doing what’s expected, he holds everybody accountable. And that’s the mark of a true captain.”

Alonso’s experience as a captain and an MLS Cup winner could prove indispensable in Minnesota’s first run at the playoffs.