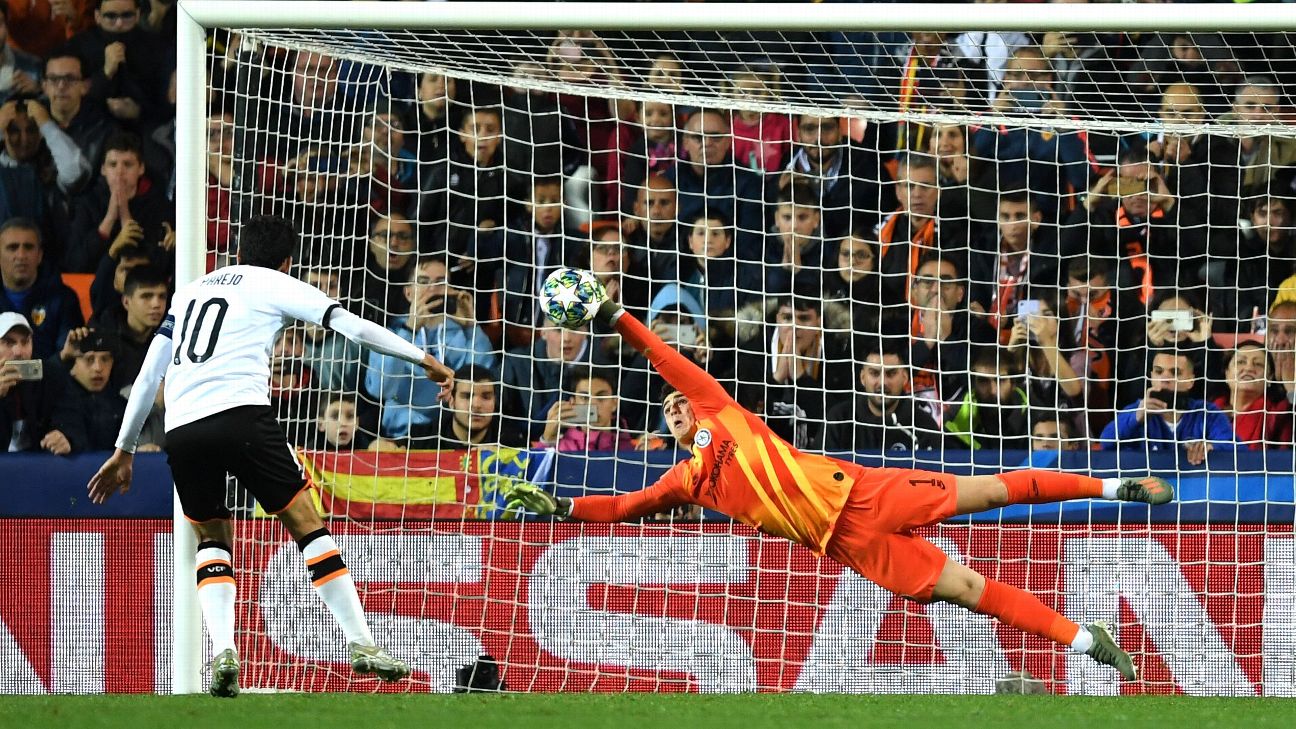 Chelsea’s hopes of Champions League progression hang in the balance after the visitors were held to a 2-2 draw by Valencia in a breath-taking encounter at the Mestalla Stadium. Knowing a win would secure progression, Frank Lampard’s side started brightly, but they were dealt a sucker punch in the 40th minute when Carlos Soler‘s volley crept past Kepa Arrizabalaga. The response was superb, and goals from Mateo Kovacic and Christian Pulisic looked to have sealed the Blues progression, but Daniel Wass‘ late cross-come-shot somehow evaded Kepa Arrizabalaga to snatch his side a share of the spoils.

The visitors started superbly and looked like a side with a point to prove as they took the game to the hosts in the early stages. Lampard labelled this an affair that his side must not lose. They didn’t and the Chelsea boss will have been delighted with the character his team showed to hit back almost immediately after falling behind.

The Blues showed lapses of concentration and twice escaped unscathed before falling behind shortly before the break and, despite a brilliant penalty save, Kepa might have done better to get to the Wass shot that bounced into his net off the far post. Despite that, Lampard’s biggest concern may be the fitness of top scorer Tammy Abraham, who limped off clutching his side in first-half stoppage time and was ultimately stretchered off at the end of the first half.

6 – The Chelsea boss dropped Fikayo Tomori and the Chelsea centre-back pairing looked nervous at times in his absence. Still, the Blues looked unplayable in attack during spells and that is – in part at least – down to Lampard’s squad selection

GK Kepa Arrizabalaga, 6 – Showed nerves of steel to calmly collect a dangerous, in-swinging corner as Valencia looked to apply some pressure of their own after a difficult start and produced an outstanding penalty save to thwart Daniel Parejo. Ultimately though he’ll feel disappointed with his involvement in both Valencia’s goals, particularly Wass’ fluke which the Chelsea shot-stopper seemed to pull his arms away from.

DF Reece James, 7 – The teenager is relishing his opportunity and produced another excellent display here. The full-back was up to the task in another defensively sound performance and produced plenty of dangerous balls into his opponents’ box that had the Chelsea forwards licking their lips.

DF Andreas Christensen, 6 – Displayed excellent awareness to snuff out a potential fatal through-ball that threatened to catch out everyone, getting his body in the way and winning the free kick for his side. He did, however, look shaky at times, and he probably didn’t do enough to convince Lampard he should be a regular in the starting XI.

DF Kurt Zouma, 6 – A monster in the air, the centre-back provided plenty of aerial resistance as Chelsea held firm early on and he threw himself into battle again as Pulisic poked home. He endured a heart in mouth moment when he presented Valencia with a gap they could have fitted several buses through, but thankfully Maxi Gomez fluffed his lines. Saw his goal-bound header hooked off the line with 10 minutes play as Chelsea looked to go for broke.

DF Cesar Azpilicueta, 5 – Guilty of pressing too high, too often.That led Zouma being dragged out of position in the build-up to Gomez’s miss of the season contender, and he failed to learn his lesson as the same player wasted another priceless opportunity. Ironically that came as a result of some good attacking play from the Chelsea skipper, who galloped forward before feeding the ball into the feet of Willian, but this wasn’t his best display and he didn’t cover himself in glory for the opening goal.

MF Jorginho, 5 – The Brazilian seems to be having his own “assist of the season” competition. He came desperately close to another at the Mestalla Stadium, but his attempted wonder-ball just about evaded Abraham and Pulisic. The midfielder had one of his quieter afternoons and was replaced by Emerson Palmieri 18 minutes from time.

MF N’Golo Kante, 6 — Showed flashes of brilliance but lacked conviction when it mattered. The France international delighted the visiting fans when he flicked the ball past Ezequiel Garay, leaving the Valencia man eating his dust, but his intended pass to Willian was poor. Should have scored when James picked him out in acres of space inside the penalty area, but he cleared the crossbar by some distance.

MF Mateo Kovacic, 7 — Showed both sides to his game in a performance packed with tenacity and trickery. His teammates’ delight was plain to see as the Croatian finally opened his Chelsea account with a superb effort into the corner — and what a time to do so, hauling Chelsea back on terms within a minute of going behind.

FW Willian, 6 — Squandered a huge early chance to give Chelsea the lead when he could only nod over from James’ cross from the right. In fairness to the Brazilian, the ball bounced awkwardly just in front of him. Swapped flanks with Pulisic mid-way through the first half and began to enjoy more success down his preferred right-hand side.

FW Tammy Abraham, 8 – Held the ball up superbly and produced some telepathic link-up play with Pulisic as Chelsea started the game with a spring in their step. Sent Kante on his way with a perfectly-cushioned header, and came inches away from opening the scoring himself, only to be denied by Jasper Cillessen‘s stunning save.

FW Christian Pulisic, 8 – Pacey and direct, the American caused the hosts plenty of problems in a strong first half. His lightning-quick feet left the home defenders desperately tackling shadows as Kovacic came close, but the youngster took matters into his own hands to stab past a helpless Cillessen to put Chelsea ahead briefly.

FW Michy Batshuayi, 6 — Replaced the injured Abraham at half-time. Looked certain to make the game safe when he raced in behind the back four before squaring to Willian, but the offside flag went up belatedly and the latter couldn’t find the net anyway. The forward was unlucky to see his deflected 90th minute strike superbly saved by the Valencia keeper.

DF Emerson Palmieri, NR – Replaced Jorginho in the 72nd minute as Lampard looked to shut up shop. His introduction didn’t have the desired effect as Valencia levelled 10 minutes later.

MF Mason Mount, NR — Replaced Willian in the 80th minute. Didn’t have too much impact, but flashed a dangerous ball across the face of goal with seconds to play.