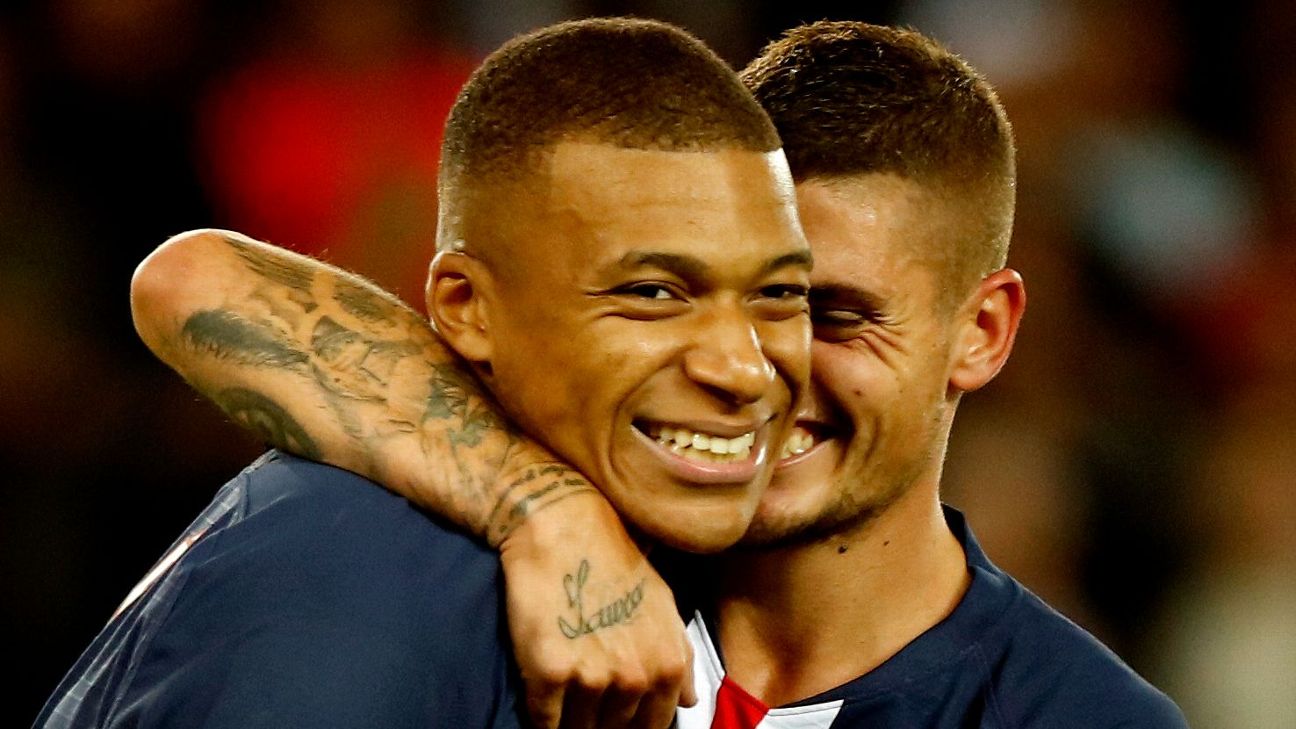 Every September, the excitement builds. And, as always, France is preparing itself for a new European campaign. There will be five clubs from “L’Hexagone” competing this season: Paris Saint-Germain, Lyon and Lille in the Champions League, plus Saint-Etienne and Rennes in the Europa League. Due to Strasbourg’s elimination in the Europa League playoff round this is one fewer than last year (PSG, Lyon and Monaco in one and Bordeaux, Rennes and Marseille in the other), but it’s certainly a more promising field than in many previous seasons.

The draw has not been too harsh toward French clubs either. As such, expectations are high because each squad involved has plenty of quality and potential. PSG, Lyon and Saint-Etienne boast lots of experience and while there’s less of it in Lille or Rennes, their rawness in European competition will be balanced out by the excitement and fervour of their fans.

So what can Ligue 1 expect out of this season’s European adventures?

Arguably the biggest game of the week anywhere in Europe is on Wednesday at the Parc des Princes, when PSG host Real Madrid. They’re so used to playing each other that it has become a bit of a classic.

PSG have already had their share of drama this season between the saga of Neymar‘s failed move to Barcelona, the injuries and the defeat at Rennes. With Galatasaray and Club Brugge also in their group, a strong start against a Madrid side in transition would put PSG in a great position. However, you can’t help but wonder what kind of drama will hit PSG again in the Champions League this season.

Fans in the French capital have experienced so many disappointments, but there is a feeling that this year could be different. A summer of good recruitment (Keylor Navas, Idrissa Gueye, Ander Herrera, Pablo Sarabia, Mauro Icardi) and the successful retention of all their stars — most notably Neymar, who is suspended for the first three European games — the Parisians can dream about lifting the trophy. Yet that’s all it will be in the end. Realistically, glory in Europe will once more elude Paris this year.

Unlike PSG, Lyon don’t have a super-club in their group. They probably enjoyed the best draw of all with Zenit St. Petersburg, whom they host on Tuesday, Benfica and RB Leipzig. The Germans are probably slight favourites to win the group because of their start to the season in the Bundesliga but Lyon can be upbeat about their own chances too.

For Sylvinho, the new manager, who has no experience at all in the Champions League as a coach, it is an exciting but daunting task. There have been ups and downs so far in Ligue 1 with some solid performances and tougher ones. There are a few tensions between the Brazilian and Moussa Dembele already while putting your destiny in Memphis Depay‘s hands could be risky. Nevertheless, Lyon have a very talented squad with strength in every line. Starting well at home before travelling to Leipzig could already be key in the progress of the team.

Lille are one of the minnows of the competition this season. Seven years since their last appearance in the Champions League and just one a year on from escaping relegation in Ligue 1, Les Dogues are in for a great ride.

The objective is to be a surprise package but it won’t be easy. Ajax are stronger despite losing Frenkie de Jong and Matthijs de Ligt, while Chelsea have a better squad and more cohesion. As for Valencia, they have quality but are in “crisis” after sacking coach Marcelino despite the great job he did over the past two seasons.

– ESPN’s Ultimate XI: Our team would win everything
– Schoenfeld: Romelu Lukaku is on a mission
– Ogden: Why English clubs are happy with CL draw

Even without Nicolas Pepe, their outstanding star of last season hwo has since joined Arsenal, Lille have plenty of young and very promising players (Jonathan Ikone, Victor Osimhen, Renato Sanches, Jonathan Bamba) ready to make their mark upon Europe’s elite. Nobody expected them to finish second last season and nobody expects them to qualify for the round of 16 this season, but they have a lot of belief and will hope that they can prove people wrong one more time.

There are only two French teams remaining but the draw has offered some interesting matches for both Ligue 1 participants.

Rennes, who beat PSG last May to win the Coupe de France for the first time since 1973, are hoping that they can recreate last season’s wonderful campaign when they beat Betis in the round of 32 before pushing Arsenal all the way in the round of 16. Their biggest issue will be the key players they’ve lost this summer (Hatem Ben Arfa, Benjamin Andre, Ismaila Sarr) but they still have talent (M’Baye Niang, Eduardo Camavinga, Joris Gnagnon), a very bright young manager in Julien Stephan and great team spirit throughout their squad. With Lazio, Celtic and Cluj in their group, they will have to hit the ground running.

On the other hand, Saint-Etienne can be seen as one of the favourites in their group with Wolfsburg, Gent and Oleksandriya coming up. Ghislain Printant’s team has plenty of experienced players (Yohan Cabaye, Mathieu Debuchy, Wahbi Khazri, Ryad Boudebouz) who can cope with the expectations of being back in Europe. The fans will also be a huge asset at the Stade Geoffroy Guichard, where opponents can expect an incredible atmosphere. Les Verts dream of a great European campaign like back in the day when they were a Europe superpower.

Overall, the French teams will be hoping for a better showing in Europe than they had last year. PSG and Lyon qualified from their groups before losing in the round of 16 of the Champions League, the Parisians humiliated by Manchester United’s incredible second-leg comeback and OL humiliated by Lionel Messi, the latter of which is far more acceptable.

Bordeaux (third in their group) were disappointing and Marseille (bottom with zero points) horrendous in the Europa League, which took some shine of Rennes’ sensational run to the quarterfinals. There is room to do much better this time around.