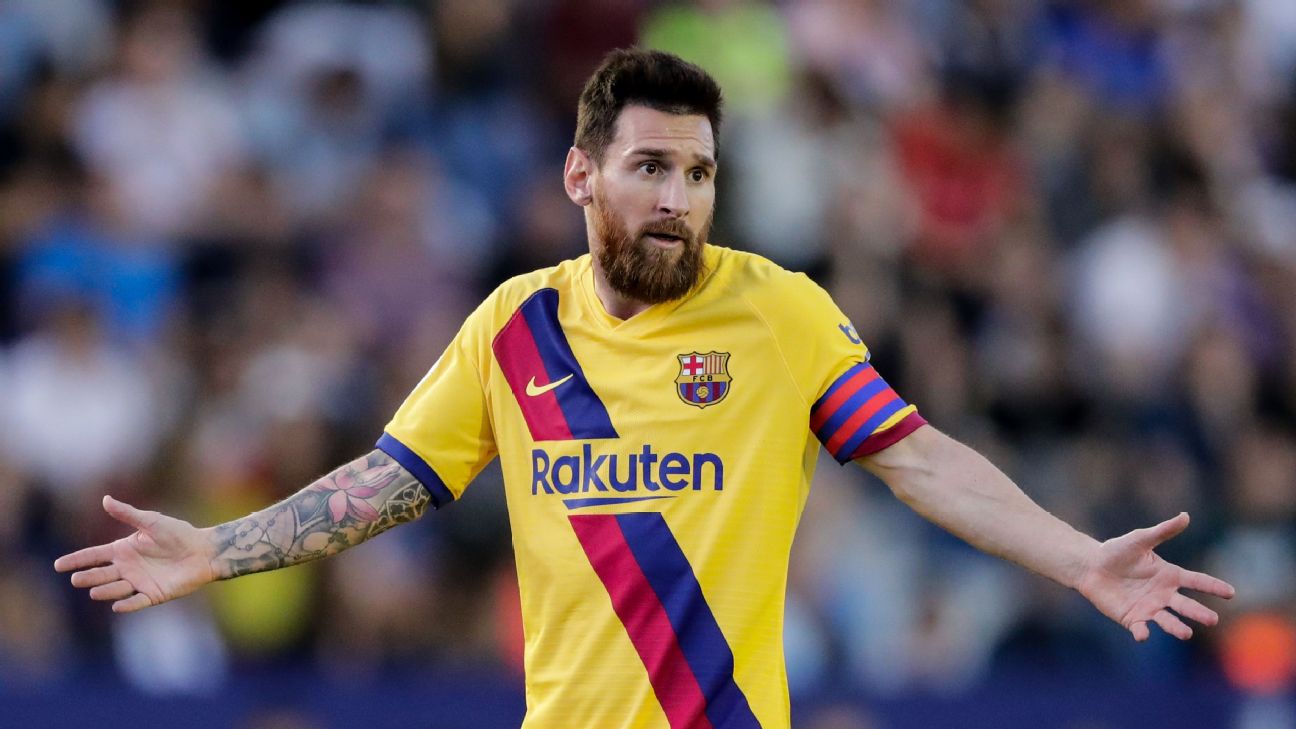 Your assignment this week is a pleasurable one.

Stop what you’re doing and imagine you are Lionel Messi. Full-on, please. Turn your attention to “intense” and answer me this: “If indeed you were Messi, would you be planning to leave Barcelona in the summer?” Serious question. And if not, why not?

The question arises for a number of good reasons.

Exhibit A: the performance in the 3-1 defeat to Levante at the weekend. Set aside the fact that Paco Lopez’s side has either beaten Barca or tested them to the absolute extreme in four of their last six meetings. This was, by a distance, the most miserable of all those Levante experiences for Ernesto Valverde and his players.

Without taking anything away from the Levante coach’s clear understanding of how to damage Spain’s champions, and his knowledge of where their soft underbelly lies, Barcelona’s performance at the Ciutat de Valencia stadium resembled one of two things. Either the humiliations in Paris, Turin, Rome and Liverpool that haunt the last few seasons of Luis Enrique and Valverde’s European campaigns, or some of the gutless, lifeless performances at the end of 2007-08 when Frank Rijkaard’s reign withered on the vine and they collected just 13 points from the last 39 available to them in La Liga that season.

Face the facts: On Saturday, the Spanish champions, in defeat to a Levante side against whom they led 1-0 with only 29 minutes left, showed the same lethargy, lack of competitive spirit and lack of intensity as in the months prior to a revolutionary overhaul of the entire playing and coaching environment at Camp Nou and the introduction of Pep Guardiola.

What about Messi? As is routine, he was his team’s most threatening player and could have scored a hat trick, but looked disenchanted, repeatedly got caught in possession and, in fact, looked utterly dispirited with what was happening around him.

Yes, it’s true that other results leave them top of La Liga. And sure, despite how threateningly Slavia Prague played when the Czech champions ripped into Valverde’s team for the second time in two weeks, Barca refused to succumb to their first home defeat in the Champions League for six-and-a-half years and stayed top of Group F with two matchdays remaining.

After Tuesday’s 0-0 draw, Valverde stated that things weren’t so bad, while Gerard Pique talked about only a “little patience” being needed before things go well. If you were Messi, would those be the key things on your mind? I don’t think so.

The manner of the loss in Levante didn’t just resemble the fin de siècle listlessness of 2008 or the recent list of European hammerings: Rather, it was a repetition of the first half in San Mames this season, the defeat at Granada and the bookends of drawing 2-2 at Osasuna when Valverde’s team opened limply and finished as if they had better things to be getting on with. Barca’s sluggishness and helplessness in the face of pace, intensity and self-belief is happening more often.

I’ve given you Messi-like freedom to total all these factors up and start to think as he might. Do I want to waste the last two or three great years of my career while the people in charge make a continued hash of regeneration and revitalisation in order for us to win in Europe? Win a Treble?

At this point in the assignment, let’s be practical. Messi has recently been emphatic that it’s not currently in his plans to play elsewhere, that his intention is to make Barcelona European champions again. He’s pointed out that his three kids are happy and settled in Barcelona and underlined how important that is to him. But in the spate of recent interviews he’s given, each one an extremely good, relaxed and informative discussion, there have been other clues.

It’s patently clear that he has no intention of hanging around Camp Nou, fiddling while Rome burns, simply because his salary is stratospheric. I believe the players and coaches, competitive animals all of them, who warn me that they’ve never experienced anything like Messi’s hunger to compete and win. For example he himself told RAC1 radio: “Obviously, I want to win and I want to win at this club … but I want to keep competing and winning.”

But other reasons for asking you what you’d do in Messi’s shoes aren’t just concerned with what’s been revealed about his contract, but the very simple fact that the news came out at all, the fact that someone actively leaked such details and what it all signifies — both for Barcelona’s greatest-ever player and the hawks (the world’s great clubs) who are watching greedily from the sidelines.

The fact is, as of Jan. 1, Messi’s contract allows him to negotiate with rival football clubs and, in the most extreme hypothesis, sign a deal that commits him to leaving FC Barcelona next June. So, I ask you: “In his position, would you go? And which clubs would you push your representatives to contact?

It’s an important subject not just because of the impoverished nature of what’s going on around Messi. And mark my words, it’s around him rather than about him.

Taking into account the injury that kept him sidelined at the beginning of the 2019-20 season, Messi has already rescued/carried/inspired his team on a variety of occasions since turning 32. And in what must count as one of the most humiliating defeats in the club’s entire history, at Anfield last season, Messi played sensationally, tormenting Liverpool, creating a hatful of chances to give the Catalan club their vital away goal and leaving Virgil van Dijk still convinced that Messi’s not only the greatest player ever but that he merits the 2019 Ballon D’Or.

However, stop to consider this. Who leaked the details in Messi’s contract to El Pais newspaper in September? FC Barcelona? Messi’s entourage?

There is, as physical laws teach us, no action without an equal and opposite reaction. Whoever leaked the fact that, as of June 2020, Messi is free to choose to leave Barca without a transfer fee did so with an agenda. If someone at the club leaked it then it’s because they want to test whether, without them looking culpable, they could rid themselves of a salary commitment of tens of millions of Euros. (Some would tell you that between his salary and what Barcelona must pay in tax to give Messi a net income, the total outlay would be in the region of €65 million.)

If it was someone from Team Messi then it’s a kite-flying exercise. Essentially, what, precisely, is out there for Leo in the unlikely event that he chooses to leave?

Please note that once the other media picked up the remarkable story and ran with it, first Pique confirmed it, then President Bartomeu attempted a “nothing to see here, keep moving on folks” tactic. In an interview with leading Catalan editors, Bartomeu confirmed the clause exists, said it was no big deal because of Messi’s loyalty to the club, stated that Xavi and Carles Puyol had had similar clauses, but he spoke openly about it.

I think it’s significant that he chose not to “plead the Fifth.”

When asked about it, Messi very pointedly said: “I can’t confirm anything because there are confidentiality agreements in our contracts. I want to be at Barcelona as long as possible. I’ve said throughout my career that this is my home. But I also don’t want to have a long-term contract and only be here because of it.

“I want to be here because physically I’m fine, to play and be an important member of the squad.

“And as I said before, I need see there’s a winning team because I want to keep winning things at this club.

“For me, money or a clause don’t mean anything. Other things motivate me and the most important thing is having a winning team.”

Reading between the lines, the use of “confidentiality agreements” implies that Messi was probably not impressed at Bartomeu confirming the news. Not to mention the use of phrases like “physically fine” and “the most important thing is having a winning team.”

In another interview, Messi very pointedly absolved Valverde for the defeat at Liverpool and blamed “the players,” not excluding himself from that self-analysis.

That, in itself, is an extremely pointed message to the club. The message is: “Renew the squad, find better, elite and winning footballers … or else.”

And don’t worry, whether or not they are jockeying him into assessing a move away, whether to Manchester City, Inter Miami, joining Neymar at Paris Saint-Germain, FC Barcelona’s power brokers still pore over every Messi declaration with fervor, examining and interpreting every nuance.

Messi’s message is that a certain core of this Barcelona squad was “blocked” by memories of their listless, limp thrashings in Paris, Turin and Rome when Anfield came around. Now the defeats at Granada, San Mames and Ciutat de Valencia are starting to hint that the malaise is spreading domestically too.

At a time when your best-ever playing partner (Luis Suarez) is slowing down, increasingly bothered by injuries, in the middle of a four-year away-goal drought in the Champions League, when “fresh bloods” like Ousmane Dembele and Antoine Griezmann have yet to light the blue touch paper … wouldn’t it be natural for Messi to be looking around and just making damn sure that there isn’t greener more succulent grass elsewhere?

In his shoes, what precisely would you do?

Stay and accept your lot? Stay but start to give a series of long, clear, informative interviews until fans and sponsors picked up the message and started to demand changes at the club? Stay but adopt a diva’s attitude to the transfer market and demand that specific key players were brought as reinforcements and certain underperforming players moved out?

Or would you weigh up a “repatriation” with Pep, a reunion with Neymar or an elopement with Suarez to David Beckham‘s Miami project?

It’s a lovely dilemma, albeit hypothetical, and one where we who argue it have nothing personal at stake. However, it’s a tough, draining, frustrating, risky one if you’re a 32-year-old who yearns to win two or three more Champions Leagues in order to compensate for the World Cup that now seems unlikely to ever be passed into your eager hands.

What should he do?