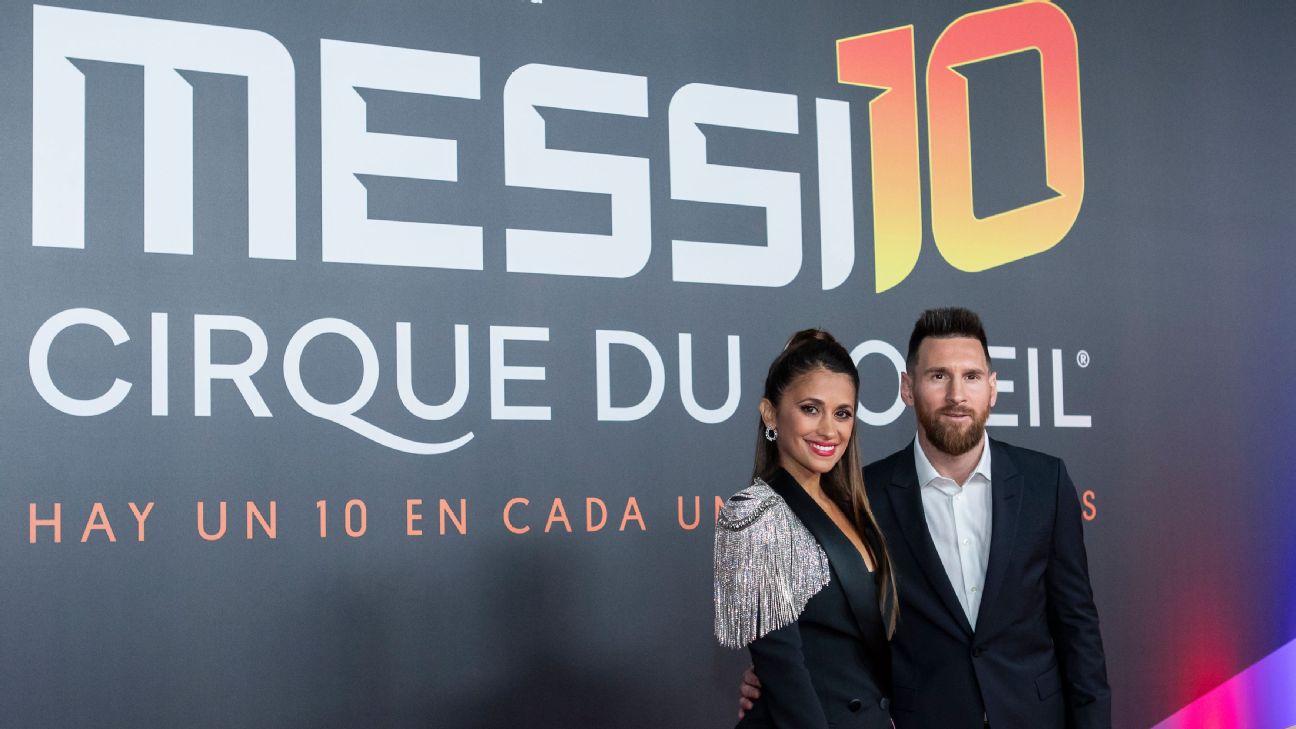 BARCELONA — Lionel Messi looked at Luis Suarez and, in amazement and in unison, they both rose to their feet and applauded what they’d just seen: a tightrope walker pulling out a ladder, placing it on the rope and climbing it with her hands.

The Barca pair were sat, front and centre, applauding a scene that was written to highlight his incredible balance in a Cirque de Soleil show based on his career. At one point, the No.10 gave the troupe a standing ovation. Messi’s had a dazzling career in football — Oct. 16 marks the 15th anniversary of his Barca first-team debut — but how many of his peers, past and present, can boast a spectacle like this?

Every scene is a nod to Messi, football mixed with the literal circus. Trampolines, diabolos, acrobatics, Icarian games, vertical ropes, lion dances and a portly referee cast in the false jester role, all of it to pay homage to the Argentinian and his incredible longevity. “There’s a No.10 in all of us,” runs the show’s tagline, splashed across posters all over the city, from Plaza Catalunya to Barcelona’s Sant Joan Despi training base.

If you’re a little bit lost, let’s rewind two years, when PopArt Music, a production company, first approached renowned Canadian circus company Cirque with the idea of producing a show based on Barca’s No.10. The Beatles had been done previously; Elvis Presley, too. There’s a show designed around Michael Jackson, but someone from the world of sport? Someone still active in their field? Never.

“I thought they were crazy,” said Cirque’s executive producer Charles Joron, about his reaction when the proposal dropped on his desk in Montreal. “But I said: ‘OK, I can’t say yes or no, because it’s so far away from what we’ve done that we have to sit down and look at it.’ The theoretical numbers were there: a huge following [133 million followers on Instagram], the attraction he has and how much of an icon he is, but we had to feel that if we got involved with this we would come out with a winning composition.”

There was quickly a realisation that, as Joron put it, “translating Messi into Cirque-ese” was easier than they thought. A number of words repeatedly appeared in both languages: speed, vision, balance, effort, strength, skill, dedication. All the magic Messi produces on the pitch could be translated into circus acts. Excitement piqued, the ball was rolling. The globe’s greatest circus company and the world’s best footballer were set for the collaboration you didn’t know you wanted to see.

Two years later, the red carpet rolled out for Spanish and Argentinian royalty at Parc del Forum in Barcelona. The setting for the Primavera music festival is now the home of The Messi Show (until December), just over 10km away from Messi’s Camp Nou playground. A huge white construction, 500 metres from the sea, houses two 1500-seater stands, which sandwich a stage representing a football pitch. And on the 10th day of the 10th month — a nod to Messi’s shirt number, if you missed it — the curtain went up.

Shakira was there to see it. So, too, was actress Paz Vega and some of the cast from Netflix show “La Casa de Papel.” Singers Carlos Vives and Nicky Jam were also present along with Los Cafres, one of Messi’s favourite bands. (They also supplied music to the show). Suarez joined Messi but there was a shortage of footballers in general due to players being on international duty. Barca youngster Ansu Fati attended, as did Barca veteran Jose Pinto. The ex-goalkeeper turned music producer, and one of Messi’s close friends, was a valuable go-between for Cirque during the creation process. He also wrote two tracks for the spectacle.

Messi and his wife Antonella Roccuzzo were the real red carpet attraction, though. They even left the kids at home. “They’ll come another night,” Messi said.

Messi chose not to see anything prior to the premiere but he had been involved in the development of the show, which isn’t biographical but rather celebrates his achievements, his talent, his fans and his family.

“The first thing Messi said to me was ‘I’m glad you’re not focusing on my life story, because there are commercials that do that, everyone does that. You’ve taken a different direction, which even interests me,'” said the show’s writer and director, Mukhtar Omar Sharif Mukhtar.

Mukhtar met with Messi another four times after that first meeting.

“As a fan, if you know Messi, you know he’s very quiet and doesn’t like to talk about his personal life,” adds Mukhtar. “My initial thought was that it would have nothing to do with his personal life. It was Messi that said: ‘I want my family integrated into the show because they’ve been important to who I am today.’ That took me back a little bit. Then I asked him more about what he wanted us to celebrate. He just said: ‘It’s great what you’re doing, but try and celebrate my achievements more than anything.’

So how did Mukhtar, a football fan growing up in England, manage all that?

He used his hip-hop background to fuse football and acrobatics to kick off. Freestylers juggle balls and Icarian performers incredibly juggle bodies in a dance-off style scene in a dressing room. Other scenes celebrate Messi’s many attributes: the tightrope walker represents his balance, people are flung into nets high above the stage to signify more than 600 career goals to date, an artist climbs a rope ladder towards the sky to visualise the pressure of taking a penalty, a traditional Chinese act of lion pillars are a tribute to Messi’s vision and somersaults end with Messi’s celebration, index fingers pointing to the sky in memory of his grandparents.

Messi winced as the contortionist performed. After taking a dive, a calamitous medical team repeatedly drops him as they carry him off on a stretcher. He proceeds to twist his body into eye-popping positions, turn his head where he shouldn’t and pop bones out of joints. Audience members were peeking through the gaps in their fingers. The scene ended with an ovation from Messi.

There’s the referee, a stumpy chap with a squeaky voice and a whistle who knew how to tickle Messi’s humour. A ball is nearly always present, as is the No.10, but the rest is pure surrealism: there’s also a streaker, a robot football, a customised six-axis industrial robotic arm and plenty more going on throughout a circus of two halves. Each one is 45 minutes long, of course.

Mukhtar insists the show is unique to Messi, even if some of it can be applied more generally. “Look at, say [Zlatan] Ibrahimovic: his show would be completely different if we were trying to do one, or David Beckham, who has a lot of fashion. With Messi, there was a certain sense of honesty that I had to take from him because that’s what I saw when I met him. And even though he is where he is right now, he still feels he has a lot more to accomplish. He’s still breaking records, he still feels he’s not done enough.

“That’s what inspired me the most, knowing that he’s still going. I want that to be felt in the show.”

Meanwhile, scenes overlap with montages of Messi goals, Messi moments and Messi animation on the scoreboard. Two huge ‘Messi 10’ shirts adorn suffocate the stands at one stage, a Barcelona one and an Argentina one, La Albiceleste blue-and-white colours falling over Messi’s head on the night as “Dia de Partit,” a famous Barca chant rings out. The show ends with Golden Balls dropping from the sky and one final banner carrying that slogan: “There’s a No.10 in all of us.”

“It’s about idolising Messi’s hard work and telling people: it’s not just him, you can do it, too, if you put in all the effort and work that we see in this show,” Mukhtar says. “That message is for whatever you do in your life. It’s triggering the No.10 within you, whatever that X-factor is. Whether you’re a doctor, or a policeman or whatever, you can do it, if you put everything into it.”

No Messi story can be totally complete without a Cristiano Ronaldo comparison. Have Cirque positioned themselves in the game’s eternal debate?

“My answer is quite simple: [Messi] had the vision to have a show created about him,” Mukhtar, a Manchester United supporter, laughs. “He had the vision. Anybody could have come to us and say let’s do a show about Ronaldo, but they didn’t, they came to us and said let’s do a show about Messi. I am glad to be doing a show for Messi. I like the poetry of Messi’s life and I am happy celebrating that.”

Joron imagines it will be difficult to find someone as worthy as Messi for another sport-inspired Cirque show.

“You have to have something that’s at that level,” he says. “So once you’ve done Messi, you start looking around and there aren’t many others that can say ‘do me, do me.'”

While Ronaldo’s PR appears much more polished, Messi now has a circus to add to a theme park that will open in China in 2020. Messi’s already immortalised on the pitch but he’s now actively embracing the theatrics off it, too.