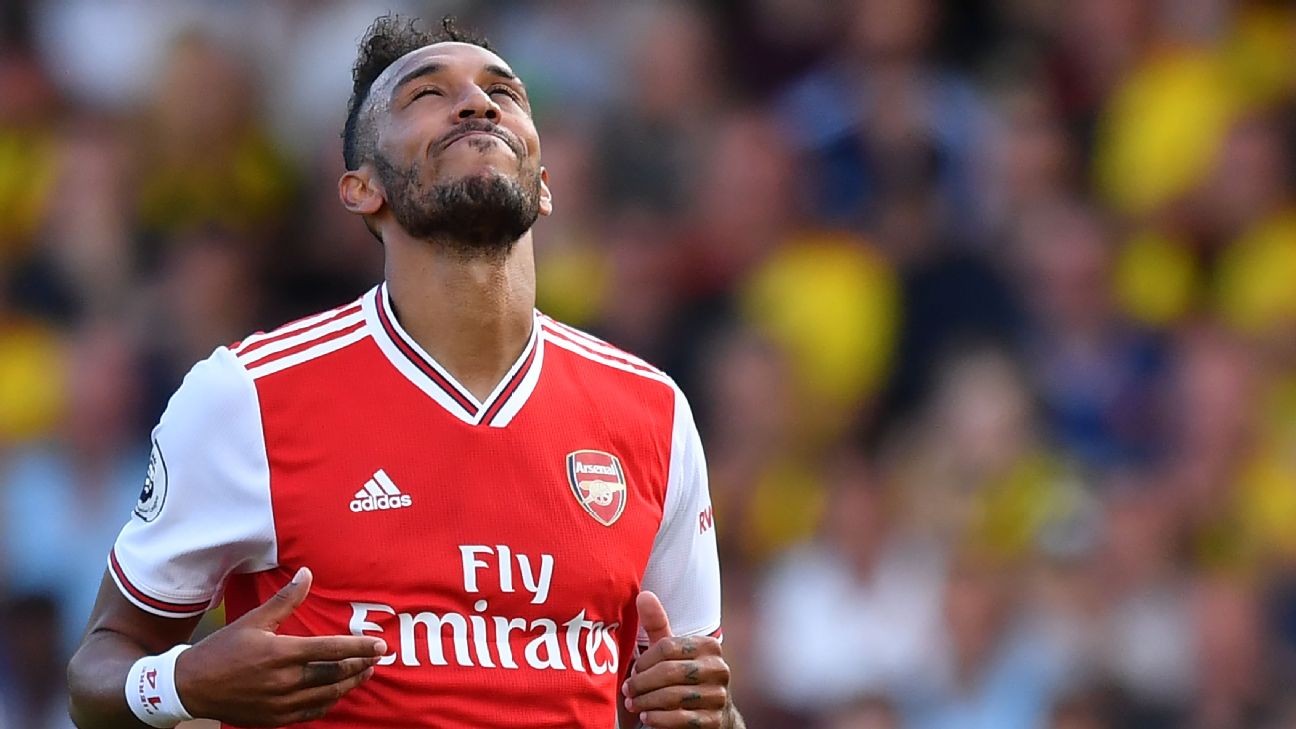 Arsenal have had issues keeping their top stars in the Premier League in recent years and striker Pierre-Emerick Aubameyang could be the latest.

Aubameyang, 30, has a contract which expires in 2021, meaning that interested clubs are starting to circle as his future at the Emirates grows more uncertain by the day. And the Times reports that he’s not planning to talk about extending his deal while there is a cloud hanging over the job of manager Unai Emery.

As a result, the Gabon international is now on the list of strikers being considered to replace Luis Suarez at Barcelona, with Real Madrid also interested according to the Daily Star. But if he goes, at least we’ll know for certain that the Gunners’ captain curse is real.

Meanwhile, the Mail reports that Wolves manager Nuno Espirito Santo is being lined up to take over from Emery, should the Spaniard be sacked after the club’s poor run of results. So it could be all-change at the Emirates soon.

The Croatia international has long been linked with a move to Juve but, despite having seen his playing time decrease at Barca this season, Paratici ruled out a winter move.

09.07 GMT: Peterborough’s speedy youngster Ricky-Jade Jones is being linked with Man United, Tottenham and Liverpool in the Daily Mail.

The 17-year-old is also attracting attention from Arsenal, Manchester City and Leicester City, while Southampton and Burnley watched him make his league debut this weekend.

Tottenham have reportedly already been knocked back with a £2m bid, but the race continues.

08.29 GMT: Sporting Lisbon captain Bruno Fernandes has signed a new contract with the Portuguese outfit, the club have announced.

No information has been given on the new contract but it’s reported that it will improve his wages and increase his release clause that was set at €100m.

The Portugal international, who has been linked with moves to Manchester United and Tottenham this summer, said on the club’s website: “For me it’s an honour and a reward for my work. It means I’m doing things well. I’m trying to do the best for me and for the club. I’m very happy to represent this club on and off the pitch. For me it will be always be a privilege to wear the Sporting jersey.”

Fernandes was named on the 50-player shortlist for UEFA’s Team of the Year.

“It’s an honour to be among the best,” he said. “To be associated with great players like Cristiano Ronaldo and Bernardo Silva.”

🗣️ “It is with enormous pleasure that I will keep on playing with this shirt” @B_Fernandes8 ✍️#SportingCP pic.twitter.com/dMMeOFLs2z

08.00 GMT: Zlatan Ibrahimovic has been announced as part-owner of Swedish club Hammarby, the club confirmed on Wednesday.

“Hammarby is a fantastic club with passionate supporters and has great respect in both Stockholm and Sweden,” Ibrahimovic said. “I have always liked the club and the fans. I am impressed with what the club has done in recent years, both on and off the pitch. Being able to join and develop Hammarby forward feels both fun and exciting.”

On Tuesday, he tweeted a picture of a Hammarby shirt with his name on the back. However, neither the 38-year-old striker nor the club have yet confirmed if he will register for them as a player.

Hammarby chairman Richard von Yxkull said: “To get a person like Zlatan into the club, with the passion and winning mentality he stands for, feels right.

“It is too early to say anything in detail about how Zlatan can contribute to Hammarby, but there is clearly very great potential in the collaboration.”

Manchester United are growing confident in their ability to win the race to sign Borussia Dortmund star Jadon Sancho, the Telegraph reports.

The teenage sensation has been turning heads since his move to the Bundesliga in 2017, with last season marking his arrival to the main stage with a series of top clubs showcasing their interest in him. Those clubs include Real Madrid, Barcelona and reigning European champions Liverpool.

Manchester City, Paris Saint-Germain and Arsenal are all on the outskirts of the conversation involving the 19-year-old Sancho, but it still appears as if the finances of the Red Devils could prove crucial in any potential negotiations.

In the 2018-2019 season, Sancho scored 13 goals and set up 19 in 43 appearances for Dortmund, while he also debuted for England and has since made 11 international appearances, finding the net twice.

He has been rated at around €100 million by Dortmund and the club have said they do not believe the player will stay at the Westfalenstadion forever.

Calciomercato writes that Real Madrid are ready and willing to sell Mariano Diaz, but a potential destination for the forward could now be in jeopardy.

The once-capped Dominican Republic international hasn’t quite been able to catch fire at the Santiago Bernabeu, with the reports indicating that he’s no longer in the plans of manager Zinedine Zidane. One club that had been interested was AC Milan, but now it seems as if the price of the deal could lead to them pulling out.

Madrid want at least €6m in order to agree to a sale, and with his contract not expiring until 2023, Milan would have to really dig deep in order to summon up the courage to make something happen.

Piatek to stay in Milan?

Krzysztof Piatek could be set for a remarkable U-turn that would see him remain at AC Milan, according to Calciomercato.

At one stage it seemed as if he would be forced out of the club due to the rumoured arrival of Zlatan Ibrahimovic, but sources close to him indicate that Piatek would prefer to stay until the end of the season in order to fight for his place in the starting XI.

Piatek’s future seemed set to feature some form of loan move away during the January transfer window, and yet all of a sudden, there seems to be renewed confidence in his ability to turn things around.

– Everton aren’t interested in the idea of selling Moise Kean during the January transfer window, Calciomercato reports. The former Juventus man had been linked with a switch to AC Milan, but the Toffees have decided that they don’t want to give up on the youngster just yet.

– Napoli are preparing to put forward a notable bid for Hellas Verona sensation Sofyan Amrabat, according to Sky Sport Italia. The club have been impressed with his performances as of late, and while it’s still early days, they’re reportedly willing to pay around €10m in order to bring him to Naples as their push to get back into the top-four race continues.