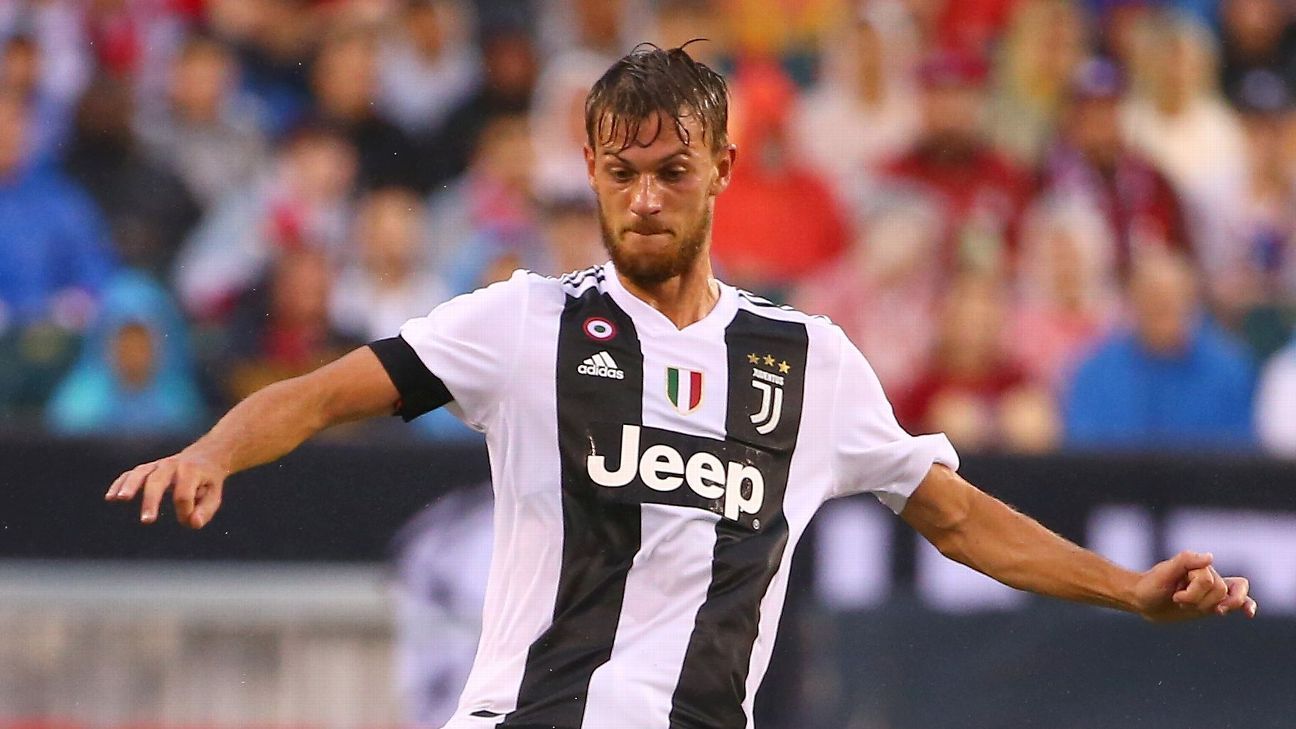 Liverpool may have a world-class attack but now they’re looking to build up their defence with the €23m signing of out-of-favour Juventus defender Daniele Rugani, according to Calciomercato.

Rugani, 25, has been unable to find regular game time in Turin after the club signed Matthijs de Ligt for €75m from Ajax this summer and is now looking to move on.

Arsenal were reportedly keen in the summer but opted to sign William Saliba instead, while AC Milan are also looking at a move which would pair the Italian with fellow countryman Alessio Romagnoli.

However, Liverpool could offer the defender the best option as he would get to play alongside Virgil van Dijk and would feel confident of keeping Joel Matip, Joe Gomez or Dejan Lovren out of the XI. Gomez and Lovren have even been linked with exits this week, so Rugani could slot in seamlessly.

16.30 GMT: Noussair Mazraoui has found less game time at Ajax this season, which means Roma, Valencia, Leicester City and Tottenham have emerged as contenders for his signature in the Italian press.

A good right-back is hard to find but Mazraoui, 21, is one of the hottest prospects in Europe so shouldn’t have too much trouble finding a new club if he does move on.

15.22 GMT: Chelsea boss Frank Lampard turned down offers for centre back Kurt Zouma last summer, according to the Daily Mail.

Lampard reportedly said that the defender has been in “fantastic” form this season when justifying his refusal to let the defender go in the summer transfer window.

Zouma spent last season on loan at Everton but has been able to carve out a place in the Chelsea team this season as he looks to start for a sixth-consecutive game against Manchester United in the Carabao Cup on Wednesday.

14.23 GMT: LA Galaxy general manager Dennis te Kloese has said that he plans to meet with Zlatan Ibrahimovic to discuss the striker’s future at the club.

Ibrahimovic, whose contract expires at the end of 2019, made disparaging comments about Major League Soccer throughout the season, fuelling rumours that he would be leaving at the end of his current deal.

Te Kloese refused to shut the door on Ibrahimovic staying at the club, telling ESPN Deportes: “My deal with him, and I have known him for a long time, is to sit down with him after things have calmed down postseason and evaluate what is good for him, his family, his fitness and for us as well.”

“He is a very mature athlete in that sense and so we will first and foremost be speaking like adults and after that we will determine what is the best for all parties involved.”

Verratti, 26, had been in talks with the club over a new contract for several months, but the Italian international has reportedly now penned a new long-term deal.

Verratti has made 290 appearances in all competitions for PSG, scoring nine goals and registering 48 assists.

13.36 GMT: LA Galaxy striker Zlatan Ibrahimovic will be a free agent at the end of 2019, but where will he go?

12.45 GMT: Calciomercato reports that AC Milan could be a possible destination for Serge Aurier in January.

The Tottenham right-back was linked with a move away from Spurs in the summer but ended up staying.

12.00 GMT: Barcelona are not contemplating letting Arturo Vidal leave in January but are open to offers of €25-€30 million for Ivan Rakitic, various sources have told ESPN FC.

Inter Milan have expressed an interest in both players in recent months, although Barca have made it clear they do not want to lose Vidal midseason. The Chile international plays an important role in the squad and, even though he doesn’t start every week, the Spanish champions feel he will be needed as the season progresses.

The England international has been rated in the €100 million plus category by the club as Dortmund hope to build on their business model of buying young and selling high.

With the 19-year-old expected to leave the Westfalenstadion next summer, Dortmund have scouted former Manchester City academy winger turned Hertha Berlin star Javairo Dilrosun, 21, and Valencia youngster Ferran Torres, 19, who is set to enter the final 12 months of his deal next summer and could be available for a cut price.

10.20 GMT: Jose Mourinho would be interested in the Arsenal manager’s job if it became available, sources have told ESPN FC.

Mourinho is based in London after being sacked by Manchester United almost a year ago.

The 56-year-old, who has also been linked with a return to Real Madrid, has been working as a pundit but has made no secret of his desire to return to management.

Sources have told ESPN FC that the chance to win trophies with three Premier League clubs would appeal to Mourinho, who won three titles with Chelsea, but he would need assurances from the board that funds were available to allow a serious challenge at silverware.

The Brazil international replied to a post on Instagram effectively ending rumours about a potential move to the German champions.

08.00 GMT: No decision has been taken at the moment by Arsenal and manager Unai Emery over keeping Granit Xhaka as the club’s captain following his row with supporters on Sunday, sources have told ESPNFC. Xhaka taunted Arsenal fans and removed his shirt when storming off the pitch after he was substituted during the side’s 2-2 draw to Crystal Palace on Sunday. The midfielder appeared to swear at his team’s own supporters, as well as waving his arms taunting supporters to jeer louder and cupping his ear.

Emery and technical director Edu Gaspar both had long discussions with the midfielder on Sunday and Monday. The Swiss international, who was off on Monday like the rest of the first-team squad, trained normally on Tuesday with his teammates but didn’t look himself at the club’s London Colney training ground. The club is fully behind him and supporting him as much as possible.

When asked whether he believes Xhaka, who has since changed his Instragram profile picture from a photo of him in an Arsenal shirt to one of him in a Switzerland kit, should apologise to club supporters, Emery said: “Yes. I think when we make individual mistakes, we need to make apologies for one circumstance, I prefer to do. We suggested to him he do it.”

Emery said that midfielder Mesut Ozil could be in line to replace Xhaka as captain against Liverpool on Wednesday, despite making just one start and two substitute appearances in the Premier League this season.

– Xhaka tantrum not most shocking thing in this picture

Man United scout ‘The Next Pirlo’

Manchester United sent scouts to watch Brescia midfielder Sandro Tonali in the newly promoted side’s Serie A match against Fiorentina, according to a report by the Sun. And they weren’t disappointed.

The report cites a club source as saying, “We have known about Tonali for 18 months, but our Italian scouts say he has gone to the next level and United need to get involved — he could be a generational talent.”

The 19-year-old known as “The Next Pirlo,” as much for his work as a deep-lying playmaker as for his luscious locks, has already drawn the attention of Inter Milan, Manchester City, Atletico Madrid and Paris Saint-Germain. So if United are to get the midfielder they desperately need, they’re going to have to beat the competition.

For a teenager who’s supposedly a generational talent reportedly valued at €50 million, that competition is going to be fierce.

For the past two years, Borussia Dortmund have tried to bring Borussia Monchengladbach midfielder Denis Zakaria to the Westfalenstadion, according to Sky Sport Germany, but have yet to be successful. In fact, just last summer, the Foals reportedly rejected a €30m bid for the 22-year-old.

Now, perhaps unsurprisingly, it’s Bayern Munich who are the domestic favourites to snap up one of the brightest young talents in the Bundesliga. But there is also interest abroad, not only from Arsenal and Manchester United, but Jurgen Klopp’s Liverpool as well.

With a contract that doesn’t expire for another two-and-a-half seasons, Zakaria remains a valuable asset to ‘Gladbach. Whoever lands the Swiss international will likely have to part with €50m for the privilege.

There is perhaps no club in world football better at taking advantage of the Bosman transfer than Juventus. Witness the arrivals of Aaron Ramsey and Adrien Rabiot this year, and Emre Can the year before. You get the picture.

So it should come as no surprise that the Bianconeri sent scouts on Tottenham’s trip to Liverpool, where they could get their eyes of Spurs playmaker Christian Eriksen, who — surprise! — is out of contract in the summer. Tuttosport reports that Eriksen could be the Italian giants’ consolation prize should they miss out on bringing Paul Pogba back to Turin.

To add further intrigue to Juve’s scouting mission, the report also states that they had their eyes on Mohamed Salah and Son Heung-Min.

– Napoli have pulled out of the race to sign FC Salzburg striker Erling Haaland, the Manchester Evening News cites Corriere dello Sport as reporting, with the Italian club expecting the 19-year-old Norwegian to sign for Manchester United in January.

– Sky Sports writes that Newcastle have begun negotiations with Ligue 1 side Strasbourg over a £10.5m deal for France U21 midfielder Ibrahima Sissoko.

– Juventus have named their price for Manchester United and Sevilla target Mario Mandzukic, according to Calciomercato, who reports that the Italian champions will not accept anything below €5.3m.