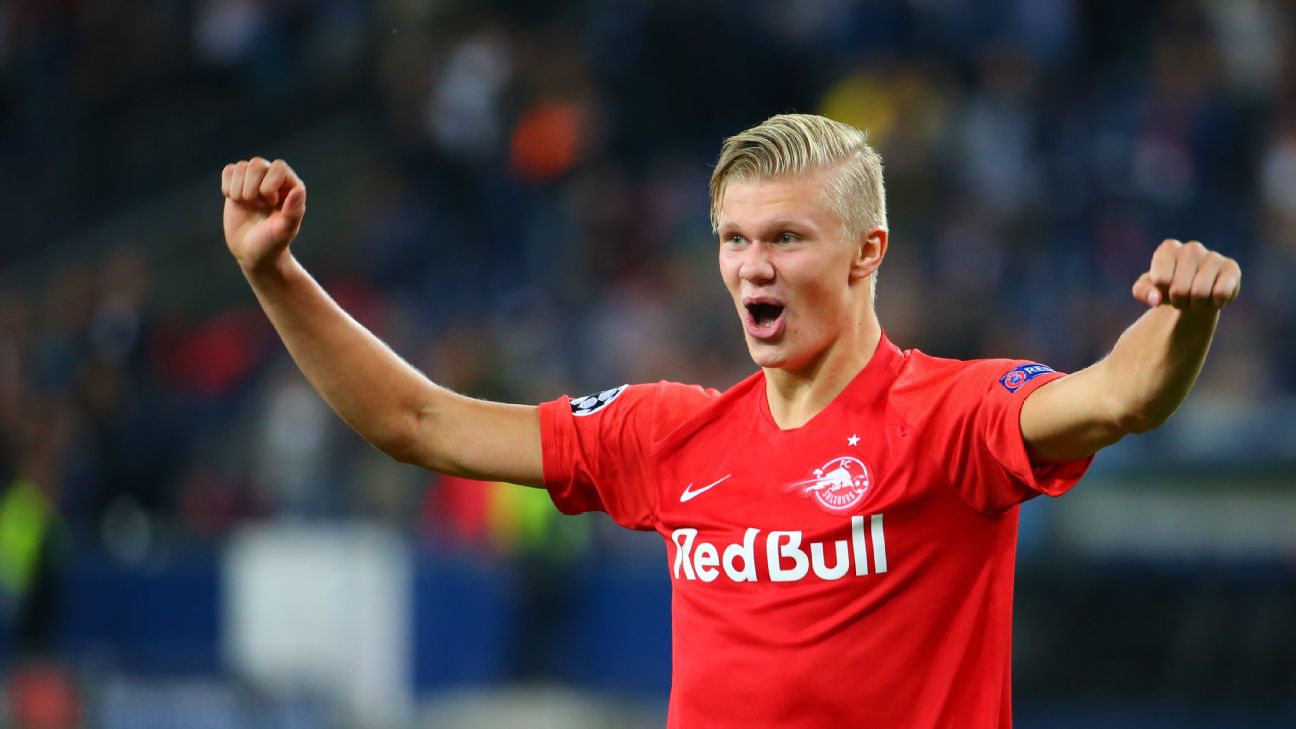 FC Salzburg star Erling Haaland has a new admirer, and it’s a familiar one to his dad, reports the Sun.

Alf-Inge played in a very different City team from 2000-03 and was probably most famous for being stamped on by Man United midfielder Roy Keane. But his 19-year-old son is now scoring goals for fun and has attracted the attention of Real Madrid, Barcelona and Manchester United, among others.

Salzburg want £50m and won’t sell in January, but City will need a replacement for Sergio Aguero soon and are monitoring the striker now.

10.33 BST: Ole Gunnar Solskjaer has said the Manchester United manager’s job is not too big for him, but admits summer decisions have “harmed” his team.

“I’ve never felt it’s too big for me,” Solskjaer told a news conference on Friday. “I’m confident in what we’re trying to do and with my staff, I’ve been so impressed.

“We have a plan and we have made some decisions in the short term that we knew would harm us but in the long term would benefit us, and that’s part of the plan.”

09.41 BST: Liverpool have options now and midfielder Adam Lallana isn’t getting much of a look-in.

Football Insider reports that the 31-year-old will move on in the summer if he can’t make an impression this season, with his former club Southampton likely to be keen.

08.46 BST: Arsenal fans can have a proper giggle over news that Man United were tracking Wojciech Szczesny amid the David De Gea contract saga.

Goal reports that United asked about the Juventus goalkeeper’s availability, but it went no further when DDG signed new terms. We wonder if they would have let him smoke at Old Trafford.

08.00 BST: Nemanja Matic isn’t enjoying life at Man United much these days as the 31-year-old midfielder has had to settle for a place on the bench behind young players like Scott McTominay.

So naturally he’s being linked with a move and naturally Inter Milan are interested, says the Sun, as they attempt to build an entire XI of former United flops.

During a recent interview with Sky Sport Italia, Napoli chairman Aurelio De Laurentiis confirmed that the club would listen to offers for star defender Kalidou Koulibaly.

The Senegal international has been turning heads on the European stage for a few years now, with Premier League side Manchester United being one of the clubs most interested in acquiring his services. After managing to hold onto him this past summer, it seems as if the time has finally come for them to listen to offers.

“I loved Koulibaly the man so I refused €105 million, but a time will come when I’ll have to sell him. Whoever says we didn’t improve our defence is wrong,” De Laurentiis said.

Why did Pogba meet with Zidane?

Pogba has been heavily linked with a move away from the Red Devils over the past year or so, with Real Madrid believed to be one of the leading contenders in the race for his signature alongside his former club Juventus.

The Frenchman has been in Dubai recovering from an ankle injury, and during his time in the Middle East, the World Cup winner met with Zidane, who was in the area for a conference. The Real boss, who is on the record as saying he wants Pogba at the Bernabeu, attempted to sign him this past summer but United made it clear that he wasn’t for sale.

– Juventus forward Paulo Dybala is ready to renew his contract with the club, Calciomercato reports. The 25-year-old was heavily linked with potential moves to both Tottenham and Manchester United this past summer, but neither came to fruition. Now, the Argentine is prepared to extend his current deal, which was set to run through until 2022.

– More from Calciomercato, which reports that Turkish side Besiktas are interested in the possibility of signing Leicester City forward Kelechi Iheanacho. The former Manchester City star was once considered to be one of the most exciting strikers in the Premier League, but now the youngster needs to reignite his goal-scoring touch — and a move abroad could help to facilitate that.

– Italian champions Juventus will go all-in on trying to secure new contracts for two members of the first-team squad this January, says Calciomercato. Blaise Matuidi and Juan Cuadrado will both see their current deals expire during next year’s summer transfer window, with Juve planning to avoid any dramatic last-minute showdowns over terms at the end of the season.