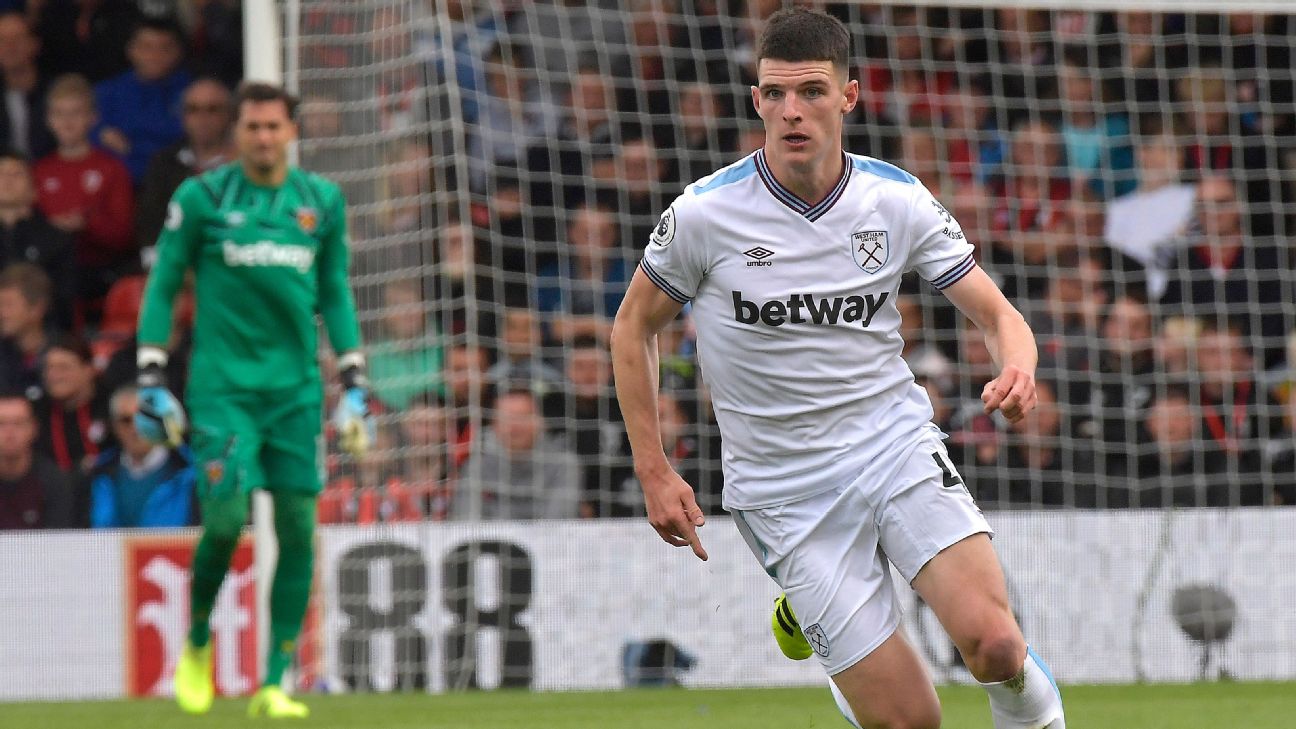 West Ham have set their asking price for the young English midfielder Declan Rice – according to The Daily Express.

Rice, whose immediate future has been the subject of much speculation, could well be headed for Manchester, if either United or City are willing to meet the London clubs asking price of £100 million — a British record fee.

Rice, 20, has represented England five times, and has caught this eye this season for the Hammers, playing in all of their Premier League games this season.

West Ham climbed to third place following their draw with Bournemouth on Saturday, and Rice has been integral to their strong start to the season.

10.50 BST: Wolves could make a £20m move for Real Madrid youngster Martin Odegaard in January, according to the Mirror.

Odegaard, 20, has made an impressive start to the season on loan at Real Sociedad but could be allowed to leave on a permanent deal.

10.00 BST: Arsenal striker Pierre-Emerick Aubameyang has told Sky Sports he plans to stay at Arsenal for years to come after being linked with a move to Manchester United in the summer.

Arsenal face United at Old Trafford on Monday, with Aubameyang looking to add to his tally of six goals in six Premier League games already this season.

The Gabon international was reportedly a £70m target for United in the last transfer window, but he has stayed at Arsenal and insists he is happy there.

“I feel that we can change something in this club and we will try,” he said. “Now it’s time to win trophies. I’m sure we can do it and I am honestly happy to be here.

“I feel very good. For the next few years we want to play at a high level and win trophies. That’s what we are talking about.”

Highly sought-after Brescia midfielder Sandro Tonali is the subject of interest from Borussia Dortmund, Calciomrerato reports. Tonali, 19, has been likened to compatriot Andrea Pirlo for his passing range and composure on the ball, but if reports are to be believed, the young Italian could have a decision to make at the beginning of the next transfer window.

Meanwhile, Gazzetta Dello Sport are touting Juventus as Tonali’s most likely destination. Tonali has represented his country at under-21 level. Juve are thought to be one of a number of Italian sides keen on the promising midfielder, who made his Serie A debut last month.

Tonali has been in fine form for Brescia in this, his first season in the senior squad, which has caught the interest of clubs all over Europe.

AC Milan could be set to spend big in the January transfer market, with Calciomercato reporting that the Serie A giants want to bring in South American stars Rodrigo De Paul and Taison.

Milan have got off to a worrying start in the league this season, with three defeats from their first five games, but the signing of Udinese’s Argentine midfielder De Paul, and Shakhtar Donetsk’s Brazilian forward Taison, could add some much needed star quality to the San Siro side’s reserves.

Milan’s situation is made worse by city rivals Inter’s electric start to the season. Under Antonio Conte, Inter have made their best start for 30 years and remain perfect after Saturday’s win over Sampdoria.

- Bruno Fernandes may fancy a move this January after recent developments. The Manchester United and Tottenham transfer target is back in the headlines, after an explosive rant, aimed at his Sporting Lisbon teammates, was leaked to the media. Fernandes, who the Daily Mirror claims had agreed terms with Spurs this summer, blasted his club mates after the side slumped to a defeat on Monday night. The developments could alert both Spurs and United.

- Paul Pogba is set to ask for as much as £600,000 per week in order to remain at Man United, according to Tuttosport. The Italian publication claims that with the likes of Real Madrid and Juve waiting to pounce, United could convince Pogba into staying at Old Trafford for a staggering salary increase. A contract renewal at United could scupper Zinedine Zidane’s attempts to bring the France international to Real Madrid in January, as has been widely reported.

– Former Japan international Keisuke Honda took to Twitter to make an appeal to Manchester United boss Ole Gunnar Solskjaer, announcing his desire to play for the Norwegian at the Theatre of Dreams. The 33-year-old, who has played for the likes of CSKA Moscow and AC Milan, wrote on the social media site: ”Give me an offer. I don’t need money but I need to play with great team and great team mate! @ManUtd.”