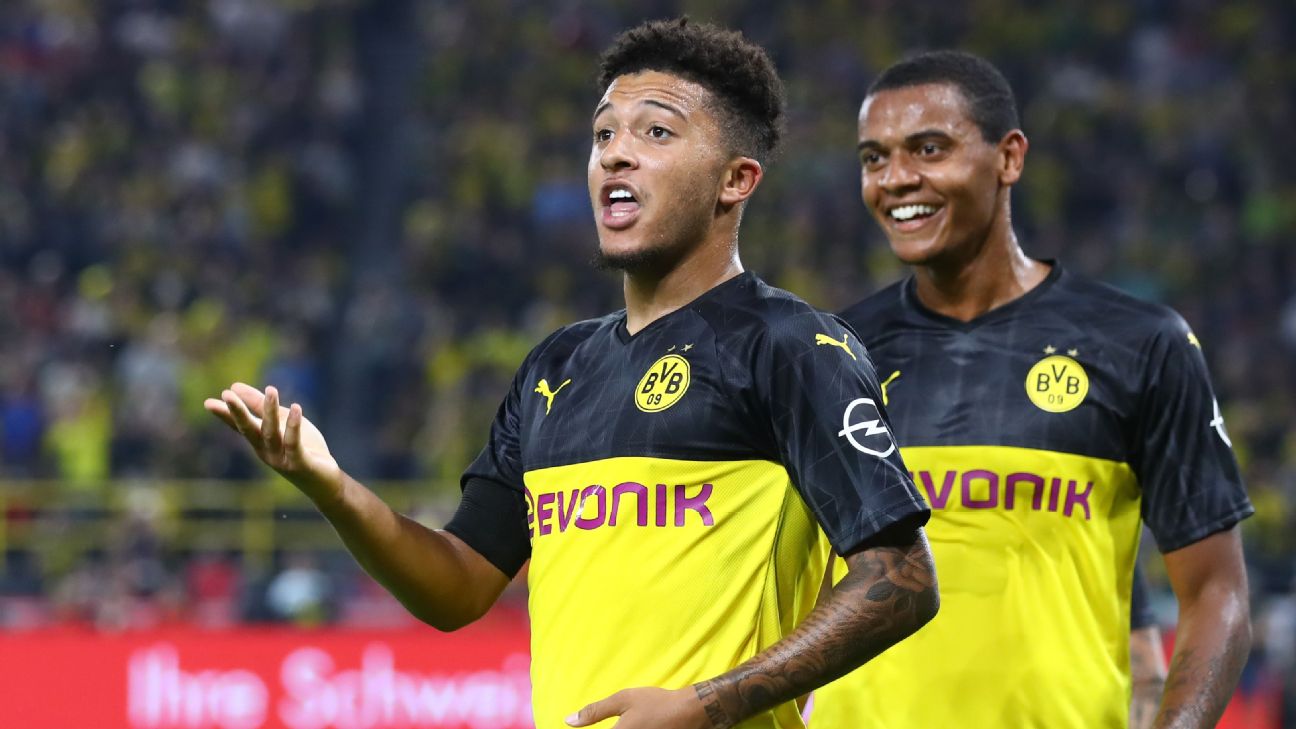 The young Englishman is reportedly valued at around £100 million if not more, with Dortmund being eager to keep hold of him for as long as they possibly can. United, on the other hand, aren’t afraid to dive into their pocket in order to get a deal done.

Sancho has been linked with a switch to Old Trafford as far back as the recent summer transfer window, as his star continues to rise.

The 19-year-old left Manchester City two years ago in search of first-team opportunities at one of Europe’s major clubs, and has since scored 18 goals for Dortmund and netted his first senior internationals goals earlier this season with a brace against Kosovo.

10.40 GMT: In further Real Madrid news, talkSPORT has reported that Los Blancos are eyeing another swap deal, with this one seeing Gareth Bale depart and Paul Pogba arrive.

Both midfielder Pogba and winger Bale are out with injuries at the moment, but have been rumoured to be on the way out of their respective clubs for some time.

09.55 GMT: Real Madrid are ready to offer €20m and Isco in exchange for Napoli’s Fabian Ruiz, according to Mundo Deportivo.

The midfielder, whom Napoli signed from Real Betis last year, is reportedly a target of Madrid, Barca and Manchester City.

Napoli are said to be opposed to any swap deals, however, preferring a larger transfer fee for the Spain international.

Whether or not Barcelona would let the Chile international leave is unclear, with the La Liga champions already seemingly set to show Rakitic the door.

If Conte can’t pry Vidal from Barca, he will reportedly look to sign Manchester United’s Nemanja Matic, who he worked with at Chelsea.

08.35 GMT: Manchester City will attach a £100m price tag to striker Gabriel Jesus amid interest from PSG and Bayern Munich, according to The Sun.

The Brazil international extended his contract with the Premier League champions until 2023 last year, though Sport Bild recently reported that he was offered to Bayern, whose forward Thomas Muller may be on the way out.

If true, Bayern’s indecisiveness may have set them back as the German champions now seem to be up against the champions of France in a fight to secure Jesus.

08.00 GMT: Arsenal manager Unai Emery has said the club has supported him in his decision to drop midfielder Mesut Ozil.

Ozil has been absent from Arsenal’s last five matchday squads, but recently said he wants to stay at the club until at least 2021.

“Here, we have one agreed strategy as a club and as a team, because the most important thing is the club, the team and finding a performance,” Emery said.

“Previously we were all speaking between us to take that decision.

“We are going to play on Sunday and in the next matches and we are going to decide, and when we can speak about him something differently we will look.”

Ozil was linked to MLS side D.C. United this summer despite his desire for game time at Arsenal.

Barcelona and Ivan Rakitic have both come to terms with his departure from the club, according to Marca.

The Croatia international has been on the verge of leaving the Camp Nou for some time now, but a deal never seemed to materialise. The club now has seven first-team midfielders on the books, leading to a lack of opportunities for Rakitic.

Ernesto Valverde is looking towards the January transfer window as the veteran’s proposed exit after five years of service.

Steve Bruce has struggled to field a dependable right-back in Newcastle’s defence this season, so as the January transfer window approaches, that’s one area the club are looking to strengthen.

One name who fits the bill, according to the Sun, is Chelsea’s Reece James. The heir apparent to Cesar Azpilicueta has struggled for minutes this season, so the Magpies are hopeful a six-month loan could appeal to both the club and the 19-year-old.

Chelsea, however, are keen to keep the England U20 international in West London.

– Manchester City are on the verge of bringing Kai Rooney, the son for Manchester United legend Wayne, back to the club’s academy, the Express reports. Kai previously moved to City from Manchester United back in 2016, but following his time in the United States with the Bethestar Soccer Club, he’s edging closer to completing a return.

– The return of successful loanees like Sergio Reguilon, Martin Odegaard, Achraf Hakimi, Takefusa Kubo and Dani Ceballos will allow Real Madrid to pinch enough pennies to spend a massive €300m on Paris Saint-Germain forward Kylian Mbappe, according to AS.