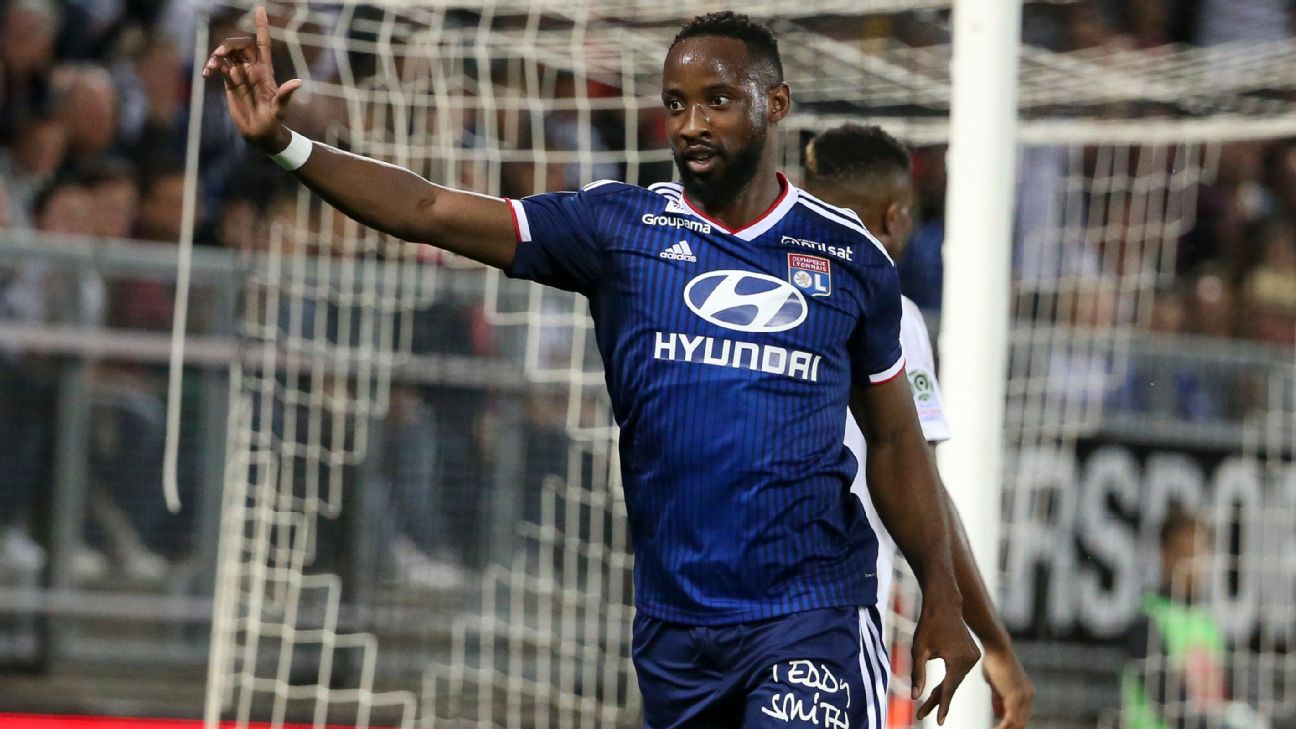 Manchester United are starved of goals, and it’s really beginning to hurt them. With Romelu Lukaku‘s goals shipped off to Inter Milan and only a completely out-of-sorts Marcus Rashford to lead the line, they have not scored two goals in a game since thrashing Chelsea 4-0 on the opening weekend of the season.

United are surely going to have to enter the market in January. And it looks like former Fulham and Celtic striker Moussa Dembele, now at Lyon, could be at the top of the hit list.

Dembele, 23, has scored six goals in Ligue 1 this season, after netting 15 last term, and was linked with a move to Old Trafford at the start of the summer.

According to the Daily Mail, United sent scouts to watch the striker in action for Lyon against Saint Etienne on Sunday…. though they would not have seen much of him as he was only named among the substitutes.

“It is always good to have big clubs keeping their eye on me,” he said of the links following Angers’ 4-0 defeat to PSG. “However, I am focused on Angers.

“I have always been very happy to wear my formative club’s colours. I am doing very well with Angers and I will continue this adventure with them. Sure, PSG are a big club, but I am still young. I have time ahead of me. I am very good with Angers and my club is my priority.”

10.25 BST: Manchester United will tell Inter Milan to cough up £25 million in order to land Alexis Sanchez next summer, according to The Sun.

Sanchez is on loan at Inter for the season, and the report claims United have no desire to have him back at the end of the campaign.

09.30 BST: Real Madrid are said to be ready to rival Juventus to try and prise N’Golo Kante away from Chelsea, according to Sport. Zinedine Zidane is said to be a big admirer, and could be ready to table an offer of £70m to land the France international.

PAPER ROUND: Inter won’t get Milinkovic-Savic … yet

Inter Milan will not be snapping up Sergej Milinkovic-Savic in January, which might be the only piece of good news Manchester United have had in a far old while. The 24-year-old midfielder has been linked with the Red Devils for some time, and reportedly agreed personal terms with Juventus last summer, but a deal never materialised.

Calciomercato writes that the Serbia international is set to sign a new deal with Lazio, which will ward off potential suitors for the time being. The Spanish-born midfielder arrived in Rome from Belgium club Genk in 2015 and has gradually established himself as one of the Biancocelesti’s standout performers.

Manchester United identified Milinkovic-Savic as a potential replacement for Paul Pogba, whose representatives looked in every nook and cranny of Old Trafford for the exit, but couldn’t find it. The Serb is valued at a fee approaching £90 million, and Calciomercato suggests that Inter could come in for him next summer.

Howe not worried about Wilson being cherry picked

Eddie Howe isn’t losing too much sleep over the persistent rumours swirling around the future of Bournemouth forward Callum Wilson.

Speaking before the Cherries’ fixture at Arsenal on Sunday, the affable Bournemouth gaffer was asked what he thought about the apparent interest in Wilson from the likes of Manchester United.

TalkSPORT reports that Howe isn’t too bothered, particularly given the time of year that this gossip is taking place.

“To hear transfer rumours circulating now the window is shut and far from opening, for me it’s pointless talking about it,” he said.

Mind you, it’s little wonder that Wilson is on an increasing number of radars. Last season he scored 14 goals and contributed 10 assists in 30 top-flight appearances for the south coast club. Given Manchester United’s impotence in front of goal, those stats make for remarkably good reading.

– Napoli have tentatively opened negotiations with Brazilian star Allan over a potential contract renewal. Calciomercato cites Corriere dello Sport as reporting that the summer interest in the player from Paris Saint-Germain has prompted Napoli to start talking to the player over a bumper new deal designed to ward off the likes of any other enormous clubs that come sniffing around. The 28-year-old midfielder, who has eight caps for Brazil, has been little short of a revelation in Naples since arriving at the club from Udinese in 2015.

– Mauro Icardi is on loan at PSG from Inter, but his long-term future appears far from certain. Calciomercato cites Gazzetta dello Sport as reporting that the French side are still undecided as to whether to make Icardi’s deal permanent, which could once again spark interest in the Argentine from Juventus. The Bianconeri have been consistently linked with a move for the 26-year-old, with the arrival of Romelu Lukaku this summer effectively signalling the end of his time at the San Siro. The ball is in PSG’s court.