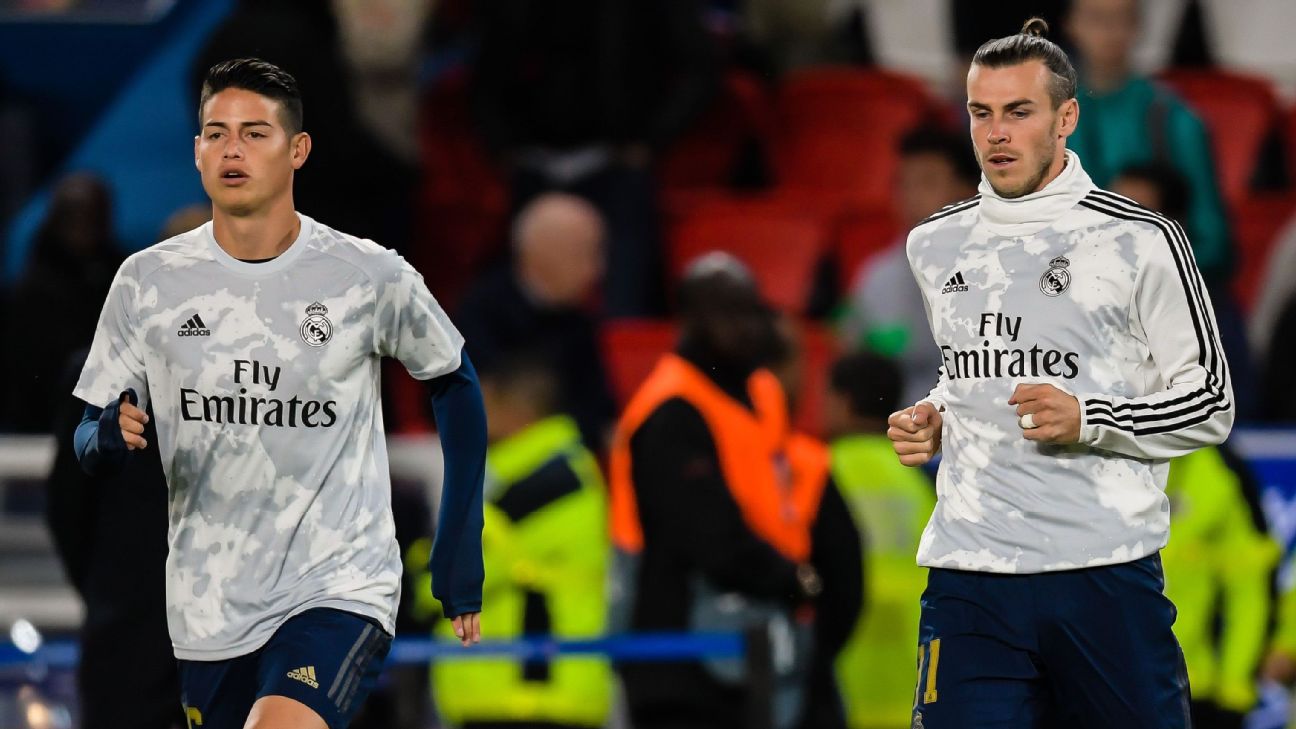 It could be a busy January at the Bernabeu, as Real Madrid look to balance their books to comply with Financial Fair Play regulations.

The Spanish giants splashed enormous sums in the summer, bringing the likes of Eden Hazard, Luka Jovic and Ferland Mendy to the capital. And although they made almost a third of it back through player sales, there is still a sizeable hole that needs to be filled.

It’s little surprise, then, that Marca is claiming that they need to go on a selling spree to replenish their funds. The paper speculates that Real Madrid may need to make an eye-watering €200 million worth of sales to avoid any FFP penalties from UEFA. Which will naturally put the future of players like Gareth Bale and James Rodriguez under fresh scrutiny.

All they have to do now is find some clubs willing to part with astronomical sums to take them off their hands. And fast.

18.16 GMT: Aston Villa could make a move for Chelsea forward Pedro in the January transfer window, the Daily Telegraph reports.

Pedro, 32, is out of contract at the end of the season, and is free to open talks with foreign clubs over a summer free transfer from Jan. 1.

However, Villa could be willing to pay a fee for the former Barcelona star in order to get him in January and boost their Premier League survival hopes.

Pedro has won the Premier League, FA Cup and Europa League since joining Chelsea in 2015, scoring 42 goals for the Blues. However, he has fallen down the pecking order this season under Frank Lampard’s management, making just three appearances since the end of September.

17.04 GMT: Zlatan Ibrahimovic‘s proposed return to AC Milan is by no means a certainty and the striker may even choose to retire, his agent has said.

Ibrahimovic, 38, is a free agent following the end of his 18-month stint in Major League Soccer with LA Galaxy. Ibrahimovic won the 2010-11 Serie A title with AC Milan, having previously also been a champion in Italy with Inter Milan and Juventus, and the Swede has been linked with a return to the Rossoneri in recent weeks.

“It’s not been said that he will necessarily return to Italy,” agent Mino Raiola told Gazzetta dello Sport. “Which of the three interested clubs will he choose? Who knows, we’re all free men. “Could he retire? I’m not going to exclude anything but it is very unlikely. Ibra is still very well.”

Last week, sources told ESPN that Ibrahimovic will have to lower his wage demands or risk missing out on a move to the San Siro.

Despite various meetings between the forward’s agent, Mino Raiola, and Milan’s hierarchy, both parties are yet to agree a deal, with the financial aspects of the deal proving a stumbling block.

Mbappe, who scored what proved to be the decisive second goal for his side, was replaced by Eric Choupo-Moting in the 89th minute, and appeared to ignore Tuchel as he took his place on the bench.

Mbappe, ranked the world’s No. 3 forward in the ESPN FC 100, has been consistently linked with a move to Real Madrid. Last month, Madrid boss Zinedine Zidane spoke of his “love” for the France international.

“Kylian never wants to come off, that is normal,” Tuchel is quoted as saying in Le Parisien. “He did not want to against Nantes. It’s nothing more.

“It was the 90th minute. It was forgotten. Choupo-Moting deserves to play. He respects that it was my choice. He was not happy to come off but it is not a big deal. Neymar would normally be in this type of situation. Physically, it’s OK that he plays in a game like that.

“For Kylian, it was difficult, he was playing three against two. He stayed in the match and it was decisive. I am happy.”

Not a good look from Kylian Mbappé this afternoon as he appeared to ignore Thomas Tuchel when being substituted off. pic.twitter.com/H1nYqLEn04

13.48 GMT: Former Arsenal captain Patrick Vieira appears to have distanced himself from taking the managerial vacancy at the Gunners.

Vieira, speaking after his Nice side’s 4-1 win over Metz in Ligue 1 on Saturday, told Canal+: “You know, a club where you spent nine years never leaves you indifferent. But to be honest, I am focused on this project with OGC Nice.

“I’ve always said it and I will repeat it again: I feel really good here. It’s a really exciting project and I want to succeed in this project.”

The 19-year-old the England youth international becomes a free agent in the summer, and West Brom could decide to cash in when the winter transfer window opens rather than lose him in the summer.

Spurs and Crystal Palace are the two Premier League clubs most heavily linked with interest in the versatile defender, who has cemented his place in the Baggies’ first team in the Championship this season.

However, European heavyweights Juventus and Atletico Madrid have also been linked with interest, and a move abroad for Ferguson would see West Brom entitled to only a base level of £300,000 compensation.

11.49 GMT: Chelsea are planning a club-record £100m bid for Borussia Dortmund forward Jadon Sancho this summer, according to the Mail on Sunday.

Sancho has been consistently linked with interest from most of the Premier League’s biggest club, with Manchester United and Liverpool also watching the England international.

The 19-year-old left Manchester City to go to Germany in 2017. The Sunday Mirror reports that, although his former club have first refusal on signing him should he become available, they are not interested in triggering that clause in the sale.

Meanwhile, Dortmund chief Michael Zorc told reporters this weekend that the Bundesliga club is not planning to sell Sancho at this time.

“We’re continuing to plan with him,” Zorc said. “He’s a fundamental player for us and I do not see any scenario where he leaves us.”

Barca manager Ernesto Valverde said on Friday that the football world must get used to the idea that Messi, 32, will retire in the near future, but Bartomeu is not ready for that day just yet.

“I would like Messi to sign one more contract [extension],” Bartomeu said in an interview on Catalunya Radio, as reported by Marca. “He still has a long way to go [before retiring]. He has no problem with staying at Barcelona. I have no doubt that he will play here until he retires.

“He said that we’ll talk when the seasons go by. It’ll be over when he wants to. For his quality and for being a reference [for Barcelona], I hope I can get Messi to sign a new contract. I’ll finish, but Leo still has a long way to go. He’ll have the right to finish when he wants to finish. This is his club, the one of his life.”

09.30 GMT: Roma striker Edin Dzeko is a January target for Tottenham, according to the Sunday Mirror.

The paper reports that Spurs boss Jose Mourinho has ordered the club’s scouts to run the rule over the Bosnia & Herzegovina international with a view to bringing him in to provide back-up for Harry Kane.

Dzeko is 33, but remains one of Europe’s most consistent goal scorers having netted eight goals in 19 appearances so far in his fifth season at Roma.

He has Premier League experience, winning two league titles during his four-and-a-half years at Manchester City, for whom he once scored four goals in one match against Tottenham.

Transfer speculation has been swirling like a gale around Stamford Bridge since the West Londoners’ transfer ban was halved this week. And after their 3-1 defeat to Everton at Goodison Park on Saturday it seems as though Frank Lampard could be in the market to bring Nathan Ake back to London — although any move will depend on the form and fitness of Antonio Rudiger.

So says the Telegraph, with the paper reporting that Chelsea could be tempted to splash the cash on Ake depending on how German international shapes up on his return. If Ake does head back to the capital, it would be quite some homecoming.

Chelsea sold him to Bournemouth for £20m in 2017 and although they might have to spend double that to bring him back, they’re confident that their £40m valuation will be enough to persuade Bournemouth to let him go. Which might raise some eyebrows at Manchester City and Manchester United, who were reportedly quoted £70m for his services in the summer.

A move for Ake — just one of a number of potential transfers as Lampard eyes a kitty of £150m — would certainly fit the bill for Chelsea, who have looked vulnerable at the back in recent weeks. Not only can he play centre-back, he’s also capable of stepping into the left-back berth or performing in midfield. He is also eligible to play in the Champions League.

Which puts Rudiger under immediate pressure when he finally returns this month.

– Spurs are joining a congested field in attempting to bring Juve defender Merih Demiral to the Premier League. The Sun report that Spurs have been in touch with the players agent, with a view to potentially making him the first signing of Jose Mourinho’s reign at the club.

The Turkish international is reportedly becoming increasingly frustrated at Juventus, having fallen out of favour with Maurizio Sarri, who took over in Turin this summer. He finds himself behind Giorgio Chiellini and Matthijs de Ligt in the pecking order in Northern Italy and is apparently keen on a switch to the Premier League. All he needs to do now is choose his club.

– Could Napoli hijack Zlatan Ibrahimovic‘s move to Serie A? La Republica certainly thinks so, reporting that the Swedish great is stalling over a switch to AC Milan because Napoli have promised him a big money move should they qualify for the last 16 of the Champions League. The Partenopei need a point against KRC Genk to make it to the knockout stages — so expect Ibrahimovic to be paying more than a passing interest in their progress.