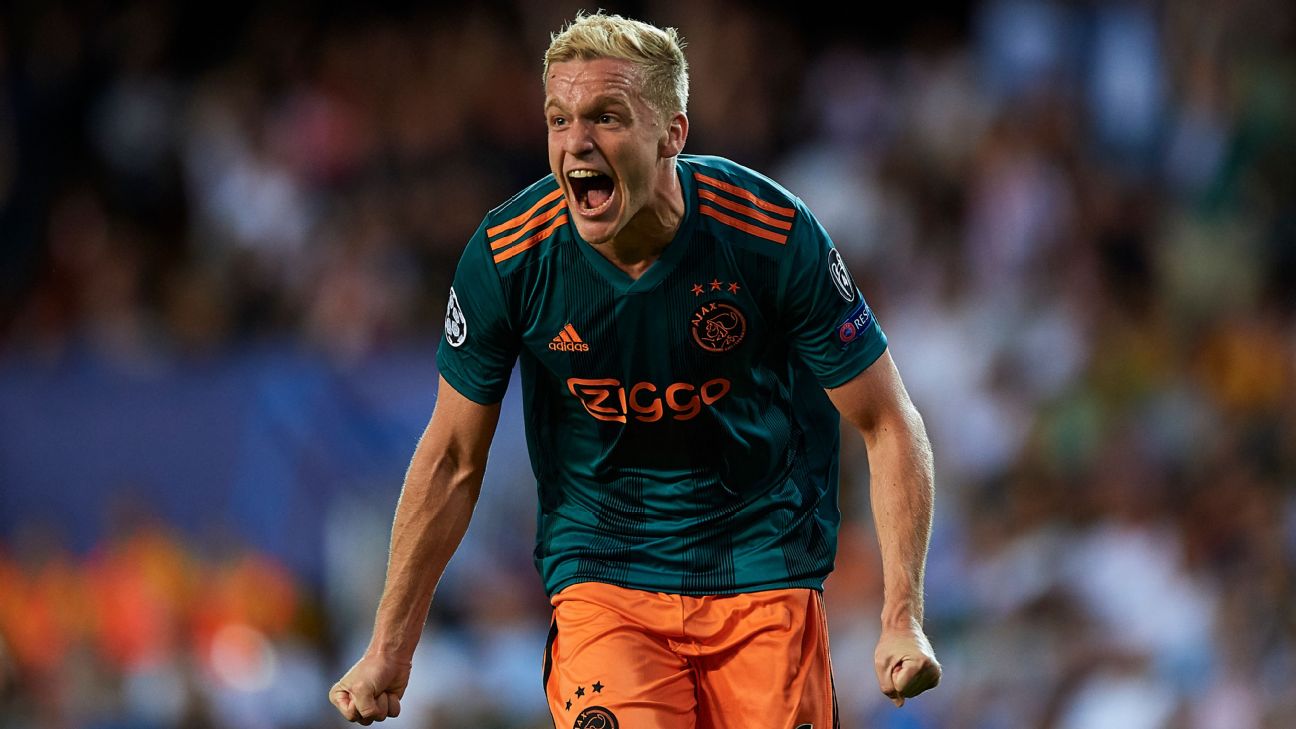 Reports in The Mirror claim Real Madrid have swept into pole position for the signing of highly rated Ajax midfielder Donny van de Beek in a deal worth around £100 million — just three months after Manchester United failed to secure a deal for around a third of the price.

The Dutch giants quoted Ole Gunnar Solskjaer’s side a price of £35m for the Netherlands international in the summer, but the Red Devils were unable to get a deal over the line, and now the midfielder’s fee has skyrocketed after interest from rival clubs intensified.

Van de Beek has emerged as one of Europe’s brightest prospects since making his Ajax bow in 2015, and scored 12 times last season as his side won the Eredivisie and reached the semifinals of the Champions League.

09.58 BST: When the England manager speaks, as a player you usually listen. So Manchester City midfielder Phil Foden will be happy that Gareth Southgate says he shouldn’t worry about going on loan just yet.

“Phil is still physically developing and I know Pep [Guardiola] recognises the quality of the player, but equally the quality of the opposition around him,” the England boss said. “So I’m sure in the coming months that game time will increase as the number of matches racks up.

“I think you should always assess those things halfway through the season and towards the end of the season to see how much football they’ve got, and then I’m sure they’ll make a decision on what’s right for him as a player.

“It isn’t always as straightforward as to go on loan because that is fraught with some difficulties as well at times with the style of play, different training regime, everything around him. But I know those discussions will be going on at Manchester City at the top.”

He does still have to play football though, Gareth… something he is not doing at the moment.

09.00 BST: Manchester United goalkeeper David De Gea is settled now he’s signed a new contract, but he has eyes on a different transfer.

Sport claims he wants to buy Spanish second division club Elche — a task that would require £16m of his hard-earned cash to make happen.

Manchester City and Chelsea are set to go head to head for the signing of Leicester City full-back Ben Chilwell, with the Sun claiming the Foxes are already on the lookout for a replacement.

Frank Lampard is a big fan of the rapid progress made by the 22-year-old since his first-team debut in 2015, and is set to launch a bid for the former Huddersfield loanee when the club’s FIFA transfer ban ends next summer.

Man City manager Pep Guardiola is also a long-term admirer of Chilwell, and is keen to secure a deal worth around £50m, although there is also set to be competition from clubs on the continent who are looking to join the race for the England international.

City looked at doing a deal for Chilwell last summer, but ultimately decided to keep faith in Ukrainian Oleksandr Zinchenko for this season at least.

Manchester United have denied claims that Paul Pogba and agent Mino Raiola are holding the club for ransom, with reports claiming the Frenchman is demanding a move to Real Madrid unless he is offered a new contract worth £600,000 a week.

Such a deal would give Pogba parity with the likes of Cristiano Ronaldo and Lionel Messi as the highest-earning footballers in the world, but United have insisted they haven’t even spoken to the World Cup winner about a new contract, and reiterated their desire to keep hold of the player.

The 26-year-old Pogba has long been admired by Real Madrid manager and compatriot Zinedine Zidane, and Zidane was reported to have prioritised the signing of the former Juventus midfielder during the summer, but a deal failed to materialise.

– Leicester City’s attempts to sign Celtic playmaker Callum McGregor are set to take a blow, with the Scottish Premier League champions preparing to offer the 26-year-old a new contract at the club. Former Bhoys manager Brendan Rodgers is reportedly keen on a January swoop for the player, according to reports in the Daily Record.

– Sheffield United are plotting a January move for Brentford forward Ollie Watkins, according to reports in the Sun. Blades boss Chris Wilder is set to launch a bid worth in the region of £15 million, with Crystal Palace also rumoured to be interested in reviving previous interest in the 23-year-old.

– Inter Milan are set to cash in on striker Gabriel “Gabigol” Barbosa following the 23-year-old’s stunning form on loan at Brazilian side Flamengo. The Nerazzurri value the player at around €30 million, with interest set to arrive from clubs in Spain, England and China, per reports at Calciomercato.