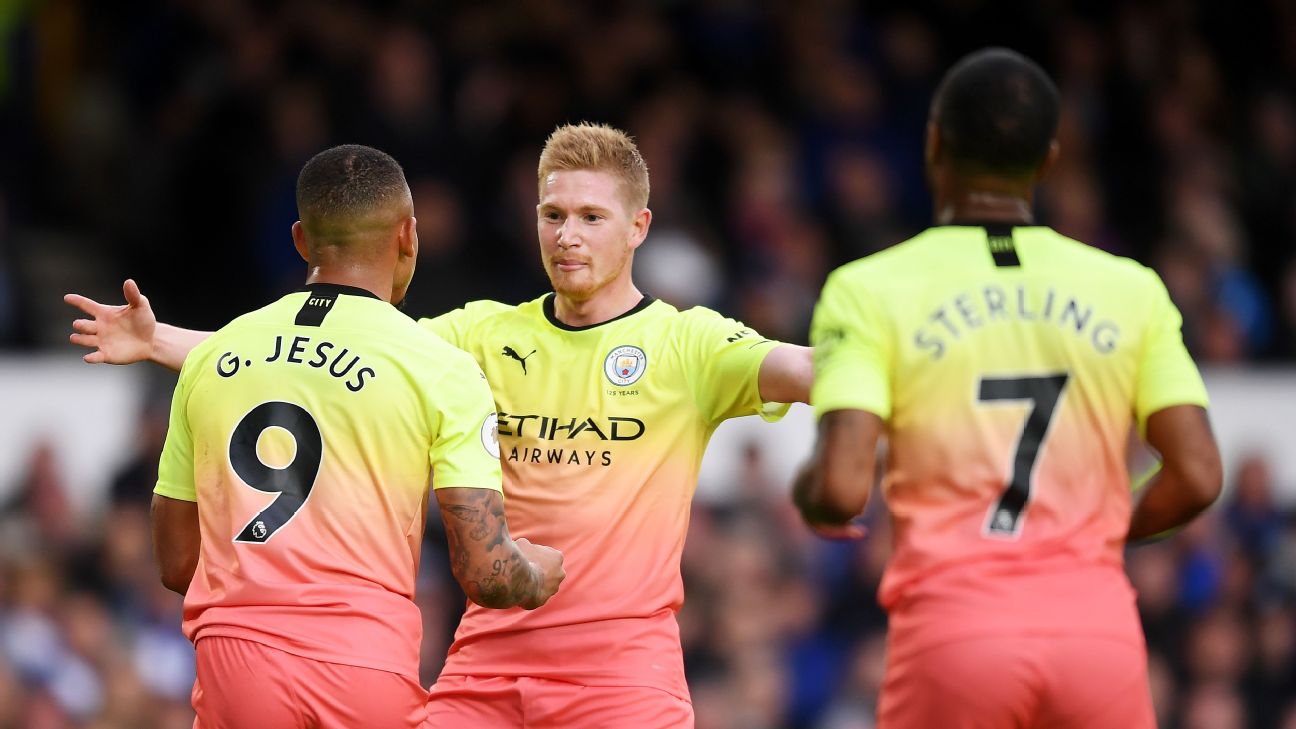 Every title race has at least one sliding-doors moment. We all remember Sergio Aguero scoring in injury time against Queens Park Rangers to win Manchester City their first Premier League title, but don’t forget City’s 6-1 over Manchester United early in the season, the “Why Always Me?” match involving Mario Balotelli. It added five goals to City’s goal differential and subtracted five from United; City won the league because of a goal-differential that was eight better than United’s. What if United had just lost by one or two?

We’ll spare Liverpool fans any discussion of “The Slip” and instead focus on another inflection point from that same year. On Boxing Day, Liverpool lost to City at the Etihad, 2-1, in a match they deserved to at least draw: they edged the hosts 1.79 to 1.53 on expected goals. Liverpool ended up finishing the season just two points behind City.

In Leicester City’s title-winning season, they drew even with Arsenal atop the table thanks to a fortunate 1-0 January win away to Tottenham in which Spurs more than doubled their shot (21 to 10) and expected goal (1.54 to 0.68) totals. Claudio Ranieri & Co. won the title by nine points, but who knows how the season would have played out had Spurs won this match and either they or Arsenal still sat in first place come mid-March.

The same goes for the following season. In Early December, Manchester City created 2.14 expected goals compared to Chelsea’s 1.39 but lost the match, 2-1, thanks in large part to Kevin De Bruyne hitting the post on an empty-net, 56th-minute tap-in that would have put City up 2-0. Had they won the match, they would have been two points clear atop the table; instead, they ended the weekend in fourth, while Chelsea had a three-point lead on everyone else that they’d never relinquish.

“All of these games were mid-season, and therefore sometimes accredited with less impact than they actually had on the title race,” said Omar Chaudhuri, head of football intelligence at the consultancy 21st Club.

And then there was last season’s 2-1 win by City over Liverpool in which John Stones cleared a ball off the line that was literally centimeters away from being a goal. City won the title by one point; if Stones is half-a-second slower to that ball — hell, if he was wearing a different pair of cleats — then Liverpool probably would have won the Premier League.

This weekend, the two teams meet for the first time in the league since that night at the Etihad and the stakes are just as high. Liverpool currently hold a six-point lead atop the table but due to City’s significantly better underlying performance — better goal difference (plus-24 to plus-16) and better xG difference (plus-20.1 to plus-11) — most projections expect that gap to shrink over the remaining 27 games. Betting markets see Liverpool edging City by one point while 21st Club’s model currently has Liverpool winning by 3.8 points. That will all change after this weekend.

“A win for City therefore would be a big swing, closing the gap to within an expected ‘future’ point, and essentially making it a 50/50 race,” said Chaudhuri. “It’s worth noting that bookmakers are more bullish on City, and would make them favourites with a win.”

In short, Liverpool or City could win the Premier League this weekend. So how will each side go about doing it and which moves seem to serve them best in their march to glory?

Liverpool lean on their talent out wide

Cheuk Hei Ho, an analyst who does a lot of work on the way teams and players pass the ball, created some beautiful visualizations for each team. The images below show the kinds of passes that Liverpool and City rely on both more often and less frequently than other teams, while the different colors are meant to group together similar passes.

As you can see, neither team spends much time passing in their own third of the field, with Liverpool’s only consistent pattern coming from balls out wide to their fantastic fullbacks, Trent Alexander-Arnold and Andy Robertson. Moving into the attacking third, most of Liverpool’s unique passing comes from right-to-left diagonals, which once again feature the fullbacks. Alexander-Arnold and his joystick of a right foot lead all Liverpool players in expected assists with 4.3; next closest is Roberto Firmino with 3.1 and then Robertson at 2.3. Alexander-Arnold also tops on the team, per data from Stats Perform, in completed passes into the penalty area with 5.7 per 90 minutes — way ahead of Sadio Mane‘s second-most tally of 2.8.

While the creative burden carried by Liverpool’s fullbacks is nothing new — TAA was first and Robertson was second on the team in assists last season — the frequency with which they pass to each other has increased. In fact, it’s become one of the team’s defining stylistic quirks: Alexander-Arnold steps on the ball, looks up and launches a cross-field ball right into Robertson’s stride to switch play and exploit any space. Per data from Cheuk Hei Ho, the number of fullback-to-fullback passes has increased over Jurgen Klopp’s tenure:

One other quirk worth noting: You’ll see that Liverpool rarely play passes from the advanced right channel into the box. Alexander-Arnold tends to bend balls in from farther back while the team’s de facto right winger is actually the team’s main target for passes into the penalty area: Mohamed Salah receives 4.6 passes in the box per 90 minutes, per Stats Perform. Firmino and Mane are second and third with 3.7 and 3.5, respectively.

For City, it’s all about De Bruyne

Pick just about any stat for attacking effectiveness and City are way ahead of anyone else in the league.

You can’t create that kind of dominance with any predictable patterns or tendencies. City are able to play the majority of matches in their opponent’s third for two main reasons: Guardiola is a master at creating attacking spacing, and their threat can come from anywhere. In terms of non-penalty expected goals+assists per 90 minutes among players with at least 400 minutes of game time, City have the four most productive attackers in the league — Sergio Aguero, Gabriel Jesus, Raheem Sterling, and Kevin De Bruyne, along with Riyad Mahrez (sixth) and Bernardo Silva (eighth). No other team has more than two players in the top 10.

However, if there’s one defining feature of City’s attack this year, it’s the sight of Kevin De Bruyne, seemingly harnessing the Earth’s rotation and whipping in a ball behind the defense from a few yards off the right corner of the penalty area. Across Europe’s Big Five leagues, De Bruyne completes more passes into the penalty area per 90 minutes than any player. And here’s how he most commonly does it:

De Bruyne leads Europe with the number of chances created per 90 minutes, and he’s also ahead of the entire pack in assists, too, with eight. After missing most of last season with an injury, the 28-year-old Belgian looks like the best player in the Premier League through the first 11 games of the year. Perhaps uncoincidentally, the two Premier League games City lost are two of the three games De Bruyne didn’t start. For the moments when City’s slick passing doesn’t break down the opposition, he’s the sledgehammer.

The same goes for shots: They’re first and second in attempts per game, and they’re first and second in fewest attempts allowed. They’re the two best pressing teams in the league; they’re also the two hardest teams to press. The one potential weak spot: although City allow by far the fewest shots per game, they’re just fourth in expected goals allowed. In other words, the few chances they do allow tend to be high-quality opportunities.

How will it play out on Sunday?

Based on what happened in the two matches between these teams last season, shots seem like they’ll be at a serious premium on Sunday. Neither side broke into double digits in either meeting in 2018-19. Despite the lack of constant goalmouth action, the game at the Etihad was still played at an incredibly high level. Every attacking breakthrough felt like a minor miracle, a multi-part equation solved while riding on the back of a motorcycle. The game at Anfield, though? Not so much.

After a succession of wild, high-scoring matches across the Premier League and Champions League the previous year, neither team really took any risks in their first meeting of 2018-19. Liverpool ended up with seven shots, City six. Possession was 49.6 to 50.4, slightly in favor of City; both teams attempted the exact same number of passes in the attacking third (108) and both teams completed the exact same number of passes into the box (10).

That said, even a bland, goal-less split amid a title race has its own sliding-doors moments. Mahrez missed a penalty in the 86th minute at Anfield in October, 2018. Had it gone on, City might have hit 100 points again and the chase for first might have ended way before the last weekend of the season.

No matter how entertaining Sunday’s match is, there’s likely to be another one of these inflection points somewhere across the 90 minutes. We just won’t know what it is until we get to May.