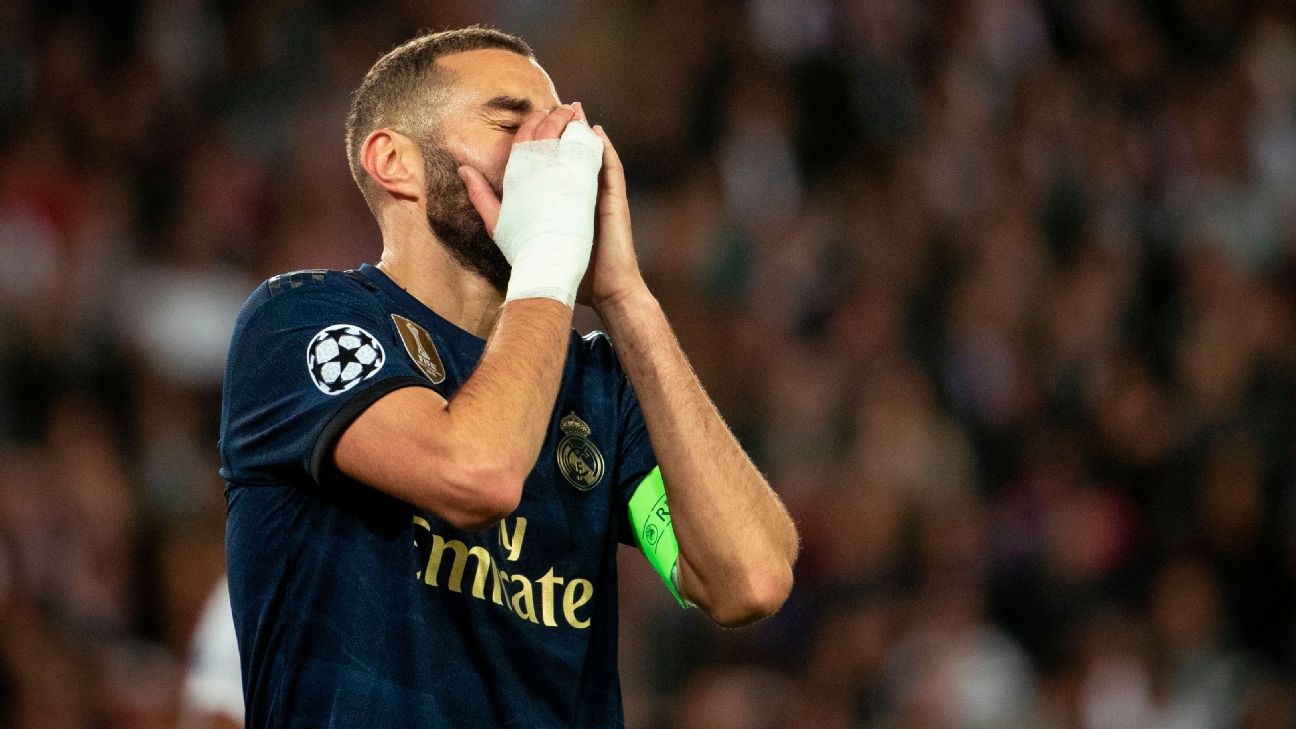 Don’t imagine that it’s merely qualification for the Champions League knockout rounds at stake for Spain’s leading clubs this week, when Real Madrid host Paris Saint-Germain, Atletico Madrid travel to Juventus, Barcelona face Borussia Dortmund at Camp Nou and Chelsea go seeking revenge in Valencia. The next 48 hours are, in fact, a huge referendum on the health — and wealth — of Spanish football.

This week’s fixtures mirror Matchday 1, when La Liga’s four clubs managed to score a measly three goals, win once and accumulate five out of a possible 12 points. While the standings in Groups A, D, F and H aren’t sufficiently critical to run around screaming “the end is nigh,” nor is the patient robustly healthy, gobbling down his porridge and bothering the nurses for a release date.

Of the four, only Barcelona lead their group. But Ernesto Valverde’s side have the second-lowest points total, the lowest goal difference of any group leader and in terms of goal totals — normally the calling card of Lionel Messi, Luis Suarez & Co. — Barca trail everyone except RB Leipzig by between five and 11 goals. It might not be pitiful, but it ain’t great — and it marks a decline.

Madrid should go through Group A, but they may well already be consigned to second place, meaning the knockout tie — against a group winner — will be home first and then the decisive match away. That’s not an outright disaster, but to be avoided, in case the draw is to an intimidating, rarely breached citadel — like Anfield, for example.

Atleti are in Turin this week to face perennial Italian champions Juve. This is the Bianconeri team that led 2-0 at the Wanda Metropolitano in September before the hosts staged a monumental comeback, including a last-minute equaliser. Regardless of whether Cristiano Ronaldo is fit, plays or is in bristling form, this remains the team that tore Diego Simeone’s side to shreds last year, eliminating them from the competition in the process.

If Juve were to repeat that pummelling of eight months ago (3-0) and if Lokomotiv were to beat Bayer Leverkusen in Moscow, then Atleti would face an all-or-nothing final group match against the Russians on Matchday 6. Okay, in the Spanish capital and with the head-to-head in their favour, but — as with Madrid — it’s a situation that would be better avoided, and would only see them through as runners-up, and thus at greater risk when the knockout-round draw comes around.

Home first and then, potentially, Manchester City or Bayern Munich away in the return leg. Obviously, those are the sorts of threats to be avoided if at all possible. The danger is a tie in which — after being bullied out of the competition in March (for the second successive year) away to a Liverpool, a Bayern or a City — even your most supportive fans, media and club directors will moan: “Well you shouldn’t have been floundering about in second place by the end of the group!”

Valencia are joker in the pack; tied on seven points with Ajax and Chelsea, third because of goals scored and goal difference, but with the head-to-head advantage over Frank Lampard’s men thanks to that surprising 1-0 win at Stamford Bridge. If Los Che lose to Chelsea, especially by more than one goal, then the advantage will disappear and, more than likely, any chance of group victory will too.

In fact, with Valencia traveling to Ajax on the last day, having already lost heavily to the Eredivisie champions at Mestalla, tripping up to Chelsea this week could be pretty disastrous for Albert Celades’ team. It could be a huge step towards elimination and merely a place in the Europa League at a time when owner Peter Lim and his board desperately need the vast riches that knockout Champions League football bring in order to service their debt and retain their star players.

But such a bleak set of threats are, hopefully, no worse than decorative scene setting. We shall see.

La Liga’s clubs, right now, are giving off the impression that not only are they not the vanguard, but that they are struggling under an onslaught of new European football standards; standards of intensity, standards of pressing, standards of coping with adversity, pace of play and top, top-quality finishing.

Last season Barcelona had an equally difficult group but romped it, won by a huge points margin and after Matchday 4 had scored seven more goals than so far this campaign. Madrid, too, strolled through what was an only slightly easier group, having scored more and conceded fewer at this stage. Like Barcelona, they are in a worse position year on year. Atleti, entering Matchday 5, had more points and more goals last season, ending up tied on 13 with Dortmund and finishing second on the head-to-head rule. Again, worse in 2019.

Only Valencia are better off today than a year ago, which is where the concept of the referendum comes in.

While I’m not predicting this outcome, it’s quite feasible that PSG draw or win at Madrid, that Dortmund take a point at Camp Nou, that Juve beat Atleti and that Chelsea win at Mestalla. If, and admittedly it’s a big if, those results came to pass, then three of Spain’s big four would be left sweating over elimination on the final matchday.

The financial referendum, as far as Barcelona, Madrid and Atleti are concerned, has already been won. UEFA’s revenue distribution this season means that those three have already earned at least €56 million, €57m and €54m, respectively. And there’s another €5.4m available to each, should the three all win their remaining two matches. Valencia, because they are further down the club coefficient ranking, have been awarded significantly less, and yet still earned nearly €44m — again, with another €5.4m automatically theirs if they beat Chelsea and then Ajax.

Getting out of their groups and reaching no further than the quarterfinals would net another minimum €20m, which, once the TV payments are divided up and added, would mean Madrid, Barcelona, Atleti and Valencia earning at least €85m, €84m, €83m and €76m, respectively. The rewards shoot up, especially the market pool of TV revenue, for making the semifinals and/or the final.

These are remarkable sums and emphasise why it’s not just getting out of the group that is utterly vital, finishing first in order to nudge the percentage chance of proceeding through the round of 16 is hugely desirable. It is at minimum a difference of €20m-€30m to your books. Prestige is ferociously important to these Patrician members of the European elite, but it’s nothing compared to hard cash given their voracious need for ever increasing revenue. This week’s European referendum may look highly enticing and enjoyable to you, the spectator, but it’s transcendentally important to Madrid, Barcelona, Atleti and Valencia.

My best guess is that Madrid beat PSG but don’t win the head to head, that Barcelona defeat Dortmund in a five-goal thriller, that Chelsea take no worse than a point at Mestalla and that Atleti, possibly, create a big shock and win in Turin. Sadly, there are no market pools, win bonuses or coefficient points for columnists.

Whether it’s watching Spain’s giants sweat, stumble or triumph — enjoy. This could be special.