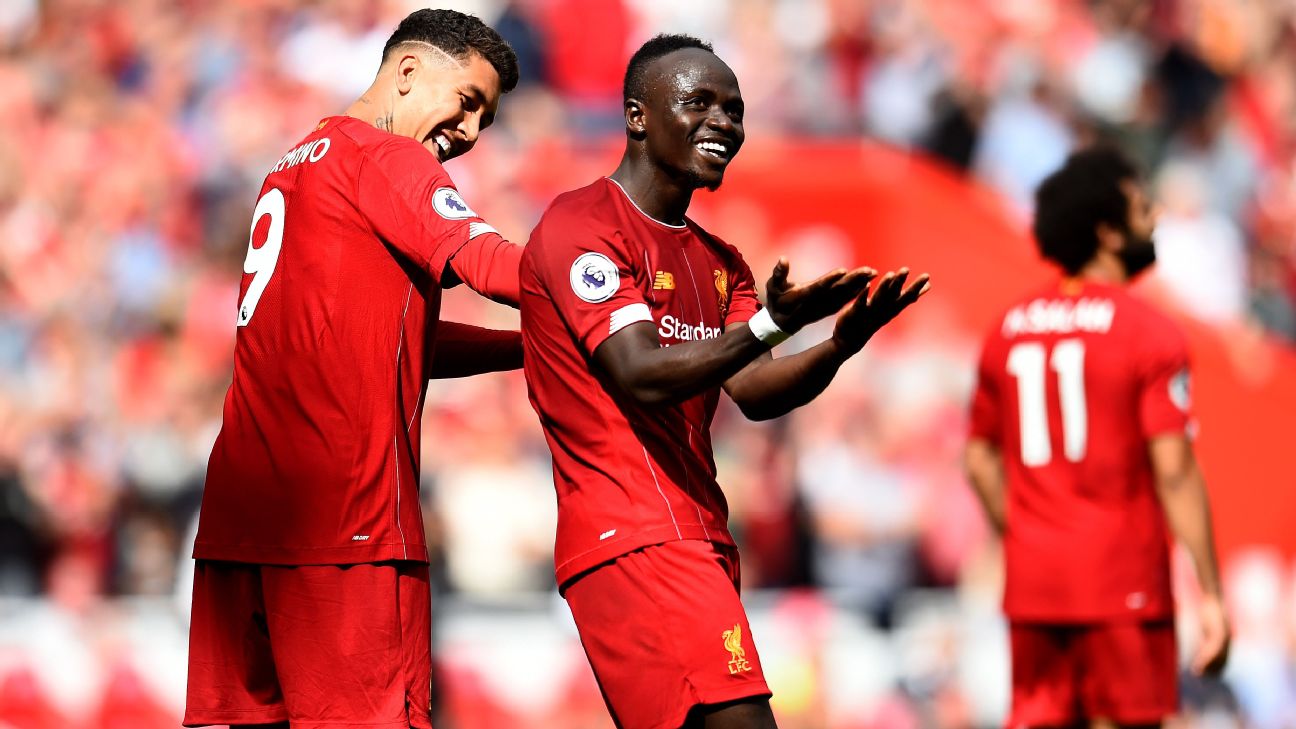 Two big questions were posed about the Premier League title race over the weekend: Can Liverpool maintain their incredible form, and just how far off the pace can Manchester City allow themselves to fall?

If the answer to the first question is “yes,” then “not much further” would seem to be the obvious response to the second after Pep Guardiola’s City slipped five points behind Liverpool following Saturday’s unexpected 3-2 defeat against Norwich at Carrow Road.

Liverpool’s start of five successive wins has sent an ominous warning to their title rivals, but not simply because they sit at the top of the table with 15 points from five games. It is because Liverpool’s form is deep-rooted. Jurgen Klopp’s team have now won 14 successive Premier League games — scoring at least twice in each of those victories — and are unbeaten at Anfield in the league since April 2017. And in the midst of that run they also became European champions for a sixth time in June when beating Tottenham in the Champions League final.

Liverpool are flying right now. Results can’t get any better, but performances might, and that will be the concern for Guardiola and City.

In Guardiola’s first season at the Etihad, City won their first 10 games in all competitions. By September 2016, City also had 15 points from five games, having scored 15 goals in those fixtures, but they ended the season in third — 15 points adrift of champions Chelsea.

Three years ago, City’s results and performances tailed off after setting a breathtaking pace early on — a 3-3 draw at Celtic in the Champions League in late September offered the first sign of the defensive frailties that would ultimately scupper their domestic ambitions — so there is plenty of time for Liverpool to suffer a similar loss of form.

But five points is already a worrying gap for City to contemplate. Last season, Liverpool amassed 97 points and only finished runners-up, so if they are on course for a similar tally this term, City’s margin for error is already down to the bare minimum.

With 10 points from five games and 99 still to play for, City could win all 33 of their remaining games and end up with 109 points, but that is simply not going to happen. Liverpool, however, know that City have won their last two titles by amassing 100 points in 2017-18 and 98 points in 2018-19, so Klopp’s players will be working on the assumption that they will need at least 98 to end the campaign as champions this time around.

It is a tall order, but if Liverpool are to achieve that, it would mean City can now drop no more than 11 points over the rest of this season to have a chance of beating Klopp’s men to the title. At their current rate, Liverpool could lose five of their remaining 33 games, win the rest and still end up with 99 points.

City have already dropped five points and have suffered injuries to key players, with centre-back Aymeric Laporte ruled out for at least six months with a knee injury and winger Leroy Sane facing even longer on the sideline with an ACL injury.

At Norwich, in the absence of Laporte, City’s defending was shambolic. Vincent Kompany‘s departure at the end of last season is another factor they have to deal with, but Guardiola knows he must find a way to tighten up at the back with just two senior centre-backs, John Stones and Nicolas Otamendi, available between now and the re-opening of the transfer window in January.

Considering that the loss at Norwich was City’s first Premier League defeat since January, it would be foolish to hit the panic button just yet. They have scored more goals than Liverpool so far (16 to 15) and conceded just two more (six to four) but Liverpool are getting the job done and overcoming setbacks such as losing goalkeeper Alisson Becker to injury and falling behind early to Newcastle on Saturday before winning 3-1.

More setbacks will follow, and how they overcome them will define Liverpool’s season. But as early as it is, they have already given themselves a cushion and turned the screw on their biggest rivals for the title.

Perhaps City are becoming victims of their own success under Guardiola. By raising the bar so high, they have forced Liverpool to get better and better in order to compete. The Reds’ only chance to win the title is to beat City at their own game when it comes to relentlessly winning and amassing points.

Time will tell if Liverpool can maintain their form, but now it’s City turn to chase a runaway leader they are discovering how tough that can be.