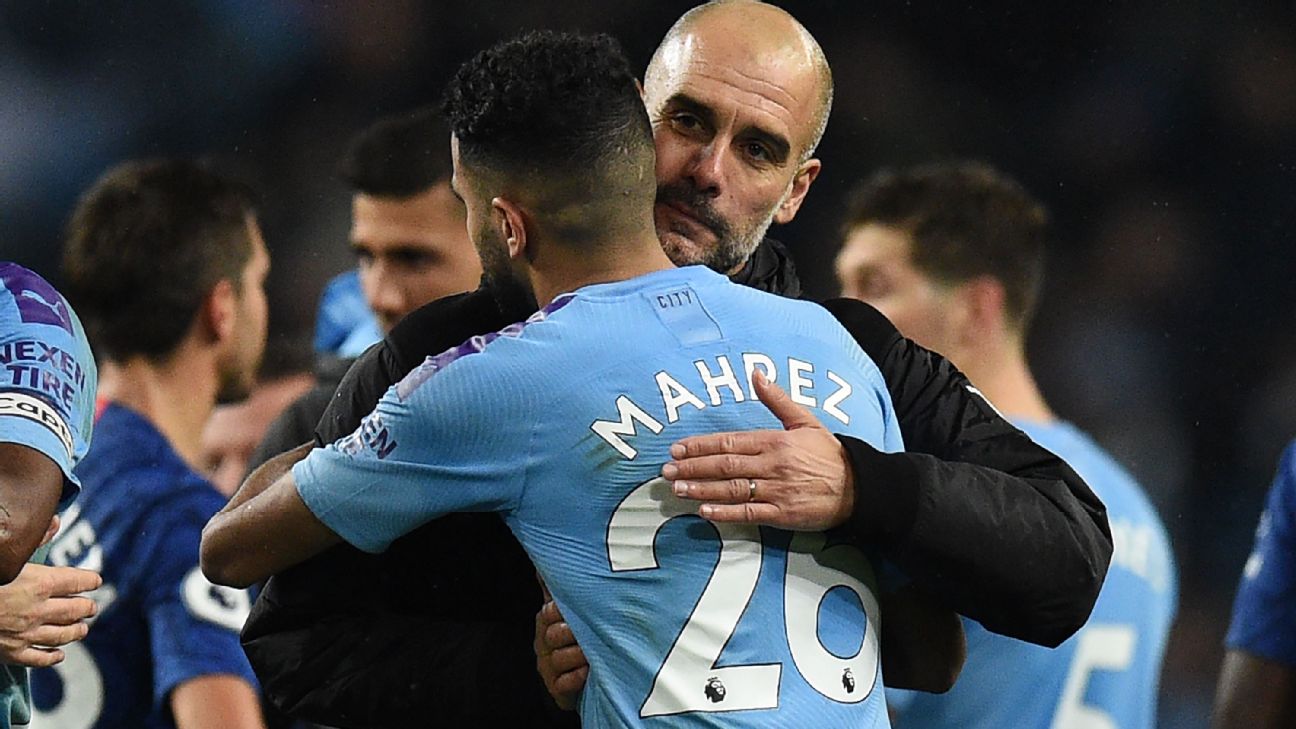 MANCHESTER, England — Pep Guardiola’s Manchester City have proven their footballing ability beyond doubt, but if this season is more a gauge of their character, they passed an important test by beating Chelsea 2-1.

There was a point earlier on Saturday when Crystal Palace were holding leaders Liverpool, meaning a City win would have closed the gap at the top of the Premier League to seven points. Instead, Guardiola’s players had to recover from news of another late winner for the leaders, this time courtesy of Roberto Firmino at Selhurst Park.

Moreover, N’Golo Kante‘s 21st-minute opener for Chelsea meant City, who just 13 days lost 3-1 at Liverpool, had to come from behind to ensure the distance remained at nine. That they did so, sealing the club’s 400th victory in the Premier League, sealed a move back into third place above Chelsea and the character on show should not be underestimated.

It came at a cost — Sergio Aguero, David Silva and Rodri limped off with injuries — but on a day when the passing was not quite as crisp and the chances were not quite as frequent, the champions found a way. Small wonder, then, that Guardiola hailed “a great victory.” He is refusing to throw in the towel in his search for three consecutive titles and his team served notice they do not intend to, either.

Guardiola spoke after the game about “suffering” and, pointedly, “determination.” It felt like a fair summary given that, midway through the first half, three points looked anything but certain. Willian had already fizzed a shot just wide of the far post for the visitors, when Mateo Kovacic flicked a pass over the head of Fernandinho and into Kante’s path.

The French midfielder used the yard of space left by fellow countryman Benjamin Mendy to draw Ederson — back in the City team after injury — out of his goal and Kante rolled his finish into the net. Frank Lampard had his hand in the air long before the ball crawled over the line, just out of Fernandinho’s reach. Aymeric Laporte, sat in the stands, winced at the defending. If City are to win the league, they need him back quickly.

The equaliser, nine minutes later, was fortuitous and against the run of play. A loose ball ricocheted off Fikayo Tomori and into Kevin De Bruyne’s path and he needed another deflection off Kurt Zouma to wrong-foot Kepa Arrizabalaga. Not all goals have to be beautiful and not all title wins have to be achieved with 100 points.

City’s second, on 37 minutes, was far more pleasing on the eye. The hitherto quiet Riyad Mahrez collected possession on the right, then drove infield past Kovacic and Emerson Palmieri before firing a shot inside the far post. The goal was so good that it was applauded when the replay was shown on the Etihad Stadium’s big screens.

In the second half, Kepa saved from Mahrez and the VAR, Andre Marriner, ruled out a late third from Raheem Sterling, who late bemoaned his misfortune on social media. At the other end, Mason Mount came closest to an equaliser for Chelsea with a free kick that flashed wide.

Lampard, on his return to the club at which he played the final year of his Premier League career in 2014-15, can count himself unlucky that Chelsea suffered defeat in the league for the first time since Sep. 22. It said everything about the performance of his young team that City were restricted to just 46 percent possession, the lowest recorded by a Guardiola-managed team in 381 top-flight games.

“There is always one thing in your lifetime that hasn’t happened,” the City boss said. “It happened. So, OK, I have another record, I won one game without possession. They are incredible team with Kante, Kovacic, Jorginho, so it can happen. Frank is a courageous manager. I try to judge managers, not good manager, bad manager, but a manager with courage to play.”

After Champions League commitments in midweek, City and Liverpool each play three league games in seven days. The champions visit Newcastle and Burnley before hosting Manchester United, while the leaders are at home to Brighton and Everton, then visit Bournemouth.

It is such weeks that help decide title races and City — with grit and fight rather than flair and beauty — made sure they are still in the hunt. Guardiola would rather be the manager nine points clear but Liverpool, unbeaten in 30 league games, have the pressure of history on their shoulders as they look for a first title since 1990.

“We will see,” Guardiola said when asked about City’s title chances. It is not over yet.