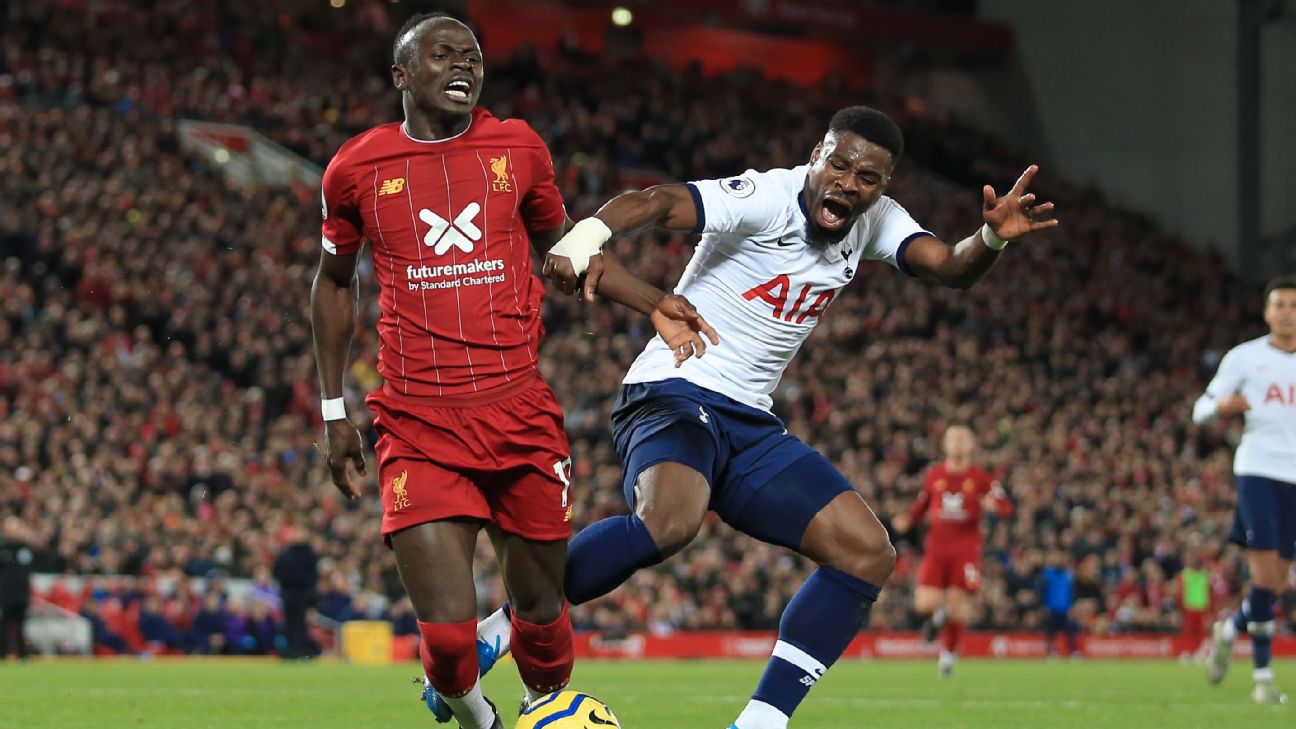 LIVERPOOL, England — It was Mohamed Salah who stroked home the 75th-minute penalty that secured a 2-1 Premier League victory over Tottenham at Anfield — a win that restored the leaders’ six-point lead over second-placed Manchester City. Jordan Henderson’s 52nd-minute goal — his first at Anfield since Dec. 2015 — was also crucial to the end result, with the captain’s strike cancelling out Harry Kane’s first-minute opener.

But while Salah and Henderson may grab the headlines for the goals that kept Liverpool on course for their first league title since 1990, this win was about one player more than any other. Sadio Mane shared the Premier League Golden Boot with Salah (and Pierre-Emerick Aubameyang) last season, and he ended the campaign as a Champions League winner, but the Senegal forward still does not get the credit he deserves for the contribution he makes to Jurgen Klopp’s team.

Salah gets plenty of attention, because of his goals and mercurial ability to make a difference when it matters, while Virgil van Dijk shares top billing with the Egyptian forward because of the solidity and certainty he has brought to the Liverpool defence. But Mane is now just as important as those two, and he may even have usurped them both as the man that Klopp could not afford to be without, simply because he is now consistently affecting games in Liverpool’s favour.

Against Tottenham, it was Mane who won the penalty from which Salah scored his fifth league goal of the season. And it was purely down to Mane’s tenacity, and even cunning, that the spot kick was awarded by referee Anthony Taylor.

Mane chased down Spurs defender Serge Aurier and, as the full-back attempted to clear, the Liverpool man put his leg across his opponent’s and cleverly drew the foul. It was perhaps harsh on Aurier, who has a habit of reckless behaviour in the penalty area, but Spurs manager Mauricio Pochettino had no complaints.

“The decision was made,” Pochettino said. “Technically it is a penalty because there is contact. It’s an action that’s soft, but it’s a penalty.”

Mane was involved in a similar incident against Leicester at Anfield earlier this month, when his stoppage-time tangle with Marc Albrighton resulted in another decisive penalty for Liverpool, which James Milner successfully converted. Spurs will also remember how Mane earned a spot kick in the Champions League final last season when his cross struck the arm of Moussa Sissoko.

But that’s what Mane does: He makes things happen by spotting opportunities and openings that others don’t.

Against Leicester and Spurs at Anfield, Mane’s involvement in the penalties being awarded strayed into the area of the player having won both spot kicks, rather than being the victim of a straightforward foul. He plays on the edge. Neither were dives, because contact was made by both Albrighton and Aurier, but Mane made the most of the contact on each occasion.

Yet Liverpool are a better team for having a player like Mane because he strikes fear into opponents, who have no way to defend against him when he approaches the final third of the pitch. His blistering pace enables him to stretch teams more than Salah can, and he is such an important cog in the Liverpool machine.

We don’t yet know how Liverpool would cope without Van Dijk because the Dutch defender never misses a game, but they have survived without goalkeeper Alisson Becker during his injury layoff this season and they are also flying high at the top of the table despite Salah having a slow start to the campaign. Losing Mane would be huge blow for Klopp, however, because they have nobody else quite like him.

He is also one of those players who prove that statistics can only go so far when it comes to telling you about their attributes. According to official Premier League stats, updated after this game, Mane has created just one assist this season, scored no penalties or free kicks and has missed the target more than he has hit it, with a shooting accuracy of just 48 percent. He has also missed six so-called “big chances” this season, but if there was a statistic that measured “making a difference,” he would be a nine and a half out of ten.

Mane has become as important to Liverpool as Raheem Sterling is to Manchester City because he offers goals, pace, movement and that rare ability of being able to terrify the opposition. He has also become a lucky charm for Liverpool at Anfield, having never been on the losing side for the club in the Premier League.

If that run continues, Liverpool will take some beating in the title race, especially if it survives the next home game. That one is against City, on Nov. 10, but with Mane in the team, Liverpool will have the edge.