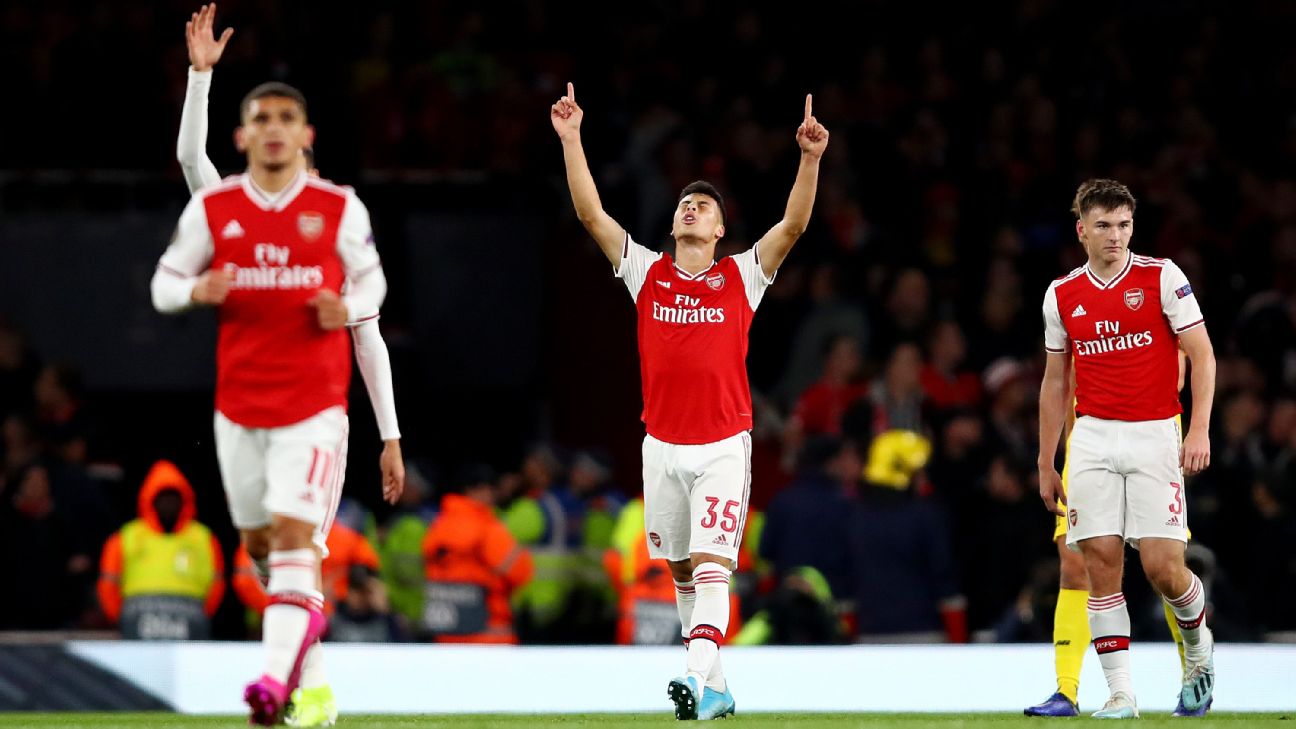 Arsenal romped to their second win of the Europa League group stage with a comfortable 4-0 victory over Standard Liege at the Emirates. Gabriel Martinelli scored twice inside 20 minutes, followed by goals by Joe Willock (22nd minuted) and Dani Ceballos (57th minute).

There were first European starts of the season for Kieran Tierney and Hector Bellerin, with both putting in good showings, while young Martinelli looks a real find. The Brazilian was clinical in front of goal, and will be knocking on Unai Emery’s door for some Premier League game time sooner rather than later.

There will be tougher tests to come for this Arsenal side on their quest for European glory, and the feeble threat offered by the Belgians meant some of the Gunners didn’t even need to break sweat, which perhaps isn’t ideal when it comes to gaining genuine match sharpness.

7 — Emery chose the right time to introduce Tierney and Bellerin, and his selection of a hungry front three paid dividends with a blistering attacking display, particularly in the first half.

GK Emiliano Martinez, 6 — Got away with some poor decision-making in the first half when engaging with some awkward crosses, but was never forced to make any testing saves against a blunt Liege attack.

DF Hector Bellerin, 7 — The Spaniard made his first start following a lengthy injury layoff, and was keen to get involved with his side’s attacking play, while being completely untested in his own defensive third.

DF Shkodran Mustafi, 6 — One loose pass in the first half went unpunished in what was the only blemish on a comfortable evening. Three clean sheets in three appearances this season for the German.

DF Rob Holding, 6 — The centre-back was a virtual bystander for the duration as Liege offered close to no attacking threat.

DF Kieran Tierney, 7 — Brilliant work down the left and a great cross provided Martinelli with the ammunition to head home the Arsenal opener, in what was an impressive European bow for his new employers.

MF Dani Ceballos, 7 — The Real Madrid loanee knitted play together nicely in the final third and occasionally dropped deep to pick up the ball from the back four. Finally, capped off a good display with an easy tap-in to put his side four up.

MF Lucas Torreira, 6 — The Uruguayan returned to his preferred central role in the Arsenal midfield but was guilty of one or two sloppy moments in possession. Failed to make the Liege goalkeeper work with a free kick on the edge of the box.

MF Joe Willock, 7 — The academy graduate reacted quickly to set himself and glide the ball home to put the game to bed midway through the first half. Brought off for Matteo Guendouzi for the final 16 minutes.

MF Ainsley Maitland-Niles, 6 — The 22-year-old was given a chance in his favoured right-wing role, but will be disappointed he couldn’t have the same impact as the rest of his attacking colleagues. Released Martinelli in the penalty area on the way to Arsenal’s fourth and was replaced by Nicolas Pepe in the 66th minute.

MF Reiss Nelson, 7 — Did well to work space out wide to supply the pass to Martinelli for Arsenal’s second, and played his part in the third as his blocked shot fell to the feet of goalscorer Willock. Replaced in the 79th minute by Pierre-Emerick Aubameyang.

FW Gabriel Martinelli, 9 — The 18-year-old got off the mark with an instinctive glancing header after 13 minutes, and followed it up with a superbly arrowed strike through a crowd of Liege bodies in the penalty area just minutes later. The Brazilian wasn’t done there, providing a lovely dinked cross for Ceballos to poke home Arsenal’s fourth.

Nicolas Pepe, 6 — Got himself involved with Arsenal’s attacking play but was unable to add to the scoring.

Matteo Guendouzi, N/R — Slotted into the Arsenal midfield to keep play ticking over.

Pierre-Emerick Aubameyang, N/R — The Gunners’ supreme marksman didn’t have quite enough time to get himself on the scoresheet in his brief cameo, but came close with a half-volley in the box in the closing stages.