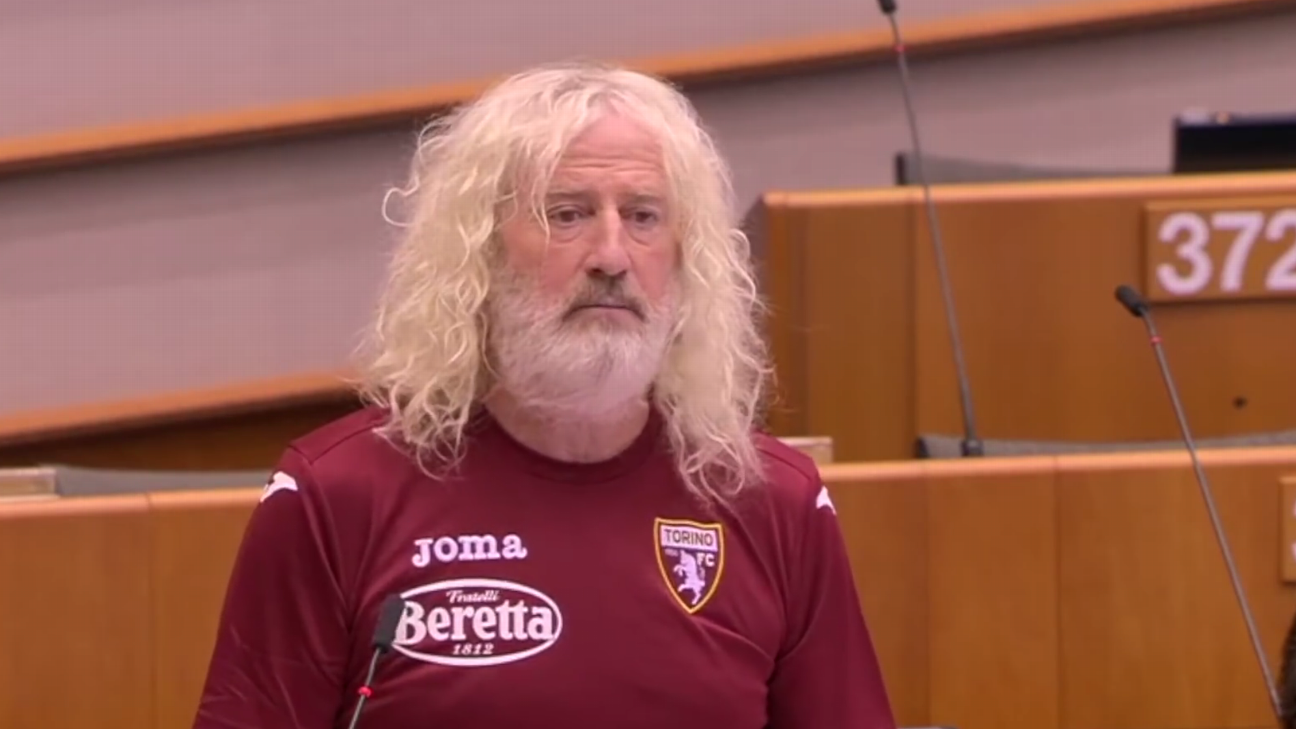 On Saturday, Mick Wallace will pull on his Torino shirt again only this time, the Irish Member of the European Parliament (MEP) won’t be standing at work in Brussels. “I’ll be in the Curva Maratona,” he says, standing side by side with the Torino ultras at the Derby della Mole vs. Juventus — streaming live on ESPN+ in the U.S., Saturday, 3:45 p.m. ET — the biggest game of the year for anyone who bleeds “granata.”

Wallace became a viral sensation on Torino Twitter in 2014 when he appeared in the Dáil chamber, Ireland’s parliament, posing questions to the then-Minister of Communications in the colours of their club. Earlier this month, the 63-year-old was at it again. Representing the European United Left-Nordic Green Left, he challenged the EU on a 22-fold increase in arms spending. “People say Europeans need more security. You know what? They do. They need the security of a home. They need security of a livable wage, they need the security of affordable good healthcare. That’s the security they need,” Wallace argued.

While the rest of the assembly sat and listened in the buttoned-up and stuffy formal wear associated with politicians, the Torino season ticket holder passionately articulated his point in last year’s Joma-manufactured home jersey.

Involved in politics since February 2011, Wallace recalls the uproar at his choice of outfit.

“There was a big debate when I got elected because I refused to dress up. They wanted me to wear a suit or a jacket and tried to get me thrown out of the Oireachtas [Irish legislature] unless I dressed properly. I said: ‘Well the people in the suits are the ones who have f—– this country up and I’m not going to wear one.’ I don’t wear suits anyway. I don’t feel comfortable in a straitjacket of any sort.

“I was challenging the system a bit. I just wore jeans and T-Shirts and whatever. I suppose wearing a football shirt was a natural progression from there.” Particularly given Wallace has more than 500 in his collection. “That’s not an exaggeration,” he insists.

Italian football captured Wallace’s imagination when he spent five weeks in the bel paese during the 1990 World Cup. “I’ve only missed one World Cup since 1978 and I’ve missed no European Championships in that time. I had a great time in Italy in 1990 and I started going to the league games every year from then on.”

His sister had already been living in Turin for five years and still lives in San Mauro on the city’s outskirts.

“I used to go to games all over the place. I still do,” he explains. “I’d see more than 20 Serie A games live per season. If I go over for the weekend I usually catch two or three games… I used to go to a fair few Juventus games then as well even though I always preferred Torino. But there isn’t a nice atmosphere in Juve anymore. I find it very right-wing. I find it stinks of money in the crowd. Torino followers are very much the ordinary people, much more down to earth. I’m on the left-wing of politics and I always go in the Curva Maratona. I feel very much at home there. There’s a lovely atmosphere. It’s just different.”

The Vanchiglia neighbourhood down by the Dora river, which winds through Turin and flows into the River Po, is one Wallace is familiar with. He owned an apartment on Corso Regina Margherita, one of Turin’s main streets in the historic city centre, for years. “I had to sell it when we got into trouble,” Wallace says as a preamble to his “wars with the banks” and “the vulture fund,” Cerberus Capital Management. “That’s more information than you probably want,” he laughs in self-deprecation.

A regular patron of the nearby Caffe Rossini, the owners Marco and Franco are “two mad Torino fans.” Wallace’s place in the Curva Maratona is close to where the two brothers stand. “Marco never misses a match,” he says. A 40-minute tram ride from the bar is the Stadio Olimpico-Grande Torino, re-named in memory of the greatest Italian club side of all-time, Il Grande Torino, and one that tragically perished in the Superga air disaster in 1949. “I always go a few hours before the match,” Wallace divulges, “because the atmosphere in the bars near the stadium is great. Of course the Stadio Olimpico is right in the city, it’s a great location for a ground. There’s a wonderful atmosphere in the bars before the game and after.”

Next door stands the Filadelfia, the ground where that Torino side forged its legend, its hallowed turf recently restored and re-purposed as Torino’s current training facility. Wallace spent 16 years bringing teams from Ireland over here to get valuable experience.

“I’ve been involved in football all my life,” he says, “I’ve coached and managed at Serie B level in Ireland with the Wexford Youths. I appointed myself as manager for the first three years, but I’ve managed underage teams for 27 years in a row. This is the first year that I am not managing an underage team.

“For 16 years in a row I brought the U-16s to Italy every year at Easter time and we used to link up with Torino Calcio. Torino have an amazing structure at underage level. Amazing. They’re one of the best in the country.” Take last season, for instance, when Torino won the Coppa Italia and the Super Cup at Under-19 level.

The cultural exchange only strengthened Wallace’s bond with the club.

“I used to bring my players for about seven or nine days, usually, and I used to bring them to different academies run by Torino and I’d organized to get them coaching from some coaches over there. Obviously, it was a big education for me too. We also played in tournaments over there. It was an amazing experience. Most of our players were from a working class background. Most had never been on an airplane before. Three-quarters [of my players] wouldn’t have been out the country before. It was a real culture shock.”

On the wall in Wallace’s office in Brussels is a framed picture of the 2012 Wexford Youths team he helped make All-Ireland champions.

“I feel honored to be in the European parliament,” Wallace says, “but winning six all-Ireland under-18s [titles] is the proudest thing I’ve done in my life.”

The jerseys are pink. “I took that from Palermo. I love the Palermo jersey,” he says. As for Wexford Youths’ badge, it shows a prancing bull, the symbol and spirit animal of Torino. “I made the crest off the Torino crest,” Wallace elaborates. “We had the maroon, the Torino colours as our second colours for a couple of years as well.”

Come Saturday, that particular shade will be Wallace’s primary colour again. He has been to five games in Italy this season, two of them involving his beloved Torino: the victories against Sassuolo and Milan. “I’m not a mad fan of [Walter] Mazzarri,” he says. “I think he’s a bit of a mercenary. I actually preferred [Sinisa] Mihajlovic even though I didn’t like his politics. I thought he was a better manager.”

As for the team itself, which is still yet to get over their Europa League play-off elimination at the hands of Wolves in the final playoff round, Wallace is disappointed that midfielder Soualiho Meïtè, in particular, hasn’t kicked on. “I find it strange,” he muses. “Maybe I’m missing something. He was amazing last season. I thought: ‘My God, we’re not going to be able to keep hold of this fella. But he seems to be struggling a bit this year.”

The same can’t be said of Torino striker Andrea Belotti who has scored 14 goals in all competitions for club and country this season. “His touch isn’t the best on the planet,” Wallace suggests. “But he’s a seriously good player.”

One of the other games the Irish politician attended this season was the Derby d’Italia, which Juventus won at the San Siro. “Juve are still the best team in Italy. But it doesn’t mean they’re going to win the league. They’ve only scored six goals in five away matches.”

Cause for optimism ahead of Saturday’s game, then?

Wallace was in the Maratona when Torino beat Juventus 1-0 in April, 2015, a result that ended a painful 20-year wait for a win in this rivalry. “It just means so much,” he explains. “It’s not just about football. It’s social. There’s just so much at stake and it just meant so much to them. I mean, people were crying, like. They were crying in the Curva after winning, it just meant so much.”

The outcome of the derby is how many Torino fans judge the team’s season. “Torino are never challenging to win and they’re not going to with their lack of funding but what they bring to the table is very good,” Wallace says. “That [day in 2015] was probably my best experience with them.”

Can this weekend will surpass it? In order for that to happen, Wallace believes Torino need to stop Miralem Pjanic. “I think he’s just amazing, he’s so hard to play against, he’s the guy who really makes it happen for Juve, I think he’s their most important player, if he were to have a poor night, it’d be a start.”

A start of a famous night perhaps and maybe something more. “Italy needs someone else to win the league,” Wallace says. “Hopefully Torino will play their part.”