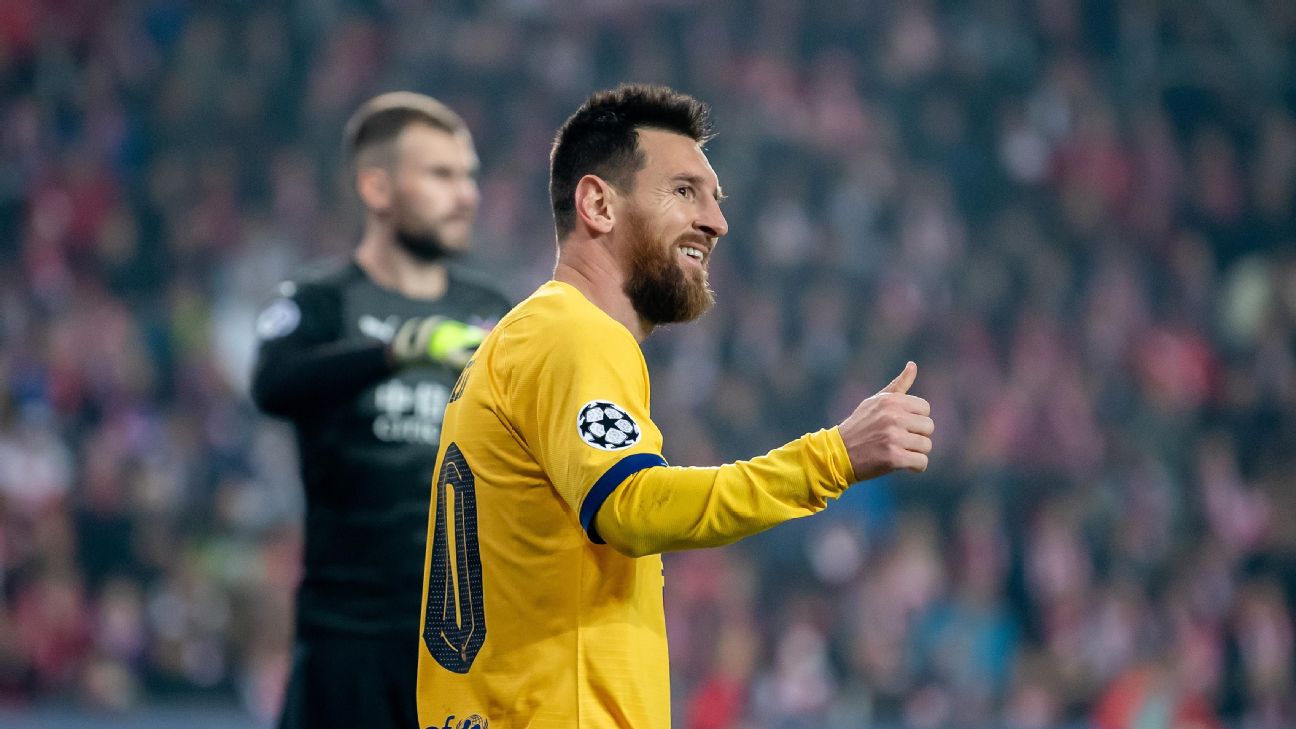 Barcelona remain unbeaten in the Champions League this season but were made to work for their three points on Wednesday as they beat Slavia Prague 2-1.

Lionel Messi opened the scoring at the Sinobo Stadium inside three minutes before the home side took control of the game. Slavia eventually got the equaliser they deserved when left-back Jan Boril finished a good team move in the 50th minute. However, an own goal from Peter Olayinka seven minutes later restored Barca’s lead against the run of play. Barca spurned chances on the break to kill off the game but spent the last 15 minutes on the back foot and relied on some frantic defending to see the match out.

The result. Barcelona now have seven points from three games — two of which have been away from Camp Nou. They will back themselves to reach the knockout rounds from here with Borussia Dortmund and Inter Milan three points back.

If this is the benchmark for Barcelona’s away performances in the Champions League (see also: Borussia Dortmund in September), there’s nothing to suggest they will fare better in the latter stages of the competition than they have in the past four years. Defeats in Paris, Turin, Rome and Liverpool have scarred them, and they were second best in Prague. Slavia are better than they will be given credit for — their draw with Inter this season and Europa League run last term prove that — but they shouldn’t have troubled Barcelona as much as they did when you look at the two clubs’ squads and budgets.

As for individuals, Luis Suarez, who is admittedly the club’s top scorer this season, was once again very poor. It’s been more than four years and 20 games now since he scored an away goal in the Champions League.

5 — Ernesto Valverde’s decisions here were predictable. With a free weekend ahead (the Clasico has been postponed) he picked his best lineup. Nothing wrong there, of course, but his substitutes were slow, obvious and ineffective. Suarez should have been taken off.

– Champions League group stage: All you need to know
– Lowe: The real-life reasons the Clasico was postponed

GK Marc-Andre ter Stegen, 7 — Not for the first time this season, he was Barca’s best player. Made two really good stops in the first half and a number of more-routine saves after the break.

DF Nelson Semedo, 6 — Looked lively in attack early on but struggled to get forward as much as the game progressed. Goal scorer Boril ghosted down his flank to grab the Slavia equaliser.

DF Gerard Pique, 6 — Made some good blocks but had a tough night. Lukas Masopust got between him and Clement Lenglet for the home side’s leveller.

DF Clement Lenglet, 6 — Like Pique, produced some impressive last-ditch defending but endured a difficult night overall. Had looked good on the ball early on.

DF Jordi Alba, 6 — Not involved in the attack as much as he has been in the past. Did set up one good Messi chance.

MF Sergio Busquets, 6 — Fighting for his place in the team. Did OK but was once again replaced by Arturo Vidal. Is no longer guaranteed a spot in Valverde’s side and needs to improve in general.

MF Frenkie de Jong, 6 — Barca’s best midfielder again, albeit on a night when none of them had their best games.

MF Arthur Melo, 5 — Set up Messi’s goal but retreated after that. Slavia won the midfield battle and he gave up the ball in dangerous areas in the second half.

FW Lionel Messi, 7 — Scored the opener after winning the ball back himself, and the winner came from his free kick. Also set up another great chance for Suarez. However, even he was guilty of failing to put the game to bed on the break late on, missing openings and messing up passes.

FW Luis Suarez, 4 — Wasted two really clear chances and displayed a lack of understanding with a number of his teammates.

FW Antoine Griezmann, 5 — Worked hard and deserves credit for that but didn’t add enough in the final third. Still finding his role in this team.

FW Ousmane Dembele, 6 — The Frenchman’s pace opened Slavia up but his final product let them off the hook.

MF Arturo Vidal, 5 — Came on for Busquets but gave away dodgy free kicks and was loose on the ball.