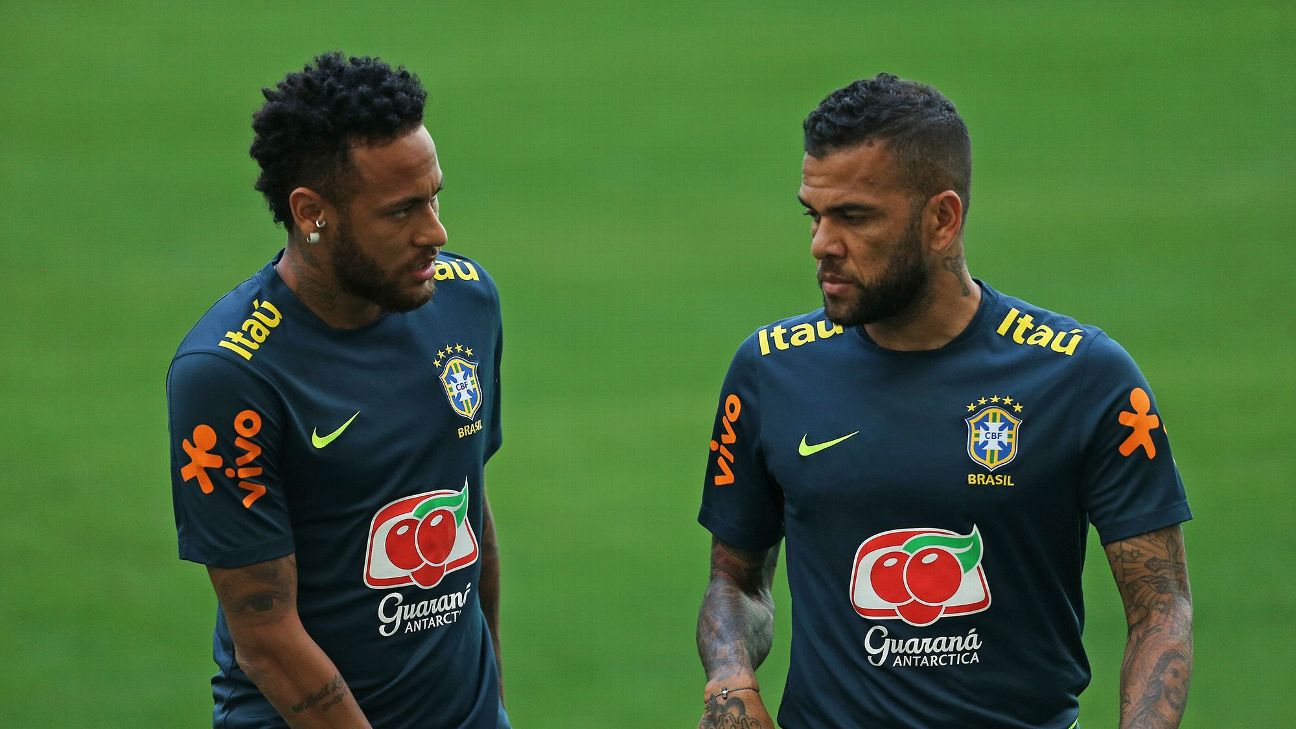 Brazil captain Dani Alves has said international teammate Neymar has the “sensibility of a child” and must change his ways in order to be respected.

Both players are friends and have been teammates at Barcelona and Paris Saint-Germain, but Alves believes Neymar is not taken seriously.

“At times, in order not to generate a certain type of sensibility, he retracts,” Alves told Brazilian TV SporTV Grance Circulo when asked about Neymar.

“Neymar is a very sensitive person. Neymar is very affected by many things, and at times many of those are unjust. Neymar has the sensibility of a child. But Ney is not a child, no. He is a man. People have to start learning to respect Neymar. The Ney of the Brazilian team people don’t respect. People only respect you when you position yourself.

“Ney has already won in football so he can talk and say what he wants. There are a lot that keep talking, commentating and haven’t won anything. That is why I value that he [would] position himself, because when they say something that is not right about you whether it’s [Walter] Casagrande or someone else, you have to stand up for yourself.”

Neymar, 27, was criticised during the 2018 World Cup in Russia for his diving.

The Brazilian superstar scored two goals in the tournament but criticised by the media, and also from players and fans, for going to the ground easily.

Neymar later admitted he at times exaggerated his reactions after being fouled.

“I always give Ney advice,” Alves added. “One of the things that I did speak with him about is that he should have positioned himself after the [2018] World Cup.

“I told him he should have taken a stance because Ney is the flagship of the Brazil team. He continues to be our flagship. Today he is the most important Brazilian football player and Neymar is among the top in world football. He needs to take a stance because he is in a place where he has to position himself and people have to understand who Ney is, how he thinks, and they have to start to learn and respect Neymar.”

Alves also said he encourages Neymar to be more vocal and lead by example.

“I believe and say that he has a responsibility with many people and he has to position himself,” he said. “He knows what i think. I speak openly because he already knows that I’ve spoken about this many times.

“Ney has the responsibility ever since he became a reference to children, to other athletes. When you start having that responsibility, you cannot disappoint them. It’s then when you have to take a stance. I always appreciate that.”

Who is Chelsea’s new €120m midfielder, Enzo Fernandez?
Klopp: We were improved despite FA Cup exit
Ancelotti: Slumping Real ready for ‘battles’ to come
Mewis likely out for WWC after second surgery
Al Ahly cruise to set up CWC match with Sounders