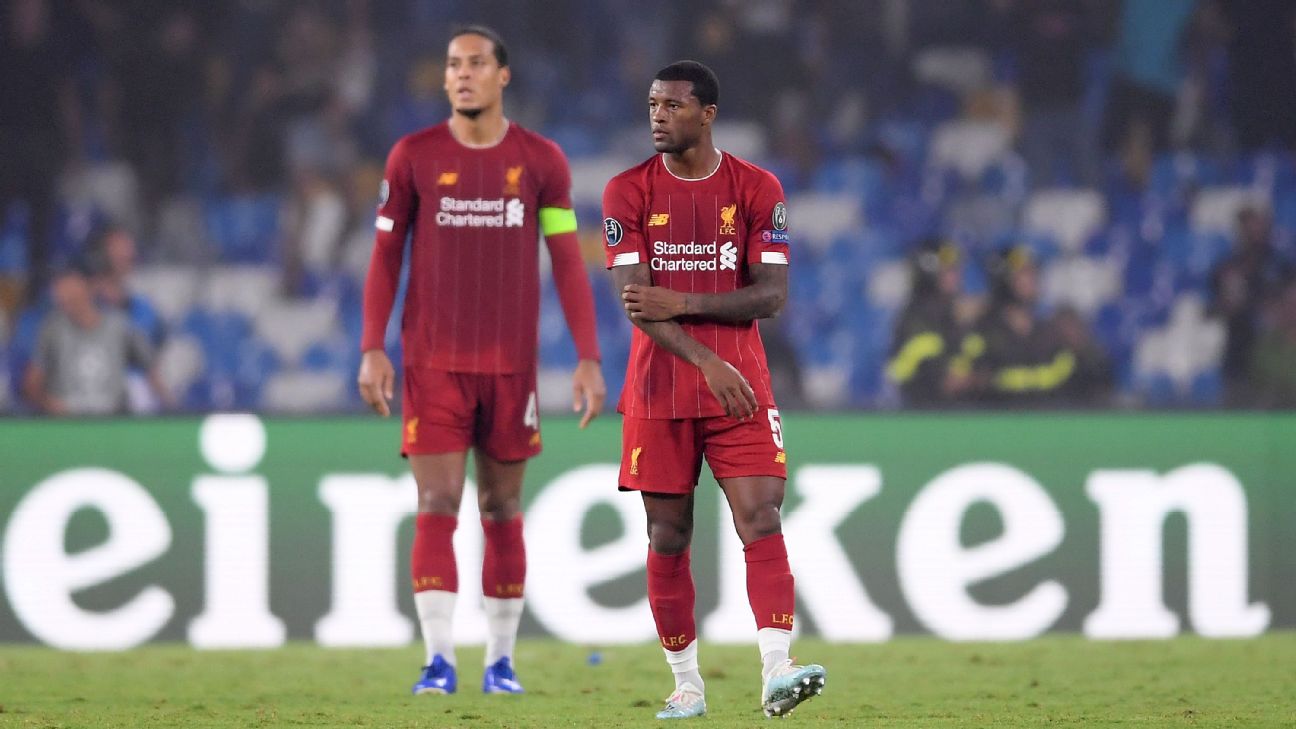 Virgil van Dijk insists there will be no hangover from Liverpool’s Champions League defeat to Napoli as there is no reason for panic following their first loss of the season.

The champions of Europe were on the wrong end of a 2-0 scoreline at Stadio San Paolo in Group E on Tuesday night, courtesy of a controversial penalty converted by Dries Mertens and a Fernando Llorente strike in added time.

The spot-kick, awarded on 82 minutes when referee Felix Brych felt Andy Robertson had impeded Jose Callejon despite the forward initiating contact, was highlighted as the game-changing moment by Van Dijk.

“It felt like it was going to be a draw, and then the penalty changed everything in the game,” the centre-back said.

“It shouldn’t be a wake-up call — we have been performing outstanding since the start of the season so there is no reason to panic.

“We played well, we put them under pressure, we created opportunities on the break. It is not easy to do that here you know, because they have the fans behind them, they are a very good footballing side, but we did it.

“Of course it is all about the result and we know it was the wrong result.”

Liverpool were markedly improved from their away display against Carlo Ancelotti’s men last October, where they did not produce a shot on target in what Jurgen Klopp described as their worst performance of 2018-19.

However, they were still uncharacteristically sloppy in the final third.

“You wish in the end there was something different, you pick another pass instead — the right pass — but it is like that sometimes,” Van Dijk said.

“There are always moments in games that could go better. But like I say if the penalty wasn’t given then it was going to be a draw.

“The reality is that we conceded the penalty and it was unlucky that Adrian got something on it, but it didn’t stay out.”

A rare loose Van Dijk pass was punished by Llorente in the dying minutes and while it was an exacting test for Liverpool’s rearguard, they were rarely troubled on Tuesday night.

“Napoli have a lot of movement, a lot of runs in behind and between the lines — it is not easy to defend against,” the 28-year-old said.

“But we did that pretty well I think, that’s my feeling after the game. They couldn’t put too much pressure on us, especially in the build up, which they do a lot in their home games.

“So there are many positive things we can take away from the performance. That is the key now looking towards the next game.”

Liverpool travel to Chelsea on Sunday aiming to make it six consecutive league wins as they set the pace at the top of the Premier League table.