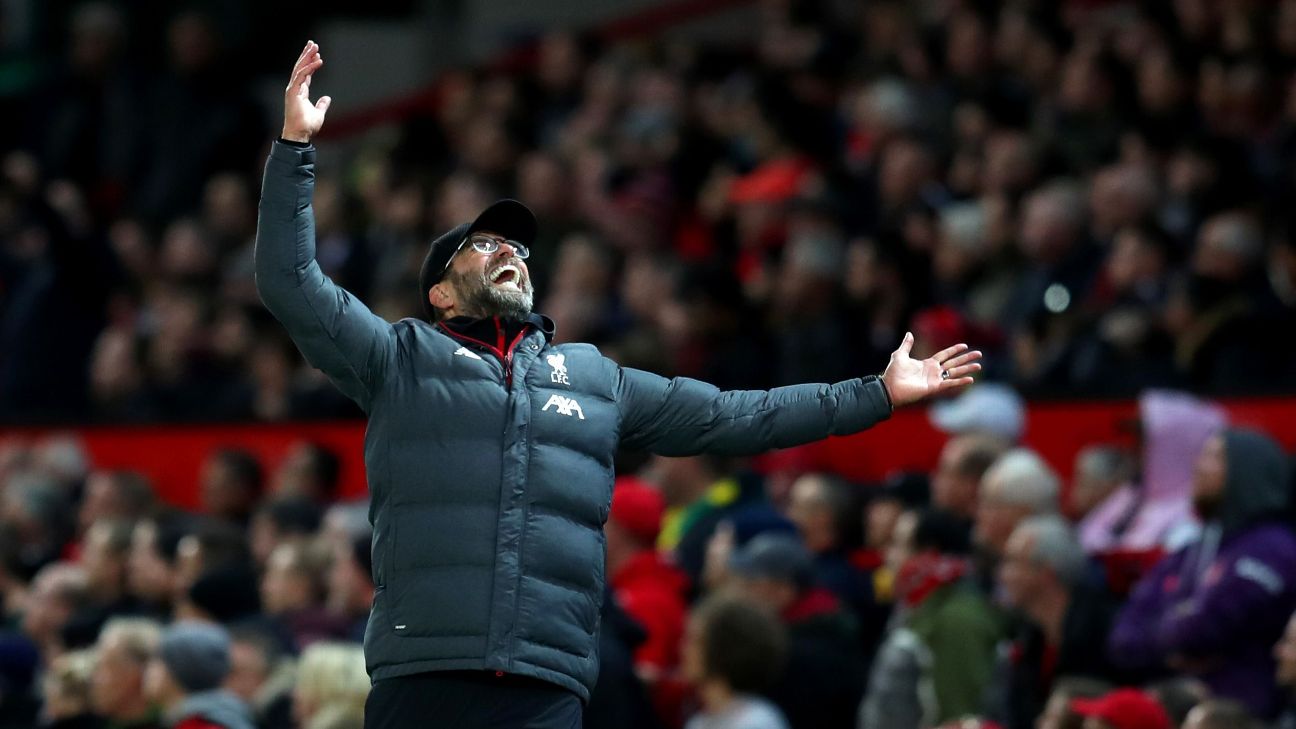 Another fantastic weekend of football brings with it another great bunch of numbers to sift through. ESPN brings you the best of the lot:

Manchester City, Chelsea, and Leicester won, Tottenham eked out a draw, but the headline match of the weekend in England was between the nation’s two most successful teams. Manchester United may not be the force they once were, but their game against Liverpool lived up to the billing.

United also prevented Liverpool from equalling another record – the most wins at the start of a PL campaign. Liverpool’s run ended at eight — Jose Mourinho’s 2005-06 Chelsea campaign had begun with nine.

Ole Gunnar Solskjær is the only manager Jürgen Klopp has faced more than once in the Premier League and failed to beat (two games, two draws).

Marcus Rashford and Adam Lallana’s goals for United and Liverpool, respectively, make it the first time Englishmen have scored for both sides in a Premier League meeting between United and Liverpool since November 2001 (Michael Owen and David Beckham).

No side has dropped more points from winning positions in the Premier League this season than Manchester United (8, level with Aston Villa). It remains Solskjaer’s biggest problem, as it has meant the difference between United potentially being third and their current 13th position on the points table.

Manchester United have not lost a league home game after leading at half-time since May 1984 (1-2 vs Ipswich), 35 years ago.

There ain’t no party like a Jamie Vardy party. Since Brendan Rodgers’ first PL game in charge of Leicester, Jamie Vardy has scored 15 Premier League goals – two more than any other player.

What a start to the season John McGinn is having with Aston Villa. He is the only player in the PL so far this season with 20+ shots, 20+ tackles, 20+ take-ons and 20+ fouls won.

Thibaut Courtois surely couldn’t have thought it would be this bad when he agitated for a move from Chelsea to Real Madrid and got his wish last summer. He has now conceded from nine of the last 14 shots on target he has faced for Madrid in all competitions.

The last time Madrid lost a league game at Mallorca was in February 2006. As it happened, Florentino Perez resigned the day after.

Antoine Griezmann, Luis Suarez, and Lionel Messi all found themselves on the scoresheet for Barcelona in the same game for the first time. The Frenchman has had a decent start to life with the Blaugrana. Only Loren Moron of Real Betis (eight goals) has been involved in more goals this La Liga season than Griezmann, who has been a part of seven goals (four goals, three assists).

Frankfurt, Hoffenheim and Borussia Dortmund won (the latter two beating Schalke and Borussia Monchengladbach respectively), while RB Leipzig drew with Wolfsburg. The surprise of the weekend, though, saw unfancied Augsburg hold Bayern Munich to a 2-2 draw.

What is with this season’s Bundesliga table? Since the introduction of three points for a win, there has never been such a small margin of points (two) between the first and ninth in the league at such a late stage of the season (post the eighth gameweek).

FC Augsburg are the first ever team to score in the 1st and in the 90th minute of a Bundesliga match against FC Bayern.

Only two players have scored in eight straight Bundesliga games to start the season — Pierre-Emerick Aubameyang and, now, Robert Lewandowski.

Ronaldo and Messi scored this weekend. Of course they did.

With his goal against Bologna, Cristiano Ronaldo has now scored against 17 of the 20 teams he has faced in Serie A. Roma, Cagliari, and Chievo are the odd ones out.

Lionel Messi has now scored 16 goals in just 10 games against Eibar. At this point, it seems like he just needs to turn up against them.

As ever, it’s hard not to comment on just how remarkably easy these two have made being consistently good look like.