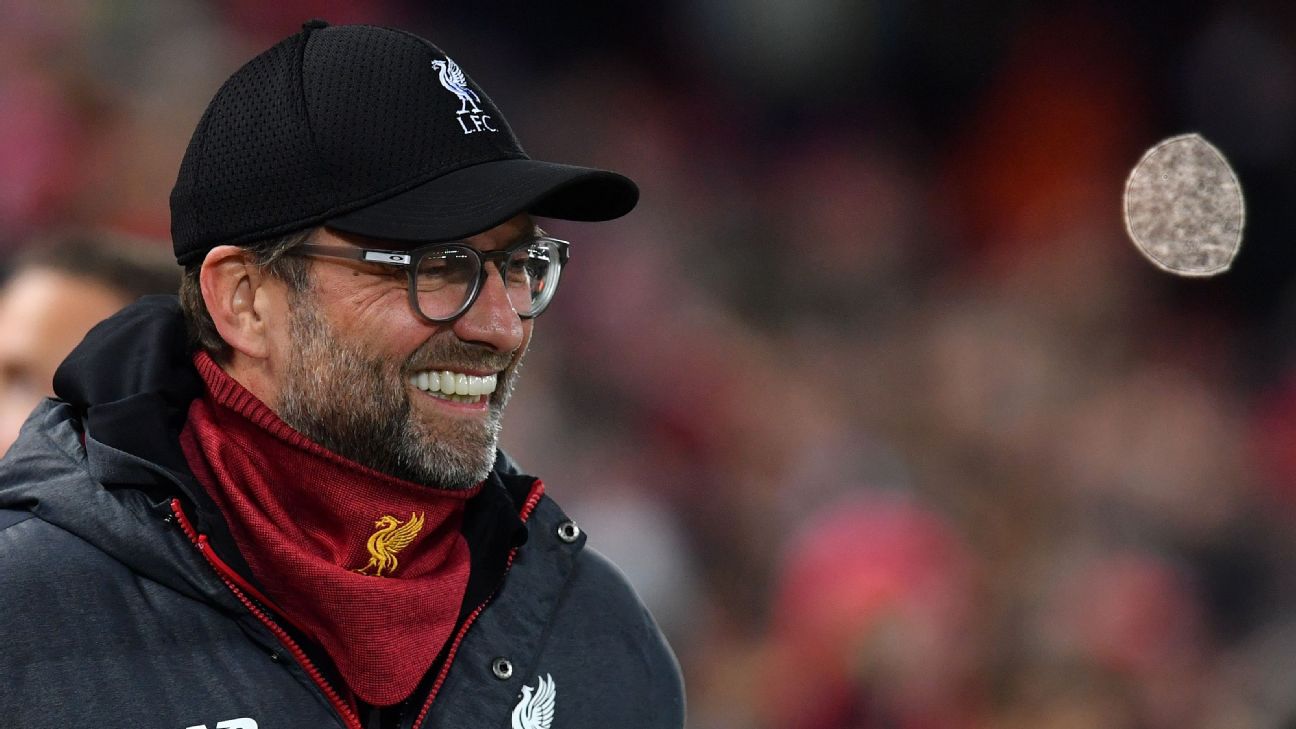 It’s that time of the year, again. November is the month when the Premier League table starts to look a significant barometer. The silverware and wooden spoons are still seven months away. Things can change, of course, but we’re past the point where the standings can be dismissed as an early season freak. The surprises are Leicester in third place, promoted Sheffield United in the top half, Spurs struggling and last season’s FA Cup finalists Watford winless and bottom of the table.

Six points clear and unbeaten, they continue to find a way to stack up points even when not at their best or when falling behind, as they did against Manchester United and Spurs. Manically motivated to win their first title in 30 years, it looks like only an injury to centre-back Virgil Van Dijk or one of the dangerous front three — Mo Salah, Roberto Firmino and Sadio Mane — can stop them.

Unscripted defeats by Norwich and Wolves underline that, for all their brilliance, they are capable of the odd slip, especially with so many injury problems in defence. The crunch game at Anfield on Nov. 10 is one they cannot afford to lose.

The extraordinary 9-0 win at Southampton last Friday was a reminder of their talent and firepower. And surprisingly no team has conceded fewer goals. A Champions League place beckons for Brendan Rodgers’ side.

Their young guns and articulate manager Frank Lampard have been a revelation, while “Captain America” Christian Pulisic is starting to do a fair imitation of Eden Hazard. The only question is whether these exciting youngsters can sustain this exciting form.

Restless fans are starting to wonder if this team is really so different in character to a latter day Arsene Wenger outfit. They can’t seem to perform away from the Emirates and on Sunday, they couldn’t even hold a 2-0 lead over Crystal Palace. At least club record signing Nicolas Pepe is starting to show his worth with some immaculate set-pieces.

Punching above their weight for wily old fox Roy Hodgson despite scoring only 10 times in 10 matches. Sunday’s comeback to draw 2-2 at Arsenal typifies their ability to achieve good results.

There have been signs of a PR “reboot” and mini-revival over the past week, unlucky as they were not to beat Liverpool before getting two away wins at Partizan Belgrade and Norwich City. Ole Gunnar Solskjaer’s side are still a long shot to finish in the top four but the Anthony Martial/Marcus Rashford chemistry is promising. You’d also expect them Man United to have a busy January transfer window, which would help a squad in need of quality depth.

Almost everyone’s tip to be relegated, Chris Wilder’s tenacious, spirited and innovative team are yet to lose an away game and boast the joint-best defence in the Premier League with just eight goals conceded. It will probably get harder, but they look good enough to stay up with ease.

The goals have dried up lately, but they’ve lost only three of their 10 games. However, manager Eddie Howe will be wary of not repeating last year’s midseason slump.

Erratic and infuriating for their fans. They have some artistic players (Andriy Yarmolenko, Felipe Anderson, Manuel Lanzini), but can’t seem to put a winning run together that would elevate them from being anything more than a midtable outfit.

Are we witnessing the start of the end game for the affable Mauricio Pochettino? Showed real fight at Anfield on Sunday, but the losses to Newcastle, Colchester, Bayern Munich and Brighton were worrying and there’s a suspicion this very good team has gone a little stale.

They are putting a bad start behind them both at home and in Europe, where they are intent on a long and eye-catching run as part of their ambitious plans to compete for trophies. But they must walk before they can run.

It would be easy to take for granted the steel and unity Sean Dyche has knitted into this small-town club. Always hard to beat, they should give him a lifetime contract.

In his debut season, Graham Potter is fulfilling his brief to produce a bolder and less pragmatic team. The trick will be sustaining the good football while keeping the club above the relegation zone.

Dean Smith has done a magnificent job in taking this club back into the big league. They look equipped to stay, prompted by Tyrone Mings and the elegant playmaker Jack Grealish, who is being closely watched by England manager Gareth Southgate.

These are sticky times for the Toffees. They look suspect defensively and probably need to get away from the wrong end of the table in order to keep Marco Silva as manager. Their bright form in the recent win over West Ham needs to be repeated on a regular basis.

The funereal atmosphere and empty seats at St. James’ Park even when the team were leading against Wolves was another sign of how owner Mike Ashley’s toxic reign has sucked the life from the Toon. Manager Steve Bruce has a massive job keeping them up.

The nine-goal humiliation by Leicester leaves manager Ralph Hasenhuttl on the brink. But the players were a disgrace and it’s Manchester City away next.

They were always going to struggle if Teemu Pukki’s goals dried up and that is what is happening now. The astonishing win over Manchester City looks like it might be as good as it gets.

There are one or two signs the patient still has a pulse, but still looking for their first win. They urgently need talismanic striker Troy Deeney, out with a knee problem, back to join a group of players that should be good enough to avoid relegation.