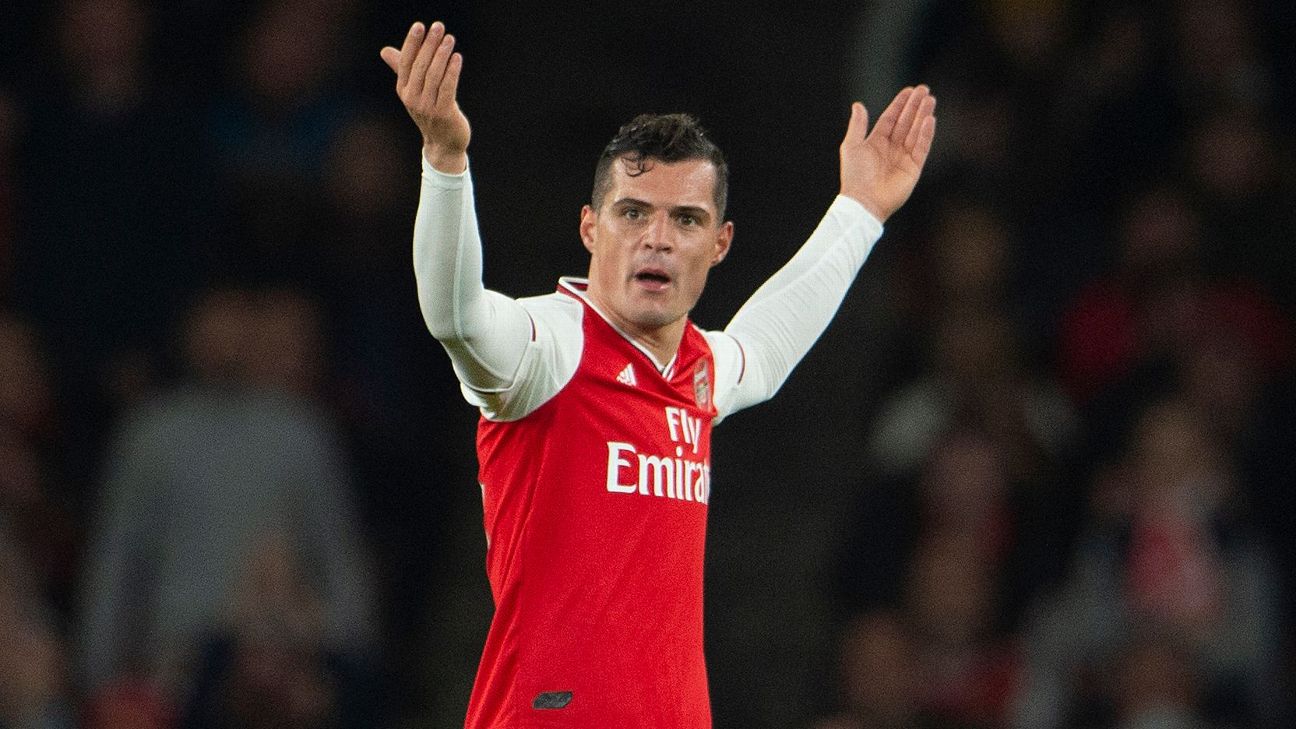 Another wild weekend in the Premier League saw Arsenal’s failings on and off the field laid bare, Liverpool’s title credentials enhanced yet again and Leicester show they’re the real deal after scoring nine at Southampton. We get you caught up on the action with the Weekend Review.

Is this the end of Emery and Xhaka?

The margins are fine in football. Unai Emery was one abysmal VAR decision (on which, more later) from a second win in a row, a hard-fought and restorative three points to follow the win against Vitoria Guimaraes in the Europa League, after the horribly limp loss to Sheffield United last Monday. It’s also easy to forget that Arsenal didn’t actually lose to Crystal Palace.

But Sunday’s 2-2 draw felt like the day something snapped among the Arsenal fans, of course not helped by Granit Xhaka. Everyone realises that being booed by your own supporters is unpleasant, humiliating and in an ideal world wouldn’t happen at all. But Xhaka’s reaction was absurd, immature and self-defeating.

It’s not so much the cupped ear or the expletives as he stalked off down the tunnel that are objectionable. Those could be understandable, if not really excusable. But deliberately slowing down as he walked off, when his team had let a two-goal lead slip and were chasing the game, was unforgivable and suggested he was more concerned with making a petty point against some people who were being mean to him, than his own team winning.

This comes back to Emery, too. He did, after all, appoint Xhaka as the first of his five captains, the fifth of whom was Mesut Ozil, now ostracised from the first team.

More tangible than who he chooses for a ceremonial role are results. Arsenal have won two of their last eight, and stretching back to the dreadful end of last season which cost them a Champions League spot, they have won six of their last 17 and taken 23 points from an available 51.

Which would just about be acceptable if there was any sense of a style coming through, of progress being made, a new identity forged. But there’s none of that. It wouldn’t be a surprise if Emery is dismissed in the next couple of weeks.

VAR: worse than anyone imagined

It’s pretty remarkable just how much of a mess the Premier League have managed to make of VAR. It was bad — really bad — before this weekend, but now it’s gone completely haywire. After some of the decisions overturned this weekend, the “high bar” we were told that would be applied has now been lowered to shoelace level: it feels a bit like a restaurant dress code suddenly changing from white tie and tails to Speedos and slippers.

Over the games this weekend we’ve seen Everton, heading for victory against Brighton, penalised because Michael Keane might have trodden on Aaron Connolly‘s foot; Norwich concede a spot kick against Manchester United that even Ole Gunnar Solskjaer didn’t think was a penalty; and Arsenal lose out on three points when Calum Chambers was seemingly punished for being fouled.

It almost feels like VAR is a truculent child, who after being told it wasn’t changing enough decisions, suddenly just said: “Well, let’s see how you like THIS.”

As it’s being applied at the moment, VAR has turned English football into a chaotic farce, impossible to have any faith in, virtually unwatchable because this malevolent cloud is hanging over everything.

The stated aim at the start of the season was for VAR to improve the ratio of correct refereeing decisions from 82% to 95%. The question then was whether the potential disruption would be worth the extra 13%, but now not only does that figure feel like ludicrous optimism, we’re going the other way.

Liverpool’s mentality monsters do it again

The encouraging thing for anyone who wants Liverpool to win the league is the variety of ways they’re winning games. It felt like they took conceding that first goal against Spurs as a personal affront, which they aggressively kicked back against: it’s arguably Tottenham’s best achievement of the season that they held out against the siege (for the most part thanks to Paulo Gazzaniga) until the 52nd minute when Jordan Henderson equalised, and then only lost via a penalty.

“Twenty-eight points is good but you only have to think what would have happened if we had lost today, what the question would have been,” said Jurgen Klopp afterwards. “We have to be focused on all the games, next one Arsenal, then Aston Villa, then Genk, then Manchester City.”

That City game is only two weeks away now. Can’t wait.

It’s an indication of how bad their season has been so far that a 2-1 defeat counts as progress, but Tottenham did seem much better against Liverpool than they have been over recent weeks. This despite some curious selection decisions (not starting Tanguy Ndombele and picking Danny Rose over Ben Davies were the primary head-scratchers) and the ongoing calamity that is Serge Aurier.

It was very “on brand” of Aurier to win the ball off Sadio Mane — twice — and then clumsily give away a penalty, and it further emphasised that not signing a right-back was one of the biggest mistakes Spurs made in the summer. Their options in that position are Aurier, always liable to pull this sort of stunt, the lightweight Kyle Walker-Peters and Juan Foyth, a centre-back shoe-horned onto the flank.

As it turns out, Frank Lampard knew what he was doing in his management of Christian Pulisic. The USMNT’s golden boy looked increasingly despondent with every game he wasn’t in the starting XI in recent weeks, but his grin after the hat trick in the 4-2 win at Burnley was wide and heart-warming.

“He had a week’s break this summer,” said Lampard. “He arrived for a big price and wanted to come straight back in, but at the same time, why am I going to throw him in?”

Why indeed. Pulisic will be smart enough to know this won’t cement his place in the side for the rest of the season, though: the beauty of this Chelsea squad is they have four top-class wingers, ensuring that rotation doesn’t necessarily mean weakening his side.

For that to work it requires players being flexible enough to adapt to not playing every week: if Pedro, Willian and Callum Hudson-Odoi all follow Pulisic’s lead, this could be a sensational season for Chelsea, who have now won seven straight in all competitions.

Did Southampton get away with only losing 9-0?

It could’ve been worse. It feels absurd to suggest that a team losing 9-0 actually got away relatively lightly, but Leicester took 25 shots at St Mary’s on Friday night, 15 of which were on target, which doesn’t even take into account the low cross that Jonny Evans narrowly missed with his toe, open goal waiting, in the closing stages.

Statistically, that’s a little better than how many shots on target it usually takes Leicester to score a goal this season (before the game they had 16 from 31 on target), but statistics don’t take into account the mental state of a team that is 5-0 down at half-time and is staring down the barrel of double figures by the hour mark.

And that’s the real danger of this result. The driving rain didn’t help, but as this monsoon of goals swept into the Southampton net, Ralph Hasenhuttl looked genuinely traumatised, slightly unable to comprehend a) what was happening in front of him and b) that ultimately it was his fault. He did take responsibility afterwards, and by all accounts his position is not in danger, but he has an immense task on his hands to just get his players’ heads right now.

If anyone was in doubt whether the Saints were in a relegation battle before, they surely aren’t now.

What of Leicester, though? They finish the weekend in third, and while Liverpool and Manchester City are probably too strong for them to be genuine title contenders, Brendan Rodgers’ side aren’t far off. He’s done a sensational job since arriving in March and at the moment it would probably be a surprise if they didn’t take one of the Champions League spots.

Martial’s form means United can turn to their midfield

Manchester United need another forward in January, but if Anthony Martial can stay fit then suddenly that drops down their list of priorities. Midfield help is probably more urgent: even if Ole Gunnar Solskjaer praised Fred, Andreas Pereira and Scott McTominay after the 3-1 win over Norwich, but the latter gave away a goal after carelessly losing possession and the former nearly did the same with a slack pass in the first-half.

Paul Pogba will be out until December and his ankle problem has now flared up enough times for it to be a longer term concern, while who knows whether they will even want Nemanja Matic back in the team when he returns to fitness.

Even if Martial can avoid injury they need at least one more forward, but a combination of him scoring goals and the frailty in the middle means it’s not United’s biggest concern at present.

Norwich will laugh at United’s injury problems, though. Daniel Farke’s side were already without six players before Sunday’s game, but four more were struck down during it, with at least two of Emi Buendia, Tim Krul and Ibrahim Amadou only finishing the game because all three substitutes had been used, while Jamaal Lewis went off having complained of illness and a high temperature.

They already had a tough task trying to stay in the Premier League, but to try it without half their squad makes it almost impossible.

“The decision and why that happened is very difficult to understand. We were in control at that moment and it completely changed the game.”

Usually it’s wise to dismiss any suggestion from a manager that a single refereeing decision cost his team the game, but in this case you can’t disagree with Marco Silva, after Everton were denied at least two, probably three points, depending on how much you blame them for conceding another after the penalty awarded to Brighton.

“Maybe we got a bit lucky,” said Graham Potter, which translated from manager speak actually means “boy, did we get away with one there.”