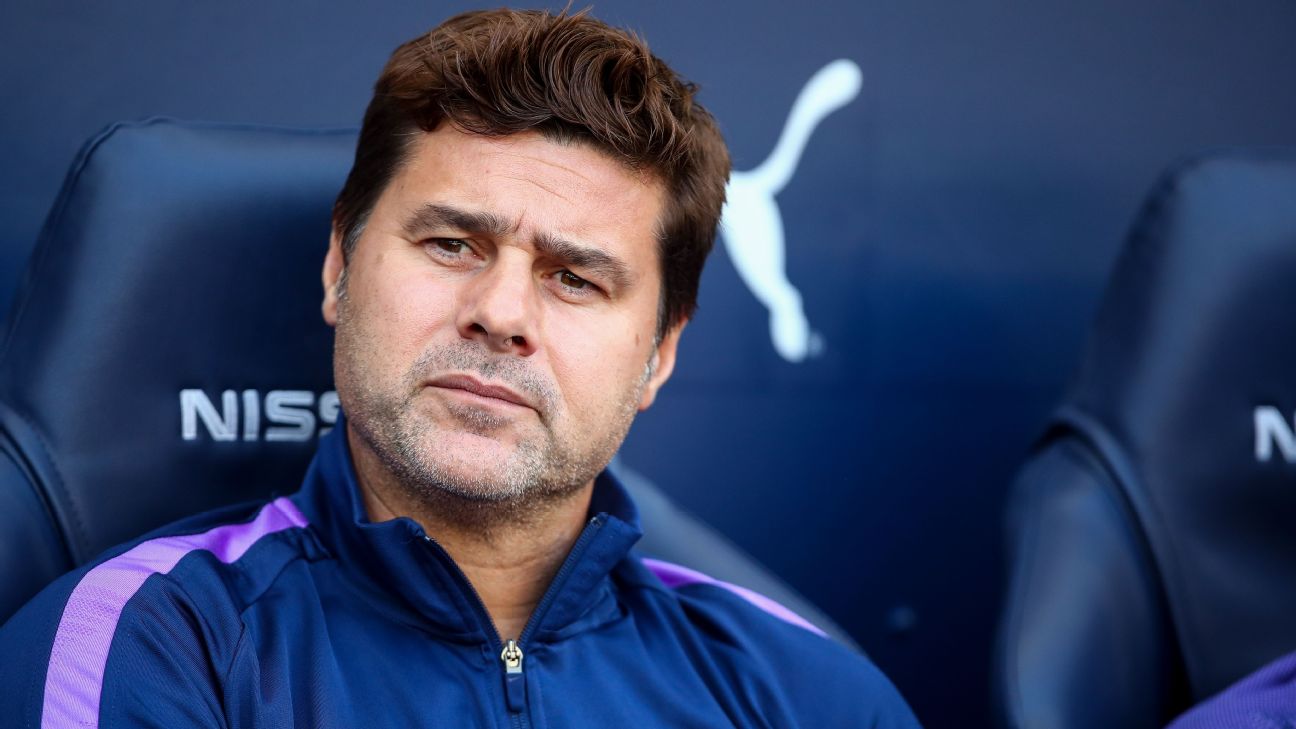 All you need to know about this weekend’s Premier League action, all in one place.

Jump to: Is Tammy the real deal? | Winless Watford face wounded City | Tune in to the battle of the south | The Premier League team that needs some luck | Why everyone needs to avoid Harry Kane | Good old reliable Burnley | The man with the most thankless task in football |   Best stats of the weekend |  ESPN’s fearless predictions

Are the Tottenham players listening to Pochettino anymore?

It’s an age-old maxim in football that, eventually, players simply stop listening to a manager if they stay at one club for too long. Jurgen Klopp always said that about his latter days at Borussia Dortmund, when his instructions simply were not getting through to his squad as they once did.

Is the same thing happening at Spurs? Mauricio Pochettino’s declaration that his players didn’t “respect the plan” in the first-half of their 2-2 Champions League draw with Olympiakos on Wednesday was worrying, and did suggest that some of the players who have been there for the duration of Pochettino’s five-year tenure have started to switch off. Perhaps that is the root cause of the slump and modest results that have spilled from the back end of last season to this.

“I can see why the manager is frustrated because he’s been here for six years now and we’re still making similar mistakes to the ones we were in his first year,” said Harry Kane after the game.

This weekend they travel to face a Leicester team who will almost certainly approach this match in a more proactive manner than they did against Manchester United last weekend: A test for sure, but a win for Spurs will, if nothing else, be good for the perception that Pochettino can still make himself heard.

Can Abraham score against a “big” team?

This will inevitably sound dismissive and even patronising to Wolves, Sheffield United and Norwich, but this weekend sees Tammy Abraham‘s biggest test as Chelsea’s No. 9. The English forward has seven goals against those three opponents, which is hugely impressive but you could easily dismiss those as merely strikes versus teams new to the Premier League or in terrible form.

On Sunday however, Abraham will come up against Liverpool and Virgil van Dijk, arguably the best team and central defender in Europe at the moment. Should he score goals against the European champions, then it won’t be as easy — impossible, even — to dismiss his feats as that of a flat-track bully.

What will Manchester City’s response to last weekend be?

Five games in, and Manchester City are five points behind Liverpool having already dropped more points than they did in the whole second half of last season. Last weekend’s defeat at Norwich could easily turn out to be a freak result, the sort of scoreline that inevitably happens in a world with human fallibility and luck. But that will only really be determined by what happens in the next few games.

They probably couldn’t have asked for a better next game, on paper at least. Watford are the visitors to the Etihad, a team without a win thus far this term, who they eviscerated in the FA Cup final and scored 11 times against in three games last season. But the Hornets have a new manager whose remit was to tighten their defence, so it will be interesting to see how City’s attack approaches that particular challenge.

If we see a repeat of the corresponding games last season, we can safely assume that Norwich was a blip. If not … then who knows what the coming months could have in store?

Sure, you’ve probably got better things to be doing on a Friday evening, but forget your friends, never mind going to see a film, cancel those drinks: Watch Southampton vs. Bournemouth instead.

Not only is this a derby (of sorts), but it’s a game between two teams who are pretty good fun to watch. Ralph Hasenhuttl has injected new life into the Saints, while the Bournemouth forward-line featuring Harry Wilson, Josh King and Callum Wilson is certain to provide something to remember.

Stay in, feet up, have some fun.

Aston Villa: There’s been a sense that Aston Villa are slowly building towards a really impressive result. Their one win this season has been against Everton, but they’ve narrowly lost to Crystal Palace and Bournemouth, while on Monday they drew with West Ham.

It was always going to take a little time to integrate their new signings, but that’s happening gradually, and when they click you sense something special could happen. Or, possibly, they just need a bit of luck: Could they get that when they visit Arsenal on Sunday?

Kieran Darcy has some tips for the weekend action. Read his full preview here and set your team line-up!

Aguero has scored in each of Manchester City’s first five Premier League games, and is tied for the league lead with seven goals in total. And he was rested for their Champions League win on Wednesday, so should start against bottom-of-the-table Watford on Saturday.

Everton lost 3-1 at Bournemouth last week, but Richarlison followed up his brace against Wolves with an assist, four shots and three chances created, and one of his shots hit the woodwork. Now he’ll be at home against Sheffield United.

Kane scored two goals and took eight shots in Tottenham’s season-opener against Aston Villa, but has scored just one goal in four league games since, and that was via a penalty kick. Worse yet, he’s only taken six shots combined in those four games, and now faces a tricky away fixture against Leicester City.

ONE THING THAT WILL DEFINITELY HAPPEN

Norwich will crash down to earth against Burnley: If we’ve learned one thing down the years, it’s that football will take a big run up and kick you in the groin, just at the point where everything seems to be going well.

So Norwich City, fresh from their exhilarating victory over Manchester City last weekend, will inevitably be brought right back down with the bumpiest of bumps against Burnley.

There’s logic to back that up too: Sean Dyche’s side are solid and Norwich still have a raft of injuries, and ultimately they probably won’t have the fine play and luck they needed to win last time out.

Kepa Arrizabalaga: Or perhaps this should be “man with the most thankless task in football this weekend.” Under Frank Lampard, Chelsea are yet to keep a clean sheet: A combination of their gung-ho style of play, inexperienced defenders and changing systems meaning that there’s been no consistency and no solidity in their back-line

Perhaps things will be a little less porous if N’Golo Kante returns, but against the myriad attacking talents of Liverpool, it could be a long old Sunday for nominative determinism’s favourite keeper.

– Manchester City are on an 11-game winning streak against Watford in all competitions, scoring at least twice in each match (38 total). Sergio Aguero, who is the top scoring player in the Premier League in 2019, is on a six-game scoring streak — the last player to score in seven in a row was Romelu Lukaku in December 2015 for Everton.

– Tottenham have lost their last six away games in the Premier League. They go to Leicester City, who sit fourth in the points table since Brendan Rodgers took charge in March. Jamie Vardy has scored more goals against the “big six” than any other player, with 31 (Aguero has 30, Harry Kane 23), since 2014-15.

– Brighton’s Pascal Gross has created the fourth-most chances (148) in the Premier League since his debut in August 2017, only Eden Hazard (182), Christian Eriksen (178) and Kevin De Bruyne (161) have more in that span

Southampton 2-1 Bournemouth: The Cherries blow hot and cold. We’re picking cold this weekend.
Leicester City 2-2 Tottenham Hotspur: Plenty of goals but a share of the points.
Manchester City 5-0 Watford: It’s the Hornets that will be stung by a wounded Man City.
Burnley 1-0 Norwich City: Sean Dyche to teach Norwich a Premier League lesson.
Everton 1-1 Sheffield United: This is a game Everton should win … which is why they won’t.
Newcastle United 0-1 Brighton: Everyone will jump back aboard the Graham Potter hype train.
West Ham 3-1 Manchester United: Every weekend there’s an upset, but don’t expect one here. Hammers to win easily.
Crystal Palace 2-0 Wolverhampton Wanderers: Wolves will rock up to Selhurst with shades on and telling everyone to shush. Classic Europa hangover.
Arsenal 3-1 Aston Villa: Three goals for a rampant Gunners front-line and a own-goal at the back for (insert any Arsenal defender here).
Chelsea 2-4 Liverpool: Jurgen Klopp’s side will continue their perfect start, but jeez didn’t Chelsea’s young lads play well?